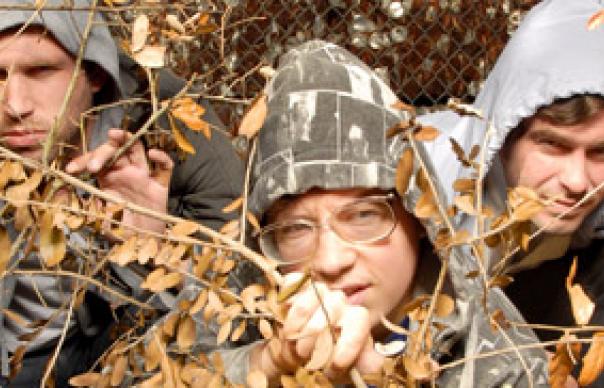 White Denim pretty much define the idea of a ‘glorious mess’. For a moment, on playing their first single, the terrific “Let’s Talk About It”, it was possible to think that this might be a hot new, entirely marketable garage band in a similar way to how, say, The Strokes, or The Hives once were. By the time the single had unwound, broken down, and kicked magnificently back in to life, it was blindingly obvious that nothing so simple could possibly be the case.

As this great debut album unfolds (at times, completely unspools), it becomes apparent that’s how this Austin, Texas band prefer to go about things. A band plugged into some recognisable sources – Black Flag, Minutemen – but with some arguably far less recognisable ways of doing things, not least their penchant for mildly psychedelic digressions, White Denim have made a garage-rock album that at the very least forces you to think differently about your garage.

At times, as on “Darksided Computer Mouth”, with its crisp guitars, and the ironic declamations of singer/guitarist James Petralli, the band can sound like some primal version of LCD Soundsystem. Certainly, throughout Workout Holiday, in spite of initial appearances, the band proves themselves unable to take the route one option with their guitar music: as with the MC5-in-dub of “All You Really Have To Do” or the looped Afropop of “Don’t Look That Way At It”, they’re unafraid of casting their net wide and weird to create their desired effect.

But while LCD use this formula to produce polished, minimal dance/rock, White Denim do so and create an impressive, maximal splurge. They’re a marvellous vision of disorder, perhaps the Dorian Gray-like picture in James Murphy’s attic.

In the end, that may be the band’s best trick. This is undoubtedly music that has been thought out, strategised and worked over again and again, but it couldn’t sound less like it. Ultimately, Workout Holiday is a party record for thinking people, and it’s a smart time to join them.