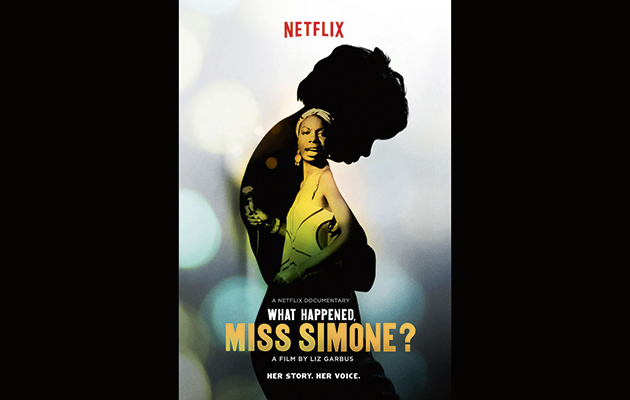 In 1976, Nina Simone performed at the Montreaux Jazz Festival. Dressed in a knee-length brown dress, she strode onstage, took a low, long bow and then stood for 30 seconds, long enough for the audience applause to die down and then, slightly self-consciously, rise again. Watching the footage of this at the start of Liz Garbus’ documentary, you’d be forgiven for finding Simone’s response to such adulation rather strange. Her facial expression appears blank and distant, while her body language is imperious; it’s hard to tell whether or not she is happy to be on this stage.

As Garbus’ film unspools, it becomes evident that this reaction was typical not only of Simone’s complicated relationship with her success but also indicative of her own emotional state. As many of those friends, family and former colleagues attest, being Nina Simone was a difficult business to maintain. “She paid a huge price,” admits her daughter, Lisa Simone Kelly. “People seem to think that when she went out on stage that was when she became Nina Simone. My mother was Nina Simone 24/7. And that’s where it became a problem.”

Accordingly, Garbus’ film weaves together Simone’s public successes with her personal struggles. From a dramatic point of view, she is fortunate that much of Simone’s tumultuous career took place on camera. Here the singer is being introduced by Hugh Heffner’s to viewers on his Playboy’s Penthouse show in 1959; playing at the Newport Jazz Festival a year later; asserting “Freedom is to me no fear,” during a filmed interview in New York in 1968. Indeed, much of What Happened, Miss Simone? is essentially narrated by the artist herself, the voice over assembled from hours of audio tapes.

The beats of her life are remarkable. She dreamed of becoming the first black concert pianist; she changed her name from Eunice Waymon to avoid offending her religious mother; she married an ex-NYPD officer who helped turn her into a star; radicalized, she performed “Mississippi Goddamn” during the Selma-Montgomery march in the presence of Martin Luther King. Cripped by depression and bipolar disorder, she played gigs in Paris cafés, barely able to support herself financially. It’s evidently rich material, although Garbus’ rather programmatic approach doesn’t quite allow for the digressions the film merits on occasion. Hopefully a wider release will follow from its Netflix transmission.

The August 2015 issue of Uncut is in shops now – featuring David Byrne, Sly & The Family Stone, BB King and the death of the blues, The Monkees, Neil Young, Merle Haggard, the Only Ones, Flying Saucer Attack, Ezra Furman and more.