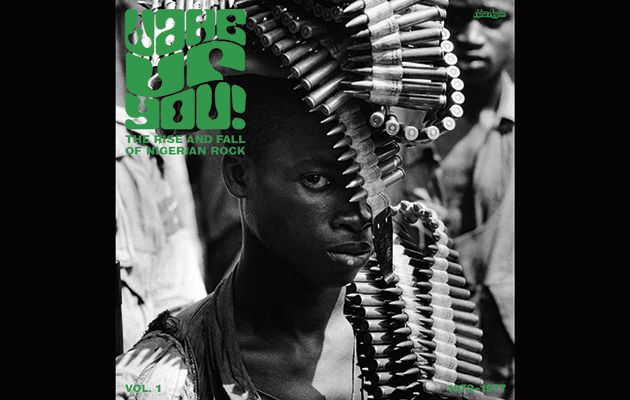 If Wake Up You!, Now-Again’s excellent two-volume selection of Nigerian rock moves from the ’70s, is haunted by anything, it’s the spectre of the Nigerian civil war of the late ’60s. With three million dead from the civil war, and the Biafran secession effectively quashed, the government encouraged Nigerians “to return to whatever they were doing before July 1967”, according to the set’s liner notes – the kind of wholesale process of forced denial/repression that always bubbles up, somehow, through culture’s various avenues of expression. For Nigerian musicians, many of whom were from the East of Nigeria and were called back there during the secession, the after-effects of the civil war ricocheted through their new songs, singing out a febrile, scorched Nigerian rock that gets more furious the deeper you dig into these compilations.

Indeed, the general rule with Wake Up You! is, the wilder things get, the better. There are plenty of good-to-great tracks here that balance the various threads feeding into Nigerian rock at the time – early experiments with Merseybeat, the nascent grind and sweep of Fela’s Afrobeat, the sensual cathexis of soul – but it’s the turn towards psychedelia and acid rock that gives certain cuts here an almost indefinable ‘x factor’. The whiplash sting of the guitar in Aktion’s “Groove The Funk”, the heat-warping wah of Wrinkar Experience’s “Ballad Of A Sad Young Woman”, and the blasted, almost metallic contours of War-Head Constriction’s “Graceful Bird” and “Shower Of Stone” all speak to an everyday experimentalism that has the players turning the amps to 11 and figuring out exactly what can happen when distortion, feedback and the huffing energy of high volume carve the air.

Being slugged in the gut by slow-moving acid gems like Jay U Experience’s “Baby Rock” is reason enough to spend some time with the two volumes of Wake Up You!, but the way compilers Uchenna Ikonne and Eothen Alapatt (the head of Now-Again) contrast this with more ‘standard-order’ fare – songs whose instigative groove and tangled six-string riffs point more clearly toward the players’ grounding in soul and pop moves, fed through aesthetic parameters borrowed from highlife – serves the dual purpose of great overview compilations: education and edification. While Nigerian music is hardly an untapped field, Wake Up You! offers several new and surprising entry points to the music, and quietly, but smartly, writes another narrative, one where significant figures such as Fela Kuti are at one remove from the story’s centre. In many ways, it’s the players documented here that were the beating heart of Nigerian rock, and it’s welcome indeed for them to finally have their moment.

EXTRAS 8/10: Both volumes are presented in hardback book form, with excellent, in-depth text from Ikonne.