Dirty dance-punk with Mark E Smith at the Mic 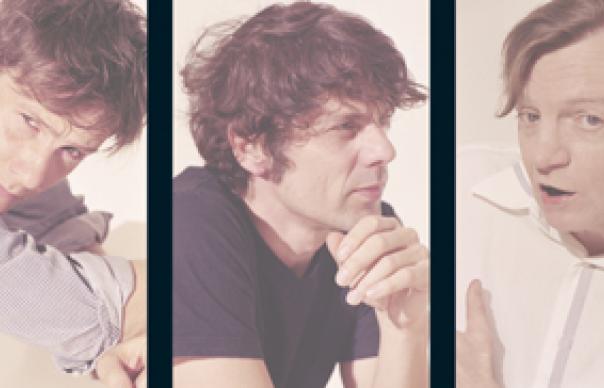 With his insistence on “repetition, repetition, repetition”, The Fall’s embrace of Teutonic trance on Hex Enduction Hour and the nifty cover of Sister Sledge’s disco masterpiece “Lost in Music” on Infotainment Scam, Mark E Smith has always intimated that he would make very fine, if a bit oddball, dance music. Smith’s coy long-distance flirtation with the dancefloor finally becomes a full-on crush on Von Südenfed’s Tromatic Reflexxions, the first album by Smith and Mouse on Mars’ Andi Toma and Jan St Werner.

On the face of it, this may seem like an odd pairing – Mouse On Mars’ tactile and complex digitalia with Smith’s cantankerousness. But as Mouse On Mars have proved with their records with percussionist/vocalist Dodo Nshiki, electronica often works best with a bit of grit in the machinery. Smith, of course, is not just a bit of grit, but full-on abrasion – which Toma and St Werner use to good effect.

Opening track “Can’t Get Enough” is the snarling disco-punk sound that LCD Soundsystem’s James Murphy has had in his head for the past six or seven years. “The Young The Faceless And The Codes” shows what a perfect foil a good old-fashioned acid squelch is to Smith’s free associative rambling, while on “That Sound Wiped” Smith’s ranting and raving becomes nothing but raving.

The album also showcases a more nuanced vision of Smith the vocalist than we usually get to see. “The Rhinohead” is all bopping bubblegum Northern Soul filtered through techno (and the closest Smith gets to sweetness and light), while the rather wonderful “Dear Dead Friends” features Smith delivering a wistful, drunken-sounding elegy over music that is halfway between Nigerian juju and Van Dyke Parks.
Without the focus of The Fall’s coiled rhythms, Smith can veer a little too much into Shaun Ryder territory and Toma and St Werner don’t do enough to rein him in. That aside, this is the kind of exploration of space and motivation that the dance-punk scene is supposed to be about.

UNCUT:How did the project come about?
Jan St Werner: The initial spark was a concert that Mark attended that we played in London as Mouse On Mars. It was quite a harsh set and quite ecstatic. I think he was quite into the music and said it was one of the best gigs he saw in the last couple of years. We didn’t take it too seriously, but he had this idea to do something together.
Are you a “band” then?
It’s a weird project because it doesn’t have the usual procedure of how you form
a band, because it’s very unconventional. In the end we define ourselves as a soundsystem basically. We would be like a huge boombox and Mark is the MC.
How was Mark to work with because he has a reputation as a bit of a control freak?
I think the reason this record exists is that it was easy. Mark is incredibly efficient. I don’t know what it’s like with The Fall, but this was all easy. Maybe by the third album when we become prog, it will be more complicated.