Violent Femmes – We Can Do Anything

Back at last, with a fresh and natural ninth 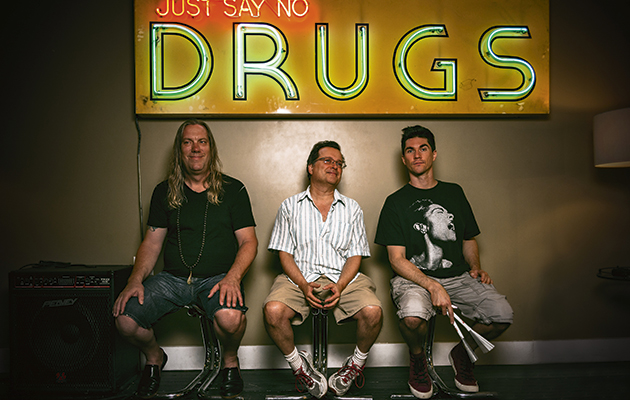 Not so much a boast as an expression of amused incredulity, the title of Violent Femmes’ ninth studio album is an acknowledgement that few comebacks have ever been quite so unlikely. Arriving 16 years after their last studio record, and some 33 since Gordon Gano, Brian Ritchie and Victor DeLorenzo first patented their frenetic, fantastically snotty blend of folk, punk, indie and country, We Can Do Anything is a testament to sheer cussedness as much as an act of renewed creativity.

Violent Femmes’ first two albums – 1983’s exuberant eponymous debut and its darker, more explorative follow-up, Hallowed Ground – remain essential, and they were rarely less than terrific during the ’80s, but the quality tailed off following 1991’s under-rated Why Do Birds Sing? and the departure of DeLorenzo in 1993. In the aftermath of the underwhelming Freak Magnet in 2000, Gano’s decision to licence their classic single “Blister In The Sun” to a burger company infuriated Ritchie, who sued his bandmate while declaring that he had “lost his songwriting ability many years ago”.

And that, it seemed, was that, until the bulging coffers of Coachella inspired a change of heart. Faced with an offer they couldn’t refuse, Violent Femmes reformed for the festival in 2013, and began touring again. Last year they released a new EP and started work on We Can Do Anything, recorded piecemeal in several US studios, with Gano, Ritchie and Dresden Dolls drummer Brian Viglione joined by a handful of old friends.

It wasn’t always easy, according to Gano, whose muse appears to be a more elusive mistress than she once was. We Can Do Anything clocks in at a mere 30 minutes. Three of the ten tracks are co-writes, one is a cover, and the rest are based on ideas which date back years, sometimes decades.

Given this fragile state of affairs, they wisely choose to play to their strengths. This is an instantly familiar mix of anti-folk, post-punk, phantasmagorical country and alternative rock, delivered via an equally recognisable blend of raw acoustic guitars, thrumming acoustic bass and rattling snare, garnished with Gano’s petulant whine. The singer was at school when he wrote the first two Violent Femmes album, and even at 52 he appears to be in an arrested state of aggrieved teenage-hood, locked in psychological warfare with mocking jocks and sneering prom queens. The album’s stand-out track, “Big Car”, dates back to the late ’80s and is a macabre revenge fantasy which begins with Gano cruising with a high-school “teenage tart”. With each verse the mood darkens, until the final line delivers a brutal sting in the tail.

It’s classic Gano – simultaneously funny, transgressive and deeply unsettling. He’s rarely shy about letting his hang-ups hang out. “Foothills”, which recalls the carefree stomp of “American Music”, casts him as a grudge-holding menial – “my boss is a jerk” – while “Issues” is an amusing portrait of a man outwardly scornful of his partner’s over-sharing, but secretly turned on by their relentless neediness. Upbeat opener “Memory” manages to be both regretful and spiky. Even “I Could Be Anything”, the child-friendly tale of a heroic dragon-slaying knight called Sir Bongo, turns into a bizarre underdog fantasy. Leaping between several different styles and time signatures, it’s the most eccentric and musically complex track on the album.

Everything feels remarkably fresh and unforced. The deceptively sweet-toothed doo-wop of “Untrue Love” might seem a tad rote, and the herky-jerky “Travelling Solves Everything” is a misfire, but the reflective, heartfelt “What You Really Mean” better indicates the depth of quality. Written by Gano’s sister, Cynthia Gayneau, and fleshed out with soft horns and rippling piano, it harks back to the unabashed tenderness of “Good Feeling” and “I Know It’s True, But I’m Sorry To Say”.

All that’s lacking are the lowering shadows which appeared on the greatest Violent Femmes record, Hallowed Ground. Gano’s father was a Baptist minister, and many of his best songs are soaked in old-time religion. There’s none of that holy terror here, sadly, although the ramshackle country-gospel of “I’m Not Done” finds Gano “wild in the sight of God”.

It’s the closing track on an album which works equally well as a final curtain or a new chapter. The band themselves seem unsure which it might turn out to be. “We came together, we broke apart,” Gano sings, throwing out mixed messages to the last. “It has ended; it will not restart.” And yet, “With all of this, we’re not done.” Here’s hoping.

Q&A
GORDON GANO
Given all that’s happened, Violent Femmes seem remarkably well preserved. Absolutely! It sounds fresh and natural. People ask, ‘Is it similar to how it used to be?’ It’s more than similar, it’s exactly the same! The majority of it was recorded live, and in some cases it was the first time people were hearing these songs, so it’s very in-the-moment. I find the title humorous, because for us all to get in one room at the same time and play some songs, we’ve done something miraculous.

What is the provenance of these songs?
They date from all over. Probably the oldest are “I Could Be Anything” and “Big Car”, they go back 25 years or so. I’ve attempted to play “Big Car” with Violent Femmes over the years, and there have always been dissenters. It almost didn’t make it this time. It’s a fun song, then it’s really creepy, and then this horror takes place, but I made the argument that if we dropped it for those reasons then we shouldn’t be watching any Coen Brothers movies either. And of course there are other songs like that in our catalogue.

What does the future hold?
We always take it a piece at a time. We have a tour booked in Australia and New Zealand, and we hope to get to the UK and Europe. I hope it all comes together, but let me check my email and see what happened today!
INTERVIEW: GRAEME THOMSON