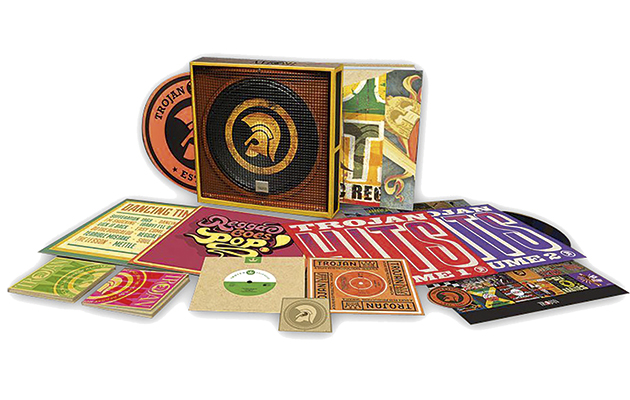 Celebrating their 50th year in operation as a record label, the release of The Trojan Box offers a germane moment of reflection on the achievements, and the cultural significance, of this most august of reggae labels. There may be imprints that have greater cachet with aficionados of the genre – Wackies, Black Ark, Firehouse, Jammy’s, more recently, reissue houses like Blood & Fire, Basic Replay, Pressure Sounds – but it’d be  hard to take any reggae collection seriously that didn’t carry its weight in  the Trojan catalogue.

In many ways the home of reggae in the UK, Trojan’s always had an understated yet central presence in the popular music landscape – digging into The Trojan Box, it’s sometimes surprising to realise just how many of reggae’s key tracks were released by the label. But Trojan’s beginnings, under nascent independent, Island Records, to make available the productions of Duke Reid, aren’t particularly auspicious. Indeed, from the box’s accompanying essay, written by reggae historian Laurence Cane-Honeysett, you get the sense of a label often at the whims of industry sentiment and business practices, and particularly sensitive to popular culture’s relationship with reggae.

One of the revelations of The Trojan Box is the reminder of reggae’s extended presence in the charts, that it was a fundamental part of pop music for several decades. These days, reggae’s presence in pop music is dispersed across the field – you can hear echoes of reggae and dub in pop’s production, its understanding of audio-space, and in the narrative line drawn from emceeing and toasting through rap and hip-hop. But reggae was big pop business across the ’60s and ’70s, with Trojan at the forefront, scoring an early No 1 with Dave & Ansell Collins’ 1970 hit “Double Barrel”, also sending Desmond Dekker, Bob & Marcia, Jimmy Cliff, and countless others into the higher echelons of the British charts.

It’s no surprise, then, that Trojan should top-load The Trojan Box with their hits. The box in its entirety is an imposing thing: four LPs, two 7in singles, and two triple-CD sets, the latter including 69 songs landing on the format for the first time. Start with the LPs – two volumes of Trojan Hits, Dancing Time, and Reggae Goes Pop! – and you have a near-peerless summary of Trojan’s significance to pop. Trojan Hits Vol 1 starts with their first chart hit, Tony Tribe’s “Red Red Wine”, veers sideways with The Upsetters’ deadly “Return Of Django”, and lands soon after with Symarip’s “Skinhead Moonstomp”: in these first three songs, you’ve got the landscape of reggae in its most populist, accessible forms.

From there, the set’s an index of many of reggae’s possibilities – Bob & Marcia’s “To Be Young, Gifted & Black” is an early gem, and a cogent reminder of the activist identity that was core to reggae; Nicky Thomas’ “Love Of The Common People” features a great voice that never really got its due, with Thomas as one of reggae’s more intimate, eloquent presences. Later, Ken Boothe’s “Everything I Own” is a welcome reminder of the rich, heartbreaking timbre of someone  who’d have good claim to be reggae’s finest vocalist.

Things get heavier on the Trojan Mix triple-CD sets. There’s a particularly thrilling run of music on the first set, kicked off by Sugar Minnott’s luscious “Ghetto-Ology”, that explores the wilder terrain of reggae and dub – spatially wrecked, melancholy yet fierce, socially conscious, songs like Tristan Palma’s “How Can A Man Be Happy” are devastating in their simplicity, their directness; early digi-dub experiments, like The Ethiopians’ “Pirate”, its simple Casio rhythm gifting the song’s chant a fragile, DIY backbone, push the music in other directions. Trojan clearly understood that reggae, at its greatest, nestled melody and experimentation  next to each other.

The whole thing closes with a few personal gems – Susan Cadogan’s “Hurts So Good”, Ken Boothe’s “Sad And Lonely”, and Louisa Mark’s “Keep It Like It Is” – each song a different take on the yearning that is, for many, at the core of reggae. It’s a beautiful, and oddly understated, way to cap off a set that captures just how Trojan has helped direct the cultural conversation around reggae for decades, all while releasing some of the genre’s finest songs.

Extras: 8/10. Alongside the music, The Trojan Box comes with a 116-page book, Trojan: Art Of The Album, that focuses on cover art over the label’s 50 years, with annotations, and a brief introductory essay. It’s an odd assortment of cover art, mapped out chronologically, that reinforces one thing very clearly: the label’s design decisions in the digital age aren’t a patch on their LP cover art, which could be profound, corny, gorgeous and unexpectedly moving, all at once.  The box also comes with a slipmat, A2 poster, patch and  7in adapter.