Fine chronicle of subcultural bands behind the Iron Curtain 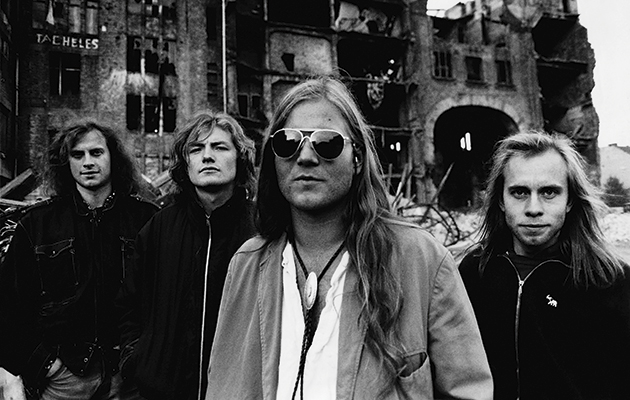 Recording at West Berlin’s Hansa Studios in the late ’70s and ’80s, in the shadow of the Wall, David Bowie and Depeche Mode infused their music with the monochrome gloom of the Iron Curtain. On the other side of the checkpoints, however, musicians were actually operating, and rebelling, in that Soviet dystopia.

For the subcultural East German groups chronicled on Ende Vom Lied, playing punk and avant-garde music was an act of genuine rebellion that could easily have got them banned, censored or worse if their songs were too critical of the ailing Deutsche Demokratische Republik. Without easy access to studios, groups like Herbst In Peking, Planlos and Ornament & Verbrechen were forced to primitively record themselves and release their music on cassettes, often with hand-drawn covers.

Western literature was difficult to come by, but music was a different story. “Radio waves don’t stop at iron curtains,” says Rex Joswig, leader of Herbst In Peking. “Radio was the medium – especially John Peel on Radio 1 – through which we’d hear things, as well as cassette tapes on which all the good stuff was copied.”

Christened Die Anderen Bands – “the other bands” – these musicians took inspiration from the likes of Sonic Youth, The Velvet Underground, Beefheart, The Stooges and punk, and West German groups such as Einstürzende Neubauten. With no state-approved channels for their music, there was no hope of success for these bands – they really were doing it for the music, in the spirit of rebellion and self-expression.

As a result, a sense of unbridled experimentation reigns on Ende Vom Lied: Magdalene Keibel Combo’s “Stahl Daab” is a dubbed-out, echoey instrumental, and 3tot’s “Hintere Gedanken” a twisted Weimar cabaret of piano and cracked vocals, while The Lonely Moon’s glowering cover of Tom Verlaine’s “Kingdom Come”, also covered by Bowie on 1980’s Scary Monsters, is transgressive darkwave. Perhaps best of all, Der Expander Des Fortschritts’ six-minute “Fremdgehen Durchs Land”, from 1990, moves from stentorian chanting to a grinding waltz that, wonderfully, sounds something like Can jamming with The Durutti Column.

The STASI, were unsurprisingly keen on keeping an eye on Die Anderen Bands, and Joswig tells of one band which featured two state informers in their lineup. “Two members of Firma gave information about other people to the STASI. Firma was actually a slang word for STASI… That’s the East German sense of humour.” Herbst In Peking, whose Fall-like “Parade” is another highlight, found themselves in trouble when, in 1989, they proposed a minute’s silence onstage for the victims in Tiananmen Square. “After that, the band’s permission to play was retracted because of anti-socialist propaganda.”

Most of the acts chronicled on this fascinating record, such as Grabnoct, The Lonely Moon and Andrea’s Auslauf, went quiet once the Wall came down in 1990, but others, such as Herbst In Peking and Ornament & Verbrechen, went on to success in the new, unified Germany. Either way, these pioneering groups had undoubtedly done more to smash the system than any Western punks could claim.