Thunder thunder, lightning ahead! Now dark and even longer - a revolutionary album turns 20... 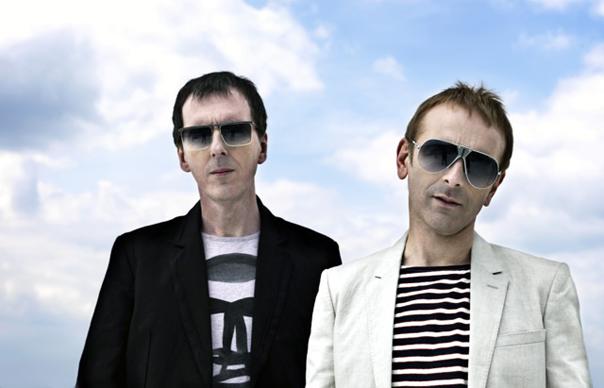 Thunder thunder, lightning ahead! Now dark and even longer – a revolutionary album turns 20…

At the turn of the 1990s, Karl Hyde took a job in The City. His synth-rock group Underworld had been through two albums and three lineup changes in three years, and had got nowhere but dropped by the Sire label. It had been seven years since Hyde’s only brush with success, an electropop group called Freur whose “Doot-Doot” had got to Number 17- in New Zealand.

His partner in both Freur and Underworld, Rick Smith, was still beavering away in the home studio in Romford, Essex that the pair bought with advances, experimenting with techno, refusing to give in. But Hyde couldn’t pay the mortgage from playing guitar, and earning regular money felt good. Maybe some things just weren’t meant to be.

Then, stuff happened. Hyde was asked to work on an album project in Los Angeles. He would have to leave his job. Stupidly, wisely, he did. The project moved to Paisley Park, Minneapolis, and suddenly Hyde was hanging out with Prince. Then he got a phone call asking him to join Debbie Harry’s band as guitarist for a world tour that took in shows with Iggy Pop and at Wembley Stadium. Hyde was fulfilling childhood dreams but, while he did so, he continued to write lyrics every day, taking a notebook on journeys around Minnesota and New York and capturing everything that he saw, heard and felt, until he had notebooks full of lyrical collages; snatches of conversation, surreal takes on passers-by, inspired by his favourite recent album, New York by Lou Reed.

Hyde returned to Essex feeling vindicated and found that his old partner Smith had been working with a local 19-year-old DJ called Darren Emerson. Emerson had helped him strip the tired rock and pop clichés out of Underworld’s sound and make techno fit for discerning dancefloors. Hyde had a choice: give up music for cash and security, or take all this new impetus and have one last stab at making a great album. So Hyde waved goodbye to a promising career in financial services and the trio set about making a record that reset the boundaries of what dance music could do, and who it could reach. Good choice.

Time has been very kind to Dubnobasswithmyheadman, perhaps the only third album that everyone – including its makers – counts as a debut. Its nine tracks of slick, bass-heavy undulations are expertly arranged to rise and fall like high-speed train journeys, as futuristic as the best of Kraftwerk or The Human League. But they also find space for Hyde’s whispered, mumbled and hollered observations of chaos, both urban and personal, and of his unfettered horniness.

The opener, “Dark & Long”, sets the tone, not just for the arm-wrestle between bliss and discomfort of the rest of the album, but for Underworld – a dark, long career of dark, long songs. They could be about night-time loneliness, about filthy sex, or they could just be the last live banger as blackness envelopes the festival site.

But if the sleek, multi-dimensional techno tunes “Dark & Long”, “Mmm… Skyscraper I Love You”, “Cowgirl” and “Dirty Epic” were destined to become Underworld’s live anthems, it is the three slower, more contemplative tracks that reached out to non-dance fans and provided the in-vogue ‘chill-out’ moments. They reinforced the sense of dubnobasswithmyheadman as a perfectly conceived album, with dynamic highs and lows and a variety of complementary moods.

“Tongue” replaces BPM with dreamy guitar and birdsong, “River Of Bass” is slick white reggae, and eco-anthem “ME” (aka “Mother Earth”) is the album’s risky closer, tinkling Balearic pianos, shuffling baggy beats, and harmonies pulled straight off a late ‘80s Pet Shop Boys B-side. It works purely because it stands in such opposition to the pounding beats and urban danger that has gone before; the friendly pop calm after a storm of sinister late-night scenes.

The four discs of extras that comprise the full 5CD deluxe package will thrill completists, but perhaps blur the picture by prizing quantity over quality. Nevertheless, it’s fascinating to hear Underworld move from the dodgy funk-rock of 1992’s “The Hump” to the astonishing “Rez” in just a few short months. “Rez” is Underworld’s Eureka moment; an almost “Baba O’Reilly”-like synth oscillation, gradually, expanding into a sleek, undulating epic.

Previously unreleased work-in-progress versions of “Dark & Long” and “Mmm… Skyscraper…” are fascinating, too. Here, the trio – and Hyde in particular – are still feeling their way tentatively towards the definitive Underworld sound, struggling to connect words and melody lines with beats. “Can You Feel Me?” and “Birdstar” were pre-Dubno… rejects and it’s easy to hear why, still rooted as they are in mid-Atlantic dance-rock, like INXS without the Stonesiness.

The seven tracks culled from a home studio rehearsal for 1993 Underworld live shows are more evidence of a confused band suddenly becoming a cutting-edge powerhouse, casually inventing stadium techno in a small room in Romford in front of a few friends and family.

But it’s the nine tracks that comprise the original Dubnobasswithmyheadman that you’ll return to again and again. On the still-stunning “Dirty Epic”, Hyde implores the listener to “Ride the sainted rhythms/On the midnight train to Romford” amidst multi-layered electronic noise so rich, deep and visceral that you want to believe that Romford is as evocative a destination as Georgia. Thankfully, for Underworld and us, Karl Hyde believed enough to choose it over L.A., Minneapolis or the filthy lucre of London’s square mile. Twenty years later, the results of that crazy belief still sound like dance music’s dirtiest epic.

Extras: Four discs and 32 tracks of contemporary singles and remixes, unreleased demos (including the tracks featured in an alternative version of Dubno… that Underworld posted online in 2008) and a live in-studio rehearsal from 1993. Comprehensive and sometimes interesting, but even the most committed Underworld nerd might struggle to love six long, long versions of “Mmm… Skyscraper I Love You”.
7/10
Garry Mulholland

Q&A
Karl Hyde
For many, Dubnobasswithmyheadman was the first post-acid house dance album that actually sounded like an album, as opposed to a collection of singles and filler. It therefore re-invented dance as a festival or stadium-friendly genre that rock and indie fans could understand. Do you agree?
“I do. Just after its release we played a Megadog all-nighter at Brixton Academy and I remember looking out into the audience and it was like oil and water. There were pockets of indie kids and larger areas of dance kids and they were all looking at each other as if to say: “What are you doing here? This is our band!” It was like standing on a bridge and watching two banks of a river coming together.”

Where did the title come from?
“It’s something that Rick had written on a DAT or cassette box that I misread. A Russell Hoban-ism.”

You and Rick Smith had been at it for 14 years before Dubno… finally brought you success, acclaim and critical respect. Had there been times when you’d both wanted to give up?
“Oh yeah. Around 1990-91 I got a job in The City because I couldn’t get any work in the music business. It was fantastic going to work and getting paid and writing lyrics in my lunch hour and the people I worked with were more interesting than most I’d met in the music industry. I wavered. But something said… just give it one more go.”

Is it true that you were working as a session musician at Paisley Park while Rick Smith and Darren Emerson were connecting back in Essex?
“Yeah. I spent about two months working on an artist’s album while Prince was putting together the New Power Generation. I met Prince a couple of times in the kitchen. Seemed like a nice guy. Miles Davis was in town, along with Sheila E, The J.B.’s and Jimmy Jam and Terry Lewis. I saw one of Miles’ last shows, playing at Prince’s club Glam Slam. There are definitely recordings out there of Miles and Prince jamming. Then I played guitar on tour with Debbie Harry and Chris Stein. I got to play at Wembley Stadium and tour with Iggy Pop. I come from a football family and as I was rubbish at football it was the only way my Dad was ever gonna see me play at Wembley. It was really important for me because I hadn’t 100% committed to dance culture and I needed to get something out of my system, do things that I’d dreamed of as a kid. Then I could put a line through that and say, ‘Right – now what are we doing?’”

What did Darren Emerson bring to Underworld?
“His youthful attitude. Encouragement when I felt discouraged in myself. For example, I wanted to sell my guitars. I was fed up with people blasting away over a dance beat. But it was Darren, who was a Beatles fan as well as a 19-year-old DJ on the house scene, who said, ‘No, you’re wrong. It sounds Balearic.’ It was useful to have a barometer of what worked on the scene to check things with. And I loved his devil-may-care enthusiasm. I’d spent ten years trying to look right in front of a camera and mimic people who were successful. Darren just didn’t give a fuck.”

It now feels like an album about sleazy sex in London, Essex and New York. Is it?
“Ha! Those words were scraped off the streets. It was my job to be a gatherer of real experiences we could use. On previous records I’d been fairly vacuous, so this time around I had to bring something real to the party. So while Rick was working his butt off in the studio I was out in the street having some fairly dangerous experiences because I felt that was important… to go as far as it needed to match a high calibre of music. It had to be autobiographical. And it couldn’t be nice.”

Are your logic-defying lyrics stream-of-consciousness?
“They are logical if I pointed out to you where every lyric comes from. They are mapped journeys. They start at a point in a city and I go to another point and I document the things I see, hear, smell, interjected with things they evoke in me. “Dark And Long” was written in Minnesota on the prairies, with thunderheads coming in. “Mmm Skyscaper I Love You” was walking the midnight streets in Greenwich Village when I was working with Debbie Harry and Chris Stein. I was very much inspired by Lou Reed’s New York album. I imagined him sitting in cafes and bars and eavesdropping conversations and singing conversational American and I thought, ‘I’m gonna sing conversational English.’”

So how do you feel about Dubnobasswithmyheadman now?
“It’s my favourite of the Underworld series. It’s such a magic sound.”
INTERVIEW: GARRY MULHOLLAND