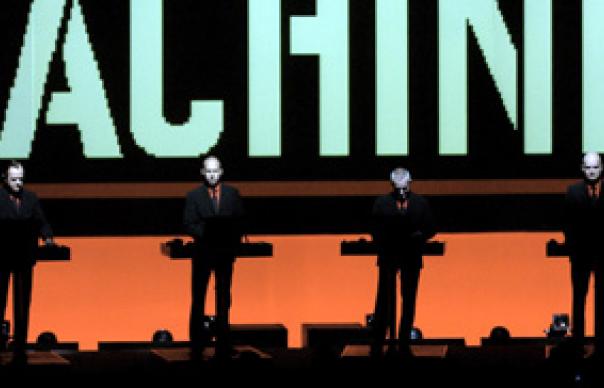 
Nobody ever believes me, but I was watching a talent show on ITV one night in the late ’70s when four blokes came on dressed as mannequins and danced robotically to Kraftwerk’s “Showroom Dummies”. I think they were from Yorkshire, and no, they didn’t win. But what an act! They live on in my memory as a totem of The Bizarre Ways That Britain First Heard Kraftwerk. My own first encounter was in 1975, when “Autobahn” entered the charts the same week as “Wombling White Tie And Tails” and West Ham’s FA Cup song. Truly a Top 40 to die for.

An alphabet of the people they’ve influenced would run to 2,500 names before it even got to Cabaret Voltaire. And yet, for all our clinical theories about innovative electro-pop and minimalist man-machinery, what’s striking about Kraftwerk’s catalogue – eight CDs finally remastered to Ralf Hütter’s satisfaction, after an aborted attempt in 2004 – is that it still comes down to a very basic, non-scientific response: the immediate alertness, pleasure and fascination that Kraftwerk’s icily beautiful textures trigger in our hearts and brains. Hütter and his since-departed colleague Florian Schneider were famous for pioneering tomorrow’s technology today, but they also wrote romantic music that will dance in the air forever. And that’s a clinical theory.

As an adolescent in 1978–79, Kraftwerk were seldom far from my radio. The local station used to play “Kometenmelodie 2” (from Autobahn) and “Airwaves” (Radio-Activity) on its Sunday evening programme for hi-fi buffs, along with audiophiliac Moog voyages by Tomita, Jarre and Vangelis. You switched off your bedroom light, angled your face to the night sky and imagined your small transistor radio to be emitting the pulsating symphonies of faraway planets. Not ’alf!

Thirty years later, the second side of Autobahn(1974) still takes me back to those spooky Sunday broadcasts, and I get a Proustian thrill from the rock’n’roll chords on “Kometenmelodie 2” that sound like Hot Butter playing Status Quo’s “Caroline”. However, the main attraction of Autobahn, of course, is its 22-minute title track, a virtuoso sound-simulation of a motorway journey – from the car door slamming and the engine starting, to the hypnotic white-noise patterns of 130km/h driving. While Kraftwerk can sound metallically stern when they choose to, “Autobahn” is freckled with warmth: sunny vocal harmonies (“…mit Glitzerstrahl”), a carefree flute solo (Schneider) and clever modulations (denoting gear-changes) to break the tension.

As the likes of Bowie and Eno listened attentively, a dark triptych followed. Radio-Activity (1975) begins like a heartbeat in the void, accelerating into the pulse that will form the spine of the title-song, an eerie tribute to the intangibles (music, disintegrating atoms) that linger in the atmosphere. The LP has a musty scent of Old Europe, which proved a hit with the synth groups of 1980-81 (eg, Ultravox and Visage), and it retains a blood-chilling, Wagnerian quality even now, thanks to Kraftwerk’s use of the Vako Orchestron, a choir-like relative of the Mellotron.

Trans-Europe Express (1977) and The Man-Machine (1978) are most people’s idea of Kraftwerk. They move with mother-of-pearl grace, each with a wry pop satire in the centre (“Showroom Dummies”, “The Model”) that allows the grandeur either side to breathe. The sparse lyrics lend themselves to considerable interpretation. Who are the real automatons – the humans or the robots? – is one of the central questions of Kraftwerk. It might be argued that, in an age when we stare into screens for years of our lives, sending emails to people sitting at desks six feet away, a line like “Ya tvoi sluga, ya tvoi rabotnik (I’m your slave, I’m your worker)” is not so much cute as close to the bone. At least the dummies had time to go dancing.

Having clanged a whole lotta metal on Trans-Europe Express, Kraftwerk turned their attention to commerce, with outrageous elegance. Computer World (1981), my favourite of their LPs, is as sensual and soulful as Roberta Flack and Donny Hathaway, yet it keeps up a chattering commentary on its comings and goings (“Business! Numbers! Money! People!”) like an arrivals and departures board in a busy airport. Computer World was criticised for its repetitiveness and short running time (34 minutes), but it’s now rightly regarded as a masterclass in how to construct an exquisite electronic song-suite from the most unsexy ingredients.

Sadly, the remaster is a fiasco. The soft tones of “Computer Love” become sharp, the wide spaces of “Home Computer” contract into tunnels, and “Pocket Calculator” bears down on us like a spiked ceiling in a horror film. Equally poor is the remastered Radio-activity, where atmospheric crackles and hisses have been removed by noise reduction software. For pity’s sake, they’re part of the music! Autobahn, Trans-Europe Express and The Man-Machine have less sound-quality issues, but are all inferior to the original EMI CDs. Anyone planning to buy the 8CD …The Catalogue, would be well-advised to sample an individual remaster first.

Hütter is within his rights to tinker with Kraftwerk’s canon as he wishes, but a botched Kraftwerk remaster series is a bitter disappointment nevertheless. It’s not such an issue, thankfully, with the remaining three LPS: the lean, industrial Techno Pop (a re-titled Electric Café with added track “House Phone”); The Mix (1991), a surprisingly addictive re-imagining of 11 classic tracks in a dancefloor context; and Tour De France (2003), a cycling fetishist’s techno headphone soundtrack with a gorgeous five-note motif. For those who’ll never sport the yellow jersey, have no fear. It also works its magic if you’re on an exercise bike.