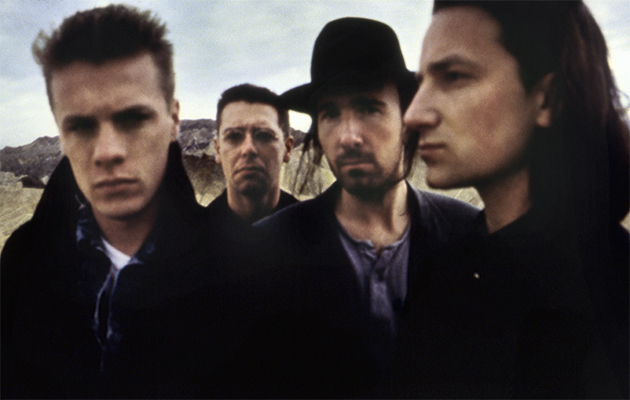 It was almost called “The Two Americas”. Later, briefly, “Desert Songs” was a contender. But U2 finally settled on The Joshua Tree for their fifth LP, a smart title that perfectly encapsulated its cinematic mix of widescreen landscapes and thirsting, quasi-Biblical lyricism. It elevated the Irish quartet into global superstars, sold a staggering 25 million copies and remains an unsurpassed career peak. The aim, according to guitarist The Edge, was to “follow the blues and get into America”. After almost a decade as rootless post-punks with awkward Christian leanings, U2 finally baptised themselves in the mighty star-spangled river of gospel, blues, folk, country, rock and soul. Tightening up their open-ended songwriting methods into more traditional structures, they made a conscious effort to work with the “primary colours” of rootsy Americana.

Produced by the holy trinity of Daniel Lanois, Brian Eno and Steve Lillywhite, The Joshua Tree became a monumental experiment in monochrome myth-making. Musically, U2 borrowed from Dylan, Springsteen, Hendrix, Peggy Seeger, Woody Guthrie and more. Lyrically, meanwhile, Bono soaked himself in a literary pantheon including Norman Mailer, Flannery O’Connor, Walker Percy, Raymond Carver, Allen Ginsberg and many others. It was an audacious collision of vaulting ambition and juvenile arrogance, commercial calculation and cultural appropriation.

But the resulting music was spectacular. From the shimmering gallop of “Where The Streets Have No Name” to the Reagan-bashing military-industrial bombast of “Bullet The Blue Sky”, from the sultry, eroticised languor of “With Or Without You” to the radiant religiosity of “I Still Haven’t Found What I’m Looking For”, this harmonious weave of antique signifiers with gleaming modernist textures still dazzles three decades later. The Joshua Tree remains one of U2’s most consistently excellent albums, and arguably their sole masterpiece. They would never sound this fruitfully innocent again.

U2 are talking up this 30th-anniversary repackage, which comes in “super deluxe” quadruple CD and seven-disc vinyl formats, as a timely political statement, holding up their love-hate romance with Reagan’s America as a dark mirror to Trump. In truth, almost all of this material has been released before, mostly on an expanded 20th-birthday edition in 2007 (the original album here uses the same remaster). The uneven extra disc of outtakes and B-sides is virtually identical, and only of marginal interest to anyone seeking to understand the album’s broader musical hinterland.

New to the official U2 canon, though, is the band’s Madison Square Garden show from September 1987, a solid recording lifted from what sounds like a crisp, professional soundboard mix. Hamming it up like a first-time tourist fresh off the boat, Bono amplifies his mid-Atlantic twang as he shamelessly flatters the New York audience, who naturally lap up every blarney-drenched word. This punchy, dynamic set is notable for the glorious guest appearance by Harlem’s Voices  Of Freedom gospel choir on “I Still  Haven’t Found What I’m Looking For”.  But slightly longer versions of this show have been available in bootleg form for years, so there is nothing here that serious U2 fans will treasure for its missing-in-action rarity.

Indeed, the only fresh material in this whole package is a single disc of newly commissioned remixes, all but one by longtime U2 collaborators and key players behind the original album. Lanois gives good value here, transforming both “Running To Stand Still” and “With Or Without You” into lightly lysergic sci-fi lullabies of weightless ambient gloop. Studio engineer Mark “Flood” Ellis also finds an inventive new angle on “Where The Streets Have No Name”, stripping away the drums and pointillist guitar detail to leave Bono’s muffled voice adrift in a ghostly fog of sonic abstraction. But Garrett “Jacknife” Lee’s burly techno-rock mix of “Bullet The Blue Sky” is mostly boorish bluster, while Lillywhite’s streamlined, shiny update of “Red Hill Mining Town” makes only minor cosmetic improvements.

The sole new name among the remixers is cryptic London-Irish electro duo St Francis Hotel, whose secrecy has led some online fans to speculate they may be related to U2, or at least famous friends. Whatever the pair’s identities, their pleasantly nondescript take on “One Tree Hill” has a warm-blooded, fuzzytronic, vaguely Balearic flavour. Brian Eno also takes a pass at the same track, but his two-minute hymnal “reprise” version is a slender, perfunctory sketch.

Of course, there is a limit to the number of times any band can meaningfully revisit and repackage an album, even a timeless milestone like The Joshua Tree. But it is hard to resist drawing parallels here with Achtung Baby, U2’s only other serious claim on all-time classic status. That album was reissued in 2011 in a super-deluxe 10-disc multimedia edition bursting with remixes, alternate takes, arty documentaries and subversive deconstructions.

By contrast, The Joshua Tree resurfaces  in 2017 heavy with reverence but light  on context. One glaring absence is Rattle And Hum, the sister album and tour film that pushed the band’s sepia-tinted Americana fetish into Spinal Tap-style  self-parody, but which still contained potent and revealing moments. The  84-page book of previously unseen archive photographs by The Edge provides a  nice visual aside, but there are no retrospective documentaries or scholarly essays to help unpack one of U2’s most conceptually rich works. This cautious, conservative repackage may not diminish the greatness of the original album, but it does sell it short.