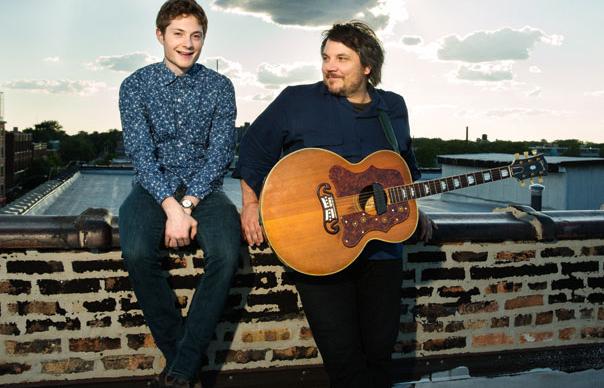 In the three years since Wilco released their most recent studio album The Whole Love, Jeff Tweedy has been busy with a number of impressive extramural activities. As a producer, he oversaw new albums from Low, Mavis Staples and (in part) White Denim. He also helped put together Wilco’s latest Solid Sound Festival, toured alongside Bob Dylan on the Americanarama bill and even found time to cameo in Portlandia and Parks And Recreation. But despite such rewarding creative experiences, other aspects of Tweedy’s life have been far less kind. His elder brother, Greg, died in September 2013 from heart and kidney failure, while Tweedy’s wife Sue was diagnosed with a rare form of lymphoma in January this year.

It’s hard not to imagine Sukierae (a compound of Sue Miller Tweedy’s nickname, Sukie Rae) as engulfed by these two personal tragedies; much as Wilco (The Album) was overshadowed by the death of his former band mate Jay Bennett. Some might scrutinize the lyrics for evidence of Tweedy’s response to his wife’s condition. “No one could protect you from the blood in your own veins,” he sings on “Hazel”; “I’ve always been certain nearly all my life / One day I’ll be your burden and you’ll be my wife” on “New Moon”. Evidence, surely, of an appalling pathos governing the record?

But Sukierae rarely sinks into a miasma of post-diagnosis melancholy. Indeed, the first line of the album’s opening track, the spiky “Don’t Let Me Be So Understood”, is as defiant as it gets: “I don’t wanna give in”. Elsewhere in this issue, Tweedy explains that although work started on this album before his wife’s illness was detected, Sukierae has since assumed a salutary quality. “I’ve been able to make her feel less alone,” he explains. At any rate, Sukierae is very much a family affair. The band consists of Tweedy and his 18 year-old son Spencer on drums – although there is also discreet accompaniment from The Young Fresh Fellows and The Minus 5 bandleader Scott McCaughey on keyboards and backing vocals by Jesse Wolfe and Holly Laessig from indie pop band Lucius.

Of course, this isn’t the first time Tweedy has stepped away from his band duties. In 2002, he released the (largely instrumental) score for Ethan Hawke’s 2001 directorial debut, Chelsea Walls. But Sukierae is a full 20-track affair. Driven by warm acoustic notes, “High As Hello” and “World Away”, establish a honeyed, slightly stoned mood early on. Conspicuously, “Diamond Light Pt. 1” feels the most Wilco-esque of the first batch of songs – especially the scrabbling guitar lines reminiscent of Nels Cline. It also foregrounds Spencer’s skills behind the kit as he manfully sustains the song’s eccentric time signature. Songs like “Wait For Love”, meanwhile, bring to mind the lovely guitar and piano parts in “Country Disappeared” from Wilco (The Album). “Low Key” is one of the album’s few attempts at a straightforward pop song – a less raucous take on “I Might” from Wilco (The Album), if you like – with some charming George Harrison-style “aaah aahhs” from Tweedy, Wolfe and Leassig.

Elsewhere, there are quiet, ruminative moments like “Pigeon” and “Nobody Dies Anymore”. The former, delivered in an intimate near-whisper by Tweedy, is tremendously affecting, despite its opaque chorus rhyming “pigeon” with “religion” and “Mt Zion” with “dandelion”. “Nobody Dies Any More”, which Tweedy says was written after his wife’s diagnosis, nevertheless appears weighed down with a weariness. “Desert Bell” possesses a deep, tormented spirit – “render me down / In a hole in the ground / Mixed with the earth” – while Tweedy’s delicate vocals on “Honey Combed” evoke the fragility of Elliott Smith. As the album winds towards its conclusion, Tweedy seems to consider the possibility of being separated from his loved one – “Will you take me?” he asks on “Down From Above” and “I couldn’t hold you long enough” on “Where My Love”. The frazzled electronic motif on “Slow Love” – reminiscent of the wiry static sound underpinning “Radio Cure” on Yankee Hotel Foxtrot – is a disquieting counterpoint to the song’s warm melodies. Fortunately, the introspective fug lifts for the airy “Summer Noon”, which might just recount Tweedy’s first meeting with Sue Miller at her Chicago club, Lounge Ax: “She spoke to me and provoked my band / And I broke in two in the heart of her hand”. The last song, “I’ll Never Know”, resurrects a memory from childhood concerning his mother; it is simultaneously deeply sad and also comforting.

An album of great depth and richness, Sukierae finds Tweedy at his most dignified, addressing life-changing events across all aspects of the full emotional spectrum, from joy to sorrow. It is, then, nothing short of the whole love.
Michael Bonner

Q&A
JEFF TWEEDY
The album opens with “Please Don’t Let Me Be So Understood”: a really bratty, rock’n’roll nihilist song…
It’s a subterfuge of some sort. There’s not really a concept to the record, but there is some desire to have it be a reflection of growing up. I think it is bullshit to not grow up!

Your songs have sometimes seemed prophetic – as when “Jesus, Etc.” took on a new resonance after 9/11…
I definitely notice that. There’s a lot of images from this record that have become surreal to me. I’m not agreeing with you in any way about a “prophetic” nature. But there’s a lyric – “It won’t take long to find a broken backbone”, in “Nobody Dies Any More”. That was written way before anything happened with my wife’s cancer diagnosis. And one of the ways that we discovered the malignancy in my wife’s bones is that she had a broken backbone, a collapsed vertebrae. And now when I sing that song, I think, ‘Oh my God, that’s so strange.’

What’s the song about?
Well, a lot of lyrics start with something way more specific, and then I get very uncomfortable with things being too spelled out. But Chicago has a horrible problem with gun violence, and it was an attempt to write about that. It still has images of candlelight vigils on crappy, low-income street-corners, with beer being poured out on the street.
INTERVIEW: NICK HASTED