TV ON THE RADIO – NINE TYPES OF LIGHT 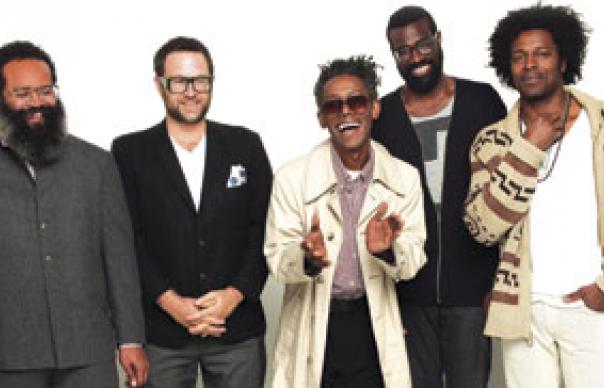 Emerging from their Brooklyn loft-studio in 2003, TV On The Radio rapidly grew to epitomise a musical New York renaissance that owed nothing to The Strokes’ new-wave jangle of two years previous. As their soulful debut EP Young Liars demonstrated, this was a group with rather more visionary ideas in mind: TVOTR’s modernist art-rock combined experimental production with mass appeal, and while their albums have not sold in earth-shaking quantities, the ingenuity of the likes of 2006’s Return To Cookie Mountain marked out the band’s David Sitek as a sort of Eno-like superproducer for the Big Apple set, playing midwife to albums for Yeah Yeah Yeahs, Liars and Scarlett Johansson.

If there’s a common rule to such auteurs, though, it’s that they seldom sit still for long. So after 2008’s Dear Science, Sitek upped sticks and crossed the continent, holing up in Los Angeles and embarking on a solo project, Maximum Balloon. Following 2008’s Dead Science, vocalist/loops man Tunde Adebimpe and guitarist/co-vocalist Kyp Malone also took leave, the former pursuing an acting career, the latter recording as Rain Machine.

Reconvening for the making of Nine Types Of Light, TVOTR looked west to Sitek’s hilltop Beverly Hills abode, and LA’s free and easy spirit appear to have left an imprint on the record itself – as Sitek put it recently, “having a barbecue running the whole time was certainly a different vibe.”

While this record resembles its predecessor, it has certainly soaked up a little sun along the way. The opening “Second Song” is very TVOTR, being both a song about being in love with music, and being a bit geeky about the process of its creation. “Every sonic evolution/Make your contribution/To the light” sings Kyp Malone in tingling falsetto, over scintillating guitars and massed horns. In the past, their lyrics have tended towards the cryptic, but here they are often rather straightforward, and better for it: “If the world falls apart/How’m I gonna keep your heart?” croons Malone on “Keep Your Heart”, a pretty concoction of acoustic guitar and snowy synths caught mid-thaw. The excellent “Will Do”, meanwhile, recalls a mellow Peter Gabriel.

Sitek’s critics maintain his kitchen sink productions are too cluttered, which isn’t entirely unfair – there are times, such as the spiky, percussive “New Cannonball Blues” where you feel the song is stifled by the layers of bleeps, brass and strings. He is learning to hold back, though: see “Killer Crane”, a serene ballad that changes utterly with just the ring of a banjo halfway through. And notably, much of the claustrophobia of the past has lifted, with the record’s more energetic moments tending to feel rather more celebratory than on-edge. “Caffeinated Consciousness” rides an enjoyably lunk-headed riff of horns and cranked guitar, while the Malone-fronted “No Future Shock” is a delirious jive that invents its own end-of-days dance craze – “Do the No Future! Do the No Future!” – in the process.

Elsewhere, the band remain fond of doffing the cap to footnotes of musical history, with “Repetition” riffing on the hook of Dream Warriors’ jazz-rap hit “My Definition Of A Boombastic Jazz Style”. “My repetition/My repetition is this!” chants Malone over shrieking guitars – although elsewhere, the song investigates more disquieting territory, evoking shadowy, Lynchian goings on.

This dark tint filters into Nine Types Of Light’s closing track, “Forgotten”. Powered by low-riding synths, it’s a nocturnal-feeling satire on valley living, from plastic surgery to social etiquette: “Beverly Hills/Nuclear winter/What shall we wear/And who’s for dinner?”sings Adebimpe. It’s an arch look at La-La Land through New York eyes, and the most explicit sign here that TVOTR are far from home. Don’t worry about them, though: Nine Types Of Light suggests they’re settling in nicely.
Louis Pattison