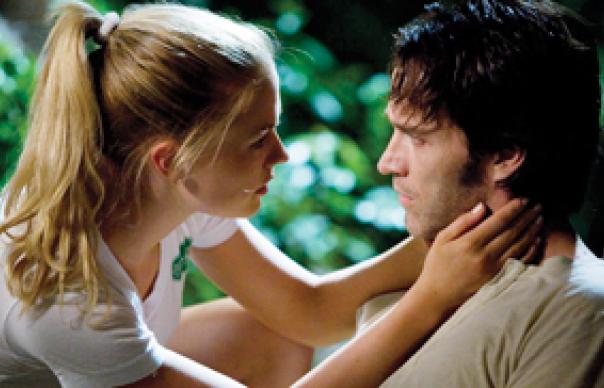 Vampires, as we know, never die. Certainly, they have failed to vanish from the imaginations of US movie and TV producers: from the ongoing Twilight franchise to the upcoming Vampire Diaries, the undead, once maligned as stinky, neck-hungry predators have been rebranded as good-looking metaphors for teen alienation. Perhaps it should come as no surprise to discover that the country that popularised the egg white omelette should now bring us a new dietary option: the bloodless vampire.

True Blood, a show perceived by some to mark a fork in the road for the HBO cable network away from “real life” dramas, and into new and fantastical realms, is mercifully not of this type. From the title sequence on down, it’s evident that we are entering a rawer world. Table dancers, savage nature, vague intimations of voodoo – it may be devised to tell you who’s in the show, but it’s like stepping into a song by Screaming Jay Hawkins.

As it turns out, that’s not far off the truth. Not a series that wastes time on lengthy exposition about what we can expect from vampires (“Say, I took a photograph of Bob, but I find to my surprise he doesn’t appear in the image…”), True Blood gets right down to it. In the same way that EastEnders is seldom detained by discussions of fruit and vegetables, this is a series in which the whole business of being a vampire is taken, refreshingly, pretty much for granted.

In fact, in True Blood’s fictional Louisiana town, Bon Temps, “vamps” are legally permitted to live among regular folks. Their movement is unrestricted, but in the main they stick to their own nitespots – as soon becomes apparent, restaurants, or places to go in the day, they don’t need. Relationships between vampires and “locals” are frowned on, at best, as perverted.

The True Blood of the title, meanwhile, is a placebo drink concocted for the benefit of vampires: a handy way to keep the undead drinking blood within the letter of the law. Most vampires, however, feel about it the same way Seinfeld felt about air travel. Once you’ve sampled first class, you don’t ever want to go back to economy.

At the centre of this swiftly, but vividly drawn community is the romance that slowly develops between waitress Sookie Stackhouse (Anna Paquin) – the, incidentally ESP gifted, heroine of the novel series on which True Blood is based – and a vampire named Bill Compton (Stephen Moyer). Bill, a man of few words seems honourable, but also faintly menacing and is presented very much as one would hope a 174-year-old veteran of the US civil war to look: quite a lot like Mark Lanegan.

As cute as this premise might sound, this is assuredly still an HBO show. There are adult scenes, drug use, and the de rigueur use of “the c word”. And, though it is never beats you over the head, this is a show with some serious and subtle things to say about prejudice.

Not, however, that it plays that way at all. Held together by the romantic narrative of Sookie and Bill, and the incompetent police department’s failure to solve a string of recent and apparently motiveless murders, True Blood’s tone is a meeting point somewhere between Twin Peaks and Gossip Girl, both intriguing, soapy and agreeably flashy.

In common with the former, True Blood also has a roster of superbly watchable minor characters: gay, drug-dealing short order cook Lafayette (Nelson Ellis), Sookie’s perpetually aggrieved best friend Tara (Rutina Wesley), and best of all Sookie’s brother Jason (Ryan Kwanten). While not endowed upstairs, he is supremely talented down, a distribution of resources that leads to many of the show’s finest comic moments.

If there’s a faint suspicion on reaching the end of this first series, it’s that the tying up of loose ends is not exactly at the top of the programme makers’ lists here – one hopes that we’re not heading into a Lost-like world of no definitive closure. As it stands, though, the strength of this ensemble cast keeps True Blood eminently watchable, the real thing, in a world of synthetic blood products. It’s slightly guilty pleasure, certainly. But once you get a taste for it, it’s hard to deny the urge.