Potent two-disc set of The Mule’s onstage artistry, drawn from his 2008 tours of America and Europe. 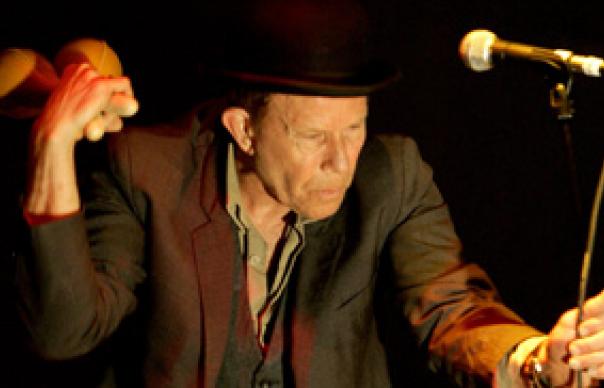 “It’s great,” Tom Waits once opined of the strangely unsatisfying beast that is the live album, “but shouldn’t we have been there?”

The remark says something of the waning status of in-concert albums as souvenirs or proxy musical experiences. When was the last time a live long-player hit a nerve like The Who’s Live at Leeds, The Allman Brothers’ At Fillmore East, or Nirvana’s MTV Unplugged In New York?

Perhaps Tom Waits – with two under his belt already (1974’s Nighthawks At The Diner, 1988’s Big Time) – is resorting to this time-honoured contract-filler because he’s run out of creative steam. Or maybe he wrung out the last drops of his demented farmyard primitivism on recent releases Real Gone and Orphans: Brawlers, Bawlers & Bastards. Following self-parodies like “Clang Boom Steam” and “Don’t Go Into That Barn”, the most radical thing he could do now is go back in the studio with Bones Howe, who produced all Waits’ albums from ’74’s The Heart Of Saturday Night to ’82’s One From The Heart, and a 55-piece orchestra. And that’s not going to happen.

Still, Tom Waits is not a man to put out a live record as a mere stopgap or time-buyer. Those blessed enough to have caught the Glitter And Doom tour will know how much creative reinterpretation went into the sets he performed last year in America and Europe. Few paid less than £100 for the privilege of being there, with assiduous anti-scalping measures making the queueing a nightmare. Inside, the setup resembled an antique pawnshop, with an ancient marching bass drum prominent at stage left. A rack of Waits’ beloved bullhorns stood behind a central platform.

The shows were not easy rides through Waits’ sentimental back pages. “Christ, which one is it?!” he asked rhetorically as he introduced “God’s Away On Business” in Edinburgh. “They’re all good, you know!” Dredged from his darkest depths, the gargled bark of his voice sounded almost monstrous live. Wearing a bowler and accompanying his vocals with pantomime hand gestures that utilised his freakishly long fingers, he could have been a demonic Charlie Chaplin.

Pieced together from shows as far apart as Tulsa and Milan, Glitter And Doom Live is for the most part a thrilling document of Waits’ onstage artistry. For a man fundamentally suspicious of anything hinting at muso chops, he has here assembled a band of near-virtuosos – leavened by the presence of his less-tutored sons Casey and Sullivan – to breathe new life into 17 songs spanning the two decades that separate 1985’s Rain Dogs from 2006’s Orphans…

Gypsy guitar genius Omar Torrez and stellar reedsman Vincent Henry in particular bring a supple sophistication to Waits’ music that he has previously disdained. Heresy it may be to say it, but Torrez’s spine-tinglingly lovely solo on “The Part You Throw Away” – on a bouzouki, if the ears don’t deceive – would not be out of place on a Sting album. Similarly, Henry’s peppy alto-sax homage to Maceo Parker on the funked-up James Brown treatment of “Such A Scream” shows a fidelity to historical detail we don’t ordinarily associate with Waits. The two sidemen also combine to transform the warped waltz of “Circus” into something far richer than its parent version on Real Gone.

Waits wears all his favourite hats here. On “Fannin Street” he’s the bellowing Celtic sentimentalist, on “I’ll Shoot The Moon” a woozy crooner who’s just wandered out of a David Lynch film. Medleyed with Leadbelly’s “Ain’t Going Down To The Well No More”, set opener “Lucinda” is reframed as blues-ballad melodrama in the vein of “House Of The Rising Sun” or “St James’ Infirmary”. “Green Grass” resumes the spooky folk mood of “The Part You Throw Away”, Waits barely rising above the burry whisper of a ghost. More orthodox are “Falling Down” – a power ballad custom-made for Joe Cocker – and the raging blues-rock of “Make It Rain”.

A horn-enhanced cousin to “Such A Scream”, Real Gone’s “Metropolitan Glide” could be Captain Beefheart dabbling in big-band funk. “Goin’ Out West” becomes Duane Eddy’s “Peter Gunn” remixed by the B-52’s, while “Get Behind The Mule” cooks up a swampy, bluesy groove. If there’s a misgiving it’s that a few of the tracks – the six-and-a-half-minute “…Mule” included – drag on for too long. “Trampled Rose”, covered on the Grammy-scooping Plant/Krauss album Raising Sand, doesn’t warrant the five minutes it gets here; nor does a dull “Dirt In The Ground”, with 15-year-old Sullivan Waits playing clarinet alongside Vincent Henry’s baritone sax. Sometimes, too, Waits’ beyond-Beefheart horror vocals are just too much. Maybe his next release should be a death metal album.

The penultimate track on CD1 is a two-minute “Story” – a daft yarn about purchasing “the last dying breath of Henry Ford” on eBay – that intros a performance of “Lucky Day” and serves as an appetiser for “Tom Tales”, 40 minutes of comedic Waits-spiel woven together on a second CD. While not as funny as the standup routines on Nighthawks At The Diner, Waits’ digressions on subjects as peculiar as spam, spiders, parrot diapers and premature burial – culminating in a rendition of the tender “Picture In A Frame” – are always endearing. “It’s hard to find people who are as interested in these things as I am,” he states, but audience responses from Birmingham to Jacksonville suggest otherwise.

As Tom Waits once suggested, you really should have been there. But even if you weren’t, Glitter And Doom Live is an admirable document of yet another stage in his continually engrossing career.