Classy, if disturbing work from the American filmmaker: stars Danny DeVito, Greta Gerwig and a dachshund 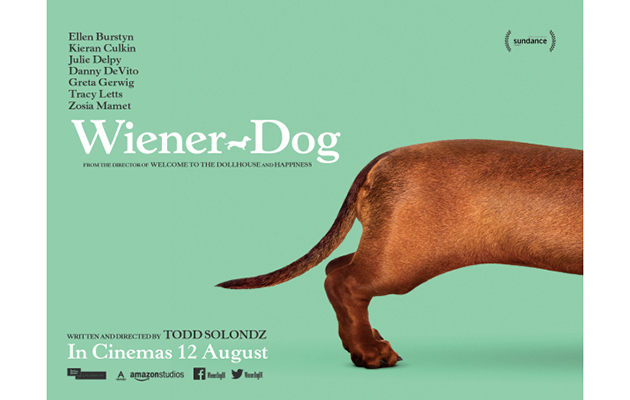 Todd Solondz last film, Dark Horse, posed the question: is it possible to make an engaging film about an imbecilic under-achiever? Here, the director hopes that viewers will invest their goodwill in this yarn about a dachshund as it passes through several owners. These include a middle-age suburban couple (Tracy Letts and Julie Delpy), a veterinarian assistant and her former school bully (Greta Gerwig and Keiran Culkin), a New York film professor (Danny DeVito) and a dyspeptic elderly woman (Ellen Burstyn).

Followers of Solondz career will be pleased to learn that these include returning characters from his breakthrough film, Welcome To The Dollhouse; and that Weiner-Dog circles all Solondz usual filmmaking tropes. The suburbs are hell, all yoga mats and granola bars and manners. In the first sequence, Delpy delivers an exquisitely written monologue about her own childhood pet, a poodle named Croissant, that was repeatedly “raped” by a stray dog named Mohammad. In the second, Greta Gerwig plays Greta Gerwig doing her kookiest Greta Gerwig – here cast as a grown-up version of Heather Matarazzo’s awkward adolescent student in Solondz’ breakthrough film, Welcome To The Dollhouse. The passages with Gerwig and Culkin are – by Solondz’s standards, at least – the most emotionally satisfying in the film.

In a film of long takes and uncomfortable silences, Danny DeVito’s permanent frown perfectly captures the neurotic anxiety at the heart of Solondz’s films. His Dave Schmerz is a not just a discontented teacher, he’s a failed screenwriter, too. Double win! “I have big news,” he’s told at one point by an elusive agent. “It’s going to sound like bad news at first, but I promise you it’s good news in the end.” His attempts to sell his script allow Solondz to dig into Hollywood – elsewhere, his fellow Sundance alumni Richard Linklater and Quentin Tarantino are skewered. Burstyn, meanwhile, gets to deliver the film’s best line. As the infirm Nina, she informs her visiting daughter that she has named the dachshund Cancer. “It felt right,” she says. “Everyone’s dying.”