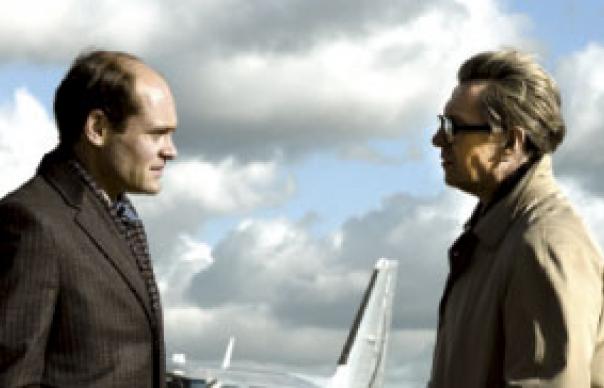 Tomas Alfredson’s murky adaptation of John Le Carré’s novel gives Gary Oldman his first leading role in a British film for 25 years. As the spymaster George Smiley, Oldman is barely recognisable: a quiet, almost anonymous presence with grey skin and grey hair, he peers pensively from behind thick spectacles. We are a long way from the volatile characters he played in a run of mid-’80s British movies, the crazed cops, drug dealers and campy Transylvanian counts from his ’90s Hollywood phase, or his recent supporting roles in the Harry Potter and Batman movies.

Smiley is a man of slow, diligent methods. Fortunately, this is not an action film. The events in Tinker, Tailor, Soldier, Spy occur largely as conversations in darkened rooms between middle-aged men. Sometimes, pipes are smoked. Swedish director Tomas Alfredson brings the same lugubrious air to this adaptation that he deployed so memorably in his 2008 vampire film, Let The Right One In. The colours are grey, the weather overcast. The year is 1974, and the British secret service is not what it once was. The Empire is gone, the Americans are the dominant superpower, and nostalgia for the Second World War haunts the corridors of the Circus, home to le Carré’s secret service. “It was a good time,” reflects retired researcher Connie Sachs (Kathy Burke) glumly. “A real war. Englishmen could be proud.”

The Circus is run like the common room of an English private school, with its clever-clever nicknames for organisational divisions – scalphunters, babysitters, lamplighters – and operations named after nursery rhymes. It’s become sentimental and self-indulgent; “a leaky ship,” admits the Circus’ chief, Control (John Hurt). Indeed, there is a mole embedded high up in the service.

Into this comes Smiley – formerly Control’s high chamberlain but evicted, along with Control, in a coup instigated by the reptilian Director of Operations, Percy Alleline (Toby Jones). Smiley is brought back because he is now “outside the family, and best placed to investigate” the mole. Smiley has appeared on screen before. He was briefly in The Spy Who Came In From The Cold (1965), portrayed by Maigret actor Rupert Davis. James Mason played him for Sidney Lumet in The Deadly Affair (1966), adapted from the first Smiley novel, Call For The Dead; and Denholm Elliott in a 1991 TV production of A Murder Of Quality. Most famously, Alec Guinness took the role for the BBC’s adaptations of Tinker, Tailor, Soldier, Spy (1979) and Smiley’s People (1980).

An air of sadness hangs around Smiley. Cuckolded by a work colleague and aware that the organisation to which he’s given most of his working life is no longer in the peak of health, he seems only to find calm when studying stolen files in a grubby hotel room near St Paul’s cathedral. Alfredson shoots the film like a police procedural – a focus on Smiley’s dogged accumulation and assimilation of facts, and the revelations he unearths that lead to Operation Witchcraft, a Russian source codenamed Merlin and Karla, Smiley’s counterpart at the KGB’s Moscow Centre.

Around Oldman, Alfredson has assembled a commendable cast – Colin Firth, Mark Strong, Ciarán Hinds, Benedict Cumberbatch, Tom Hardy – who keenly bring to life Le Carré’s labyrinthine story of empire-building, treason, petty rivalries and adultery. At two hours, the film doesn’t quite feel long enough to fully serve the 400-odd page novel; consequently some key characters are underdeveloped and part of the plot feels pared back to the point of abstraction. Apart from two flashbacks detailing a botched operation in Czechoslovakia and a dicey attempt to pull a potential Russian defector out of Istanbul, there is very little action here; yet Alfredson gradually, imperceptibly ratchets up the tension. A sequence where Smiley’s lieutenant, Peter Guillam (Cumberbatch), steals files from the Circus is sweaty stuff.

Yet it always comes back – brilliantly – to Oldman’s Smiley, sitting in his hotel room, unravelling Karla’s devious plot. In a paranoid, shifting culture where “nothing is genuine”, we admire Smiley’s vigilant pursuit of the truth.
Michael Bonner