TINDERSTICKS – FALLING DOWN A MOUNTAIN

The return of a cherishable British band 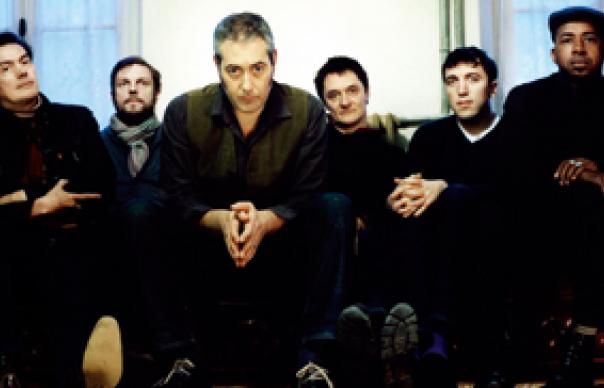 Around the turn of the last decade, a lot of people – not least the band’s own fans, perhaps – had started taking the Tindersticks for granted. A brand name guaranteeing sensitivity and class, sure, but also a force which was, if not spent, at least unlikely to surprise us again. The ingenuity of their early ’90s releases, which saw them hailed as Scott Walker singing for John Barry, or Lee Hazlewood performing with The Bad Seeds, had settled into a rather predictable broodiness. They’d claimed their turf and stuck to it religiously.

After 2003’s Waiting For The Moon, there followed a five-year hiatus for the Nottingham-formed band. An ambivalence about what they were doing had lurked latently for some time: even 1997’s Curtains had been made under the covert working title of “The Last Tindersticks Album”. Now, baritone Stuart Staples released two solo albums while relocating his family to France. He set up Le Chien Chanceux studio, where a slimmed-down lineup convened for informal sessions resulting in 2008’s The Hungry Saw. Live shows proved fruitful (not least a headline slot on Uncut’s stage at the Latitude Festival, and top billing – above Big Star! – at London’s Serpentine Sessions), and the group rediscovered their drive.

It felt “great and worrying and frightening and exciting again,” according to Staples. “Tindersticks now felt not like a conclusion, but like the start of something.” Of course it helps when you’re scoring films and are commissioned to create music for the Louis Vuitton summer collection in Paris, assignments unlikely to fall the way of many nervously reuniting bands any time soon.

The new phase continues with this eighth studio album (not counting four soundtracks) of their 17-year career, again recorded in France and Brussels. Yes, they keep ploughing the sullen furrow they’ve made their own: mumbling, murky ballads that surge into majesty predominate. There’s no room here for their spoken word tangents, or for the old-school soul tributes that once saw them cover Odyssey and pastiche The Chi-Lites so lovingly. Yet there is a major surprise, and it comes at once with the six-and-a-half-minute title track, which riffs on a jazz motif with much improvisation and hypnotic accumulative effect. If the backdrop isn’t a mile away from Dave Brubeck, in the foreground the players (Terry Edwards’ trumpet stars) weave in and out of each other’s lines with poise and grace. “Falling Down A Mountain” always feels as if it’s climbing, carrying you with it.

Then the soft-shuffle ballads take up residency. Tindersticks remain masters of mood-setting, making songs that are lyrically odd (“She Rode Me Down” has something of the post-coital about its sighs) or potentially twee (“Harmony Around My Table” hints at domestic bliss) resonate with a cinematographer’s sense of grandeur. The sparser, brittle “Factory Girls” swings the hardest emotional punch of all, with Staples singing, “It’s the wine that makes me sad/Not the love I never had/Or the things I’ve never seen/Or the places I’ve never been.” There’s a crafty economy to the self-pity.

Although the personnel has crept back up numerically (David Kitt joins on guitar and backing vocals), one visiting voice is a coup. “Peanuts” presents a rare sighting of Canadian chanteuse Mary Margaret O’Hara, who duets with Staples on a touching, country-tinged number so split between oddball eccentricity and quivering heartache that it’s made for her unique gifts. Devotees take note: she doesn’t just grunt a few noises She properly contributes, phrasing those falling, swooning notes as only she can.

So, no startling change of pace, direction or feel, then. Instead, what Tindersticks sound like on this subtly strong album is a band with restored self-belief, again loving doing what they do better than anyone else.


Q&A
Stuart Staples, Tindersticks
How did the hiatus help you?
It gave us a chance to redefine what we wanted from this. In 2003 we were pretty jaded as a group of people. With this album we were looking for something else; a collage of different ideas and approaches. Much of the time it felt like we were working out on a limb.

How did you come to duet with Mary Margaret O’Hara?
Actually I didn’t know so much about Mary Margaret, then met her after a concert in Toronto. I was intrigued. I was trying to get to grips with “Peanuts”, a song inspired by Fritz Lang’s Fury. The two just came together.

Does living in France influence the sound?
The work in London started to feel as though it was defined by its surroundings. Here, especially in the studio, there isn’t anything to define anything. It seems we arrived where we are now via a thousand little steps, although there has been the occasional leap.
INTERVIEW: CHRIS ROBERTS