Thurston Moore – Trees Outside The Academy 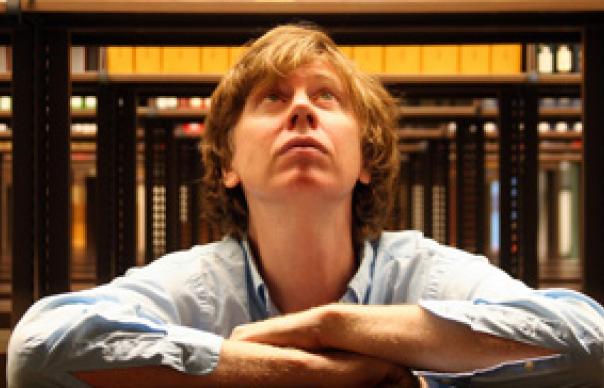 Thurston Moore completists – and yes, they do exist – have their work cut out trying to track down the ageless noisenik’s complete catalogue. If he’s not recording Sonic Youth albums, he’s running his own label, or jamming with Norwegian avant jazzers, or writing sleevenotes for Dutch free improv albums, or obsessively chronicling the history of the cassette mixtape, or studying 20th century minimalism, or… well, you get the picture.

So you’ll be pleasantly surprised to discover that his first solo album in 12 years is an orthodox acoustic pop record, recorded with Sonic Youth drummer Steve Shelley and spooky folk violinist Samara Lubelski. You’d be even more surprised to hear that it features ‘songs’ – proper, beautiful, well-crafted songs.

Having been in the vanguard of No Wave, hardcore, Riot Grrl, grunge and avant jazz over the last 30 years, Moore now finds himself in Northampton, Massachusetts at the locus of the “New Weird America” acoustic scene. Many of its leading lights are here to lend a much-needed directness to Moore’s music: the poignant “Honest James” sees him duetting with Charalambides vocalist Christina Carter over a naked acoustic guitar; “Wonderful Witches” (Moore’s most potent slice of pop punk since “Teenage Riot”) features Sunburned Hand Of The Man’s John Moloney frenetically drumming on what sounds like a laundry basket. The folksy “Fri/End”, meanwhile, could, in a not entirely dissimilar universe, be a theme tune to “The OC” and end up as Moore’s biggest hit since “Sugar Kane”.

Obviously, he can’t resist getting up to his old tricks – you’ll find some blissful tracks interrupted by shards of terrifying noise, and an eerie piano solo on “American Coffin” that sounds like Keith Jarrett playing in a toilet. The album’s final track, “Thurston@13”, is a recently unearthed home recording of a 13-year-old Moore taping himself doing silly things (“this is me throwing a nickel on the table!”) which is, effectively, what he now does for a living. Paradoxically, Trees Outside The Academy proves that Moore only truly ‘rocks’ when he ditches the amplification and goes acoustic.

*Why couldn’t you do this with Sonic Youth?
If I write something for Sonic Youth it becomes a Sonic Youth song. I can’t tell anyone else in the band what to play. I wanted to be undemocratic and dictatorial for a change.

*Why the move from electric to acoustic guitar?
I’ve always been inspired by acoustic players like Bert Jansch and Roy Harper, and wanted to do an acoustic solo record. It got a bit more expansive when I got Steve [Shelly] and violinist Samara Lubelski to complete my, er, power trio.

*Was it a conscious decision to go “pop”?
I think our last album with Jim O’Rourke – Sonic Nurse – took us as far as we could in terms of improvisation and noise. I thought it might be radical to step back and go avant pop! Everyone loves Blondie, don’t they? And if you don’t accept Blondie then you’re just a noise poseur…