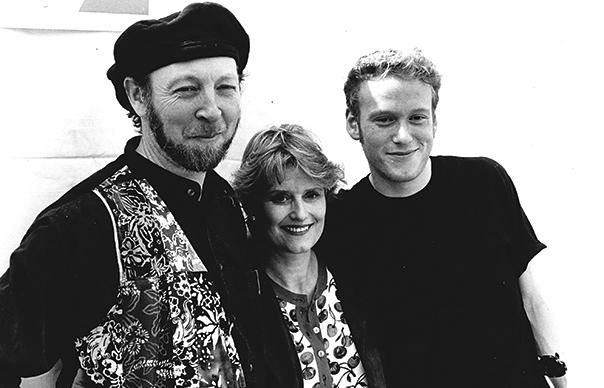 His father is “one of the greats”. His mother “has the most beautiful voice in the world”. As Teddy Thompson notes on the title track of this unconventional family album, the pressure of living up to his genetic billing has never been easy. “And I am betwixt and between,” sings the 38-year-old with brutal clarity. “Sean Lennon, you know what I mean.”

Certainly, few singer-songwriters this side of Adam Cohen, Jakob Dylan or Rufus Wainwright have had an act to follow quite like Teddy Thompson and younger sister Kami. However, the fact that their nephew Zach Hobbs – son of Richard and Linda Thompson’s older daughter, Muna – and half-brother Jack Thompson (Richard’s son by his second wife) have chosen to ply a similar trade is testament to the folksy creativity – and distinctly British-accented melancholy – that seemingly courses through their bloodline.

A patchwork quilt of songs from the various branches of the Thompson family tree, written separately but stitched together collectively, Family might easily come across as an act of calculated smugness – a showcase for the family silver. However, it ends up being a more nuanced guide to the Thompsons’ flawed but just-about functioning dynamic, divorces, remarriages and all.

Richard Thompson’s contributions are typical of the former Fairport Convention guitarist’s idiosyncratic combination of twitchy bonhomie and underlying coldness; the half-chirpy “One Life At A Time” speaks of an effort to keep emotional vampires at arm’s length (“I’m not thrilled about you,” he bumbles), while “That’s Enough” – an close relative of his own “Time To Ring Some Changes” – is a compelling slab of non-specific, us-and-them agit-prop; a fist waved defiantly at nothing in particular.

Linda Thompson, meanwhile, brings her uniquely fragile gravitas to bear on two typically mournful ballads – “Perhaps We Can Sleep” and the faux-traditional lament of a dying matriarch, “Bonny Boys”. “Dry your tears, I am at peace,” she swansings, languid yet precise, after exhorting her young to live well and marry wisely, all the action – as ever – occurring several miles below the surface of the song.

Given their forebears’ tendency to make musical molehills out of emotional mountains, it’s no great surprise that the younger Thompsons thrive on understatement too. Kami Thompson’s deceptively flyweight “Careful” is a breezy piece of Fleetwood Mac circa Rumours psychodrama – with a cheeky cut’n’shut finish from the Modern Lovers’ “Roadrunner” – while woozy closer “I Long For Lonely”, a duet with husband James Walbourne, is a tasteful nod to her family’s spiderish yearning for dark corners.

Bassist Jack Thompson, meanwhile, abandons words entirely for the moody, elastic throb of “At The Feet Of The Emperor”, while Zach Hobbs’ straight-up folk/blues “Root So Bitter” sounds not unlike something his grandma’s old Glasgow pal John Martyn might have spat out in the late 1960s, before he lost the use of his consonants.

However, it is Teddy Thompson’s title track that ultimately gives the album its stylistic and emotional heft. A Jackson C Frank-ish 3/4 strum, it succinctly expresses that combination of boundless love and who-exactly-are-you ambivalence that represents – to most functioning adults – the essence of the family dynamic. Detailing how being a Thompson has been simultaneously a privilege and a burden, the “boy with red hair and no smile” demonstrates something of his parents’ inky-black humour with an absent-minded takedown of Muna. “My elder sister is prettier than you’d believe,” he keens. “My younger sister is prettier still and can sing.” (“Believe me when I tell you that it was better this way round,” he tells Uncut. “Kami would have been far more upset. Muna can take it – I know that.”)

Hurting the ones you love the most, it seems, comes natural for any family – musical or otherwise – but the Thompsons’ essential good nature shines through stronger than any sibling niggling. Dysfunctional but somehow comforting, and ultimately you don’t need to be Sean Lennon to know how that feels.
Jim Wirth

Q&A
TEDDY THOMPSON
Why did you decide to bring the family together for this album?
I was also having some sort of miniature mid-life crisis. I was thinking about my family a lot and how I moved away from them a long time ago. In retrospect, I came up with this project to get everyone back together. I was really trying to heal some wounds for myself, but I dragged everyone along with me; ‘Come into my therapy session, whether you like it or not.’

Is there is a Thompson family musical style?
Songwriting-wise, we all have that distinctive dour outlook. And I also hear it in the voices, and the turn of phrase all the way to Zach – his guitar playing sounds so much like my dad’s, and I think Kami sounds just like my mum sometimes. I don’t know what it is but it’s there and it’s really strong.

Was it like being in the Von Trapp family growing up as a Thompson?
The polar opposite of that. My parents divorced when I was six and they never played music in the house. We weren’t the types to get round the piano and sing together. My dad just left, like a lot of fathers do, and then my mum remarried and went away on this new romance with a new husband and left us with my grandmother, Betty Pettifer. Both of my parents left in very quick succession. We didn’t have an unusual childhood but we did have a weird childhood ‘cause we were ripped apart, especially me and Kami.
INTERVIEW: JIM WIRTH