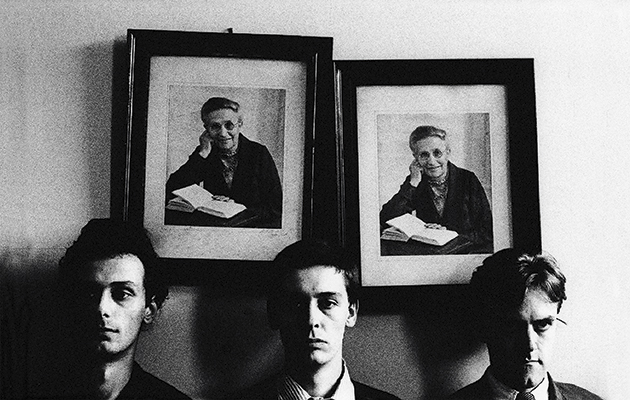 Dominant narrative tells us that post-punk came out of the fire of punk – the disruptive socio-cultural possibilities of 1976 opening the way for a more questioning, experimental programme. It’s a convenient story, but for the most part, it reads like a not-so-subtle warping of the truth. Dig into the archives of most of the truly significant post-punk groups, and you’ll find stories that wind further back, into the strange climes of the early to mid-’70s: T-Rex fanatics, Canterbury prog fall-out, jejune improvisers, Welsh folkies, this is the real stuff of post-punk’s history.

This Heat benefited from the vegetation clearing of punk and post-punk, but the trio had already earned their stripes in various ways. Drummer Charles Hayward was in Quiet Sun with Phil Manzanera (Roxy Music), Bill MacCormick (Matching Mole) and Dave Jarrett; meeting guitarist Charles Bullen via a music paper advertisement, the two started working together as a free improvising duo, Dolphin Logic, while also joining Radar Favourites, alongside Geoff Leigh (Henry Cow) and Gerry Fitzgerald. Bass player and organist, the late, great Gareth Williams, entered the fray as manager first, before joining Hayward and Bullen in Friendly Rifles.

Too much like the Sex Pistols, that name: an improvisation played along to a multi-layered field recording on cassette, made during the long hot British summer of 1976, would give the trio their lasting tattoo, This Heat. That recording would also act as an early manifestation of the trio’s practice: everything up for grabs, or as the group’s motto would have it, “All possible processes. All channels open. Twenty-four-hour alert.”

Particularly once they’d set up Cold Storage, their own studio and practice space, This Heat were always on call, less a group than a project for living, making protest music that smelted brittle poetry by channelling social angst, and the creeping dread of the beginnings of Thatcherite rule, directly onto tape. You can hear their experiment in relatively bare-bones form on their debut, self-titled album, often referred to as Blue & Yellow after the record sleeve’s stark colour scheme. Opening with the quiet buzz and whirr of “Testcard”, This Heat explodes into the barely unchecked fury of “Horizontal Hold”, where the trio’s playing cuts in and out of range with sudden, brutish leaps, the group making the most of the alchemical power of tape editing.

“Not Waving”, one of This Heat’s most dolorous songs, follows, with a distressed voice singing out from uncertain terrain, the group’s laminar improvisation moulded into a loosely plotted sea-song: imagine Robert Wyatt’s Rock Bottom re-scored for Cold War anxiety. These juxtapositions make up the bulk of This Heat: hissing, crepuscule instrumentals like “Diet Of Worms”, or “Rainforest” (recorded at their very first gig), weaving between bleak, abstract protest songs. As an album, it’s an unremitting, scorched-earth experience, which makes the following year’s Health & Efficiency 12” all the more surprising: a joyous, exultant anti-anthem, “dedicated to the sunshine”, the title track has strong claim to be This Heat’s greatest six minutes, the brief body of the song itself, strung with slack-jawed guitars, giving way to a four-minute coda where a loop unspools to a seeming eternity.

1981’s Deceit, however, is This Heat’s crowning achievement. If This Heat was process laid bare, and Health & Efficiency a constructivist intervention, Deceit is close to This Heat’s state-of-the-world address, taking in geopolitics and military strategy (in Simon Reynolds’ Rip It Up, Hayward despaired of the national security policy of Mutually Assured Destruction), painted in unsurprisingly bleak hues. On “Shrink Wrap”, they take on false consciousness in a manner similar to Scritti Politti’s “Hegemony”, calling into question common-sense understandings through tortured vocal display: “Don’t bite the hand that feeds you/You can have your cake and eat it.”

Elsewhere, This Heat inject yet more ferocity into their songs, the thoroughgoing demystification of song employed by Rock In Opposition gaining new urgency on “SPQR” and “A New Kind Of Water”, brusquely cutting from studio to rough live audio on the astonishing “Makeshift Swahili”, occasionally dialling down the intensity on gorgeous, hesitant improvisations like “Radio Prague”. But it’s the commitment and energy of Deceit that stays with you, an echo of their legendary live form: as Hayward reflects on the latter, “our whole thing, the politics, the lyrics, everything was rooted in pure sound, so that was our focus and we seized any chance to unleash the sound with unabashed enthusiasm.”

Williams had left by the time Deceit was released, and though This Heat carried on briefly with new members, the magic had gone, and they eventually disbanded. The trio would all go on to make excellent music: Hayward with Camberwell Now and Regular Music, and as a powerhouse improvisor; Bullen with Lifetones and Circadian Rhythms; and Williams with Mary Currie on the Flaming Tunes cassette. There’s something mercurial in This Heat’s slim body of released music, though, and something intangible, an X factor that constantly eludes conscious articulation. Remarkable music, indeed.

Q&A
Charles Hayward & Charles Bullen
This Heat are usually framed as a post-punk group. Did punk feel like a divisive moment?
Hayward: [This Heat] were already gigging by the time the punk thing exploded and were very curious when we read things like “No more Beatles or Rolling Stones”. Unfortunately when we heard the actual music it sounded like Chuck Berry on speed. The DIY thing was already in place, the European improv scene, Sun Ra, the German bands like Can & Faust, and most of the punk stuff just didn’t have the same commitment to sound.

What made Cold Storage such a unique place to record?
Hayward: David Cunningham [of the Flying Lizards] told us there was this disused meat fridge at the Acme Studios complex on Acre Lane, Brixton. When we went to take a look there were no lights working so we had to use torches; it had its own micro-climate in there, mist and stuff. I expected to see a pack of albino wolves.

What did Gareth bring to This Heat, and what are your fondest memories of his presence?
Bullen: Gareth was a very gentle and very funny man! Though he probably seemed to be a bit of a wild man onstage after the first year or so. He was very much into the “non-musician” thing all the way, even though by a year later he had also picked up the bass and guitar and reached a fair bit of technical proficiency on both.
INTERVIEW: JON DALE