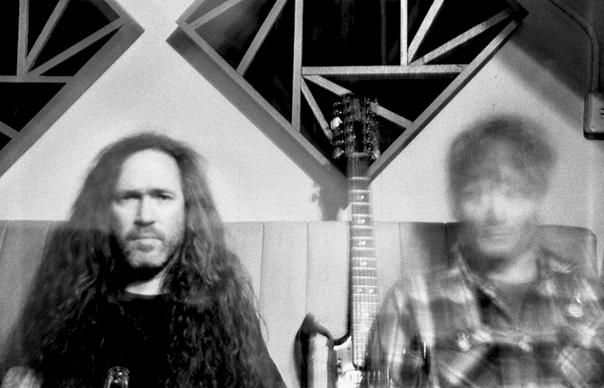 There’s always been something restless about Thee Oh Sees. It’s in the shimmering psychedelic music they have been recording since 2008’s The Master’s Bedroom Is Worth Spending A Night In. It’s in the speed with which they put out new releases, 13 in six years including lives and comps, plus numerous EPs and seven inches. It’s in the constant changes of musical emphasis, the switches between light and dark, pop and experimental, with the band’s heaviness peaking on 2013’s formidable, metal-flirting Floating Coffin.

And it’s there in spades on Drop, the first album since ringmaster John Dwyer announced he was taking a break, a widely misinterpreted “hiatus” that lasted, oh, a couple of months, while Dwyer moved to LA and effectively became a solo artist, having left the band behind in SF. This is a band that refuses to settle down.

That isn’t clear at first, when Drop sounds like a continuation of Floating Coffin, with the monstrous opening track “Penetrating Eye” playing out on an unsettling, industrial palate of wildly shrieking guitars and an evil ‘na na na na’ chorus that sounds a little like being aurally tortured by the Joker. Nothing else on the album is quite as heavy, even if it shares that discomforting atmosphere. “Encrypted Bounce” is a mite more relaxed – if sounding like Suicide can be considered thus – but even here there’s a semi-crazed Mellotron solo in the middle eight before it locks into a wicked groove. Drop was created in a Sacramento studio by Dwyer and producer/drummer Chris Woodhouse, and carries an air of synth-heavy experimentation, as the pair take a song and then beat it boldly out of shape and back again. The joy is in how much of it there is to listen to, with constant changes of tempo, instrument and texture that manage to maintain an overall coherence while keeping anybody from getting bored.

The occult, mysterious “Savage Victory” ends in a buzz of fuzz that leads to the strange delights of “Put Some Reverb On My Brother”. “I can’t see you, you can’t see me” the Lynchian lyrics repeat intensely against claustrophobic 8-bit guitars, before the song abruptly switches to blissed-out 1967 freakpop, with refreshing organ and acoustic guitar backing dreamy vocals that counter, “I can see you, you can see me”. Then the cycle repeats, going back and forth for two-and-a-half endless, spiralling, minutes.

“Drop” is a more conventional piece of guitar-led garage-pop, and Dwyer probably could have recorded a whole album like this, but it wouldn’t have been half as interesting. This is one of the few songs from the album you may hear live given that Dwyer has decided to ditch keyboards as he puts together a new touring band from LA-based musicians. Dwyer had lived in the Bay Area for 16 years, becoming a key part of the scene that spawned Ty Segall, Mikal Cronin and the Fresh & Onlys. He moved to LA for reasons of space as much as anything, but was delighted to discover he’s now neighbour to a stoned, 60-year-old drummer “who can’t hear shit”, so is free to make as much noise as he wishes.

Fittingly, “Camera” comes in thumping like a grunge “Stepping Stone” and wears well its menacing Link Wray strut, before we meet the ultra-weird “The Kings Nose”, that lulls you by beginning with a Pink Floyd-style haze until you realise every line of lyric will be met by a jolting guitar flourish, creating a stop-start effect that really pulls the rug out from under you. Once more, you don’t quite know what to expect. “Transparent World” is abuzz with feedback, before Dwyer says goodbye with the lush “The Lens”, wrapping up a lyrical fascination with the human gaze – eyes, camera, lenses are recurring themes. It’s a soothing ear bath after 30 torrid, tremendous, minutes of electrifying weirdness.
Peter Watts

Q&A
John Dwyer
Is the hiatus over?
That was a social media shitstorm and I decided to stay out of it. People’s memories are so short everything is relative. I just said I was taking a break while I moved to LA. It was a reboot of my life. I’m older, I need some elbow room. I have nothing bad to say about SF, it was just too damn full. There’s still such an amazing scene there. There’s Pow!, the Scrapers and a band with a terrible name who are so fucking good, Chad And The Meatbodies. They blew my head off, total shredders, like a psychpop Iron Maiden.

Who played on Drop?
Me and Chris [Woodhouse] worked on it together. I wrote a bunch of demos and then brought them to him. We recorded in a studio in Sacramento, an old banana-ripening warehouse. He plays drums and we switch instruments throughout. We recorded 15 songs and then cut back. Regardless of what people might think about my output, I’ve tried to be a little bit better at editing.

Have you put a new touring band together?
I’m working on a few things. I don’t know how much of this will be played live. The future of the band doesn’t hold much keyboard, I want to go more guitar. I’ll still record with a keyboard but I’m burned out with it live. I’ve been getting trapped into synthesizer land, I’m just surrounded by drum machines and keyboards while all my rock and roll stuff is in another studio. There comes a time where every guitarist discovers the keyboard.
INTERVIEW: PETER WATTS