The Yes Men Fix The World

Bashing the capitalists with comedic flair 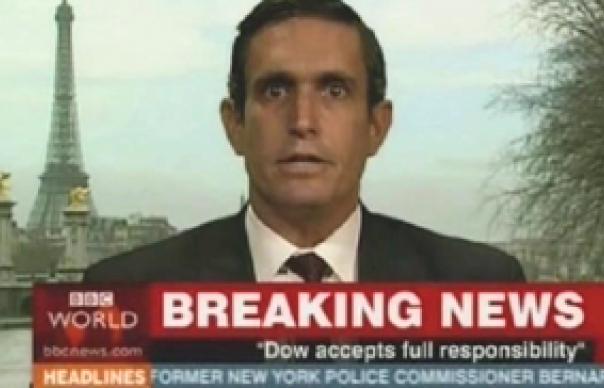 The Yes Men are a coalition of corporate responsibility activists who recognise that there are more effective – and more amusing – means of protest than chanting slogans at bored police officers. The Yes Men use websites to establish bogus identities as consultants, lecturers and commentators. Inevitably, their “services” are sought by credulous corporations and media, allowing them to wreak entertaining havoc from within.

In The Yes Men Fix The World, two of the group – Andy Bichlbaum and Mike Bonnano –blow their cover, filming their greatest coup from the inside. The target is Dow, new owners of Union Carbide, the company forever tainted by association with the world’s worst industrial disaster – the 1984 Bhopal gas leak.

The Yes Men appear on BBC Worldwide as spokesmen for Dow, promising overdue restitution to the people of Bhopal: a stunt that wipes US$2 billion off Dow’s stock value. What ensues is a smart, thoughtful examination not only of the morality of capitalism, but of comedy – the Yes Men fret over the ethics of their prankery with a rigour that their corporate adversaries could learn something from.