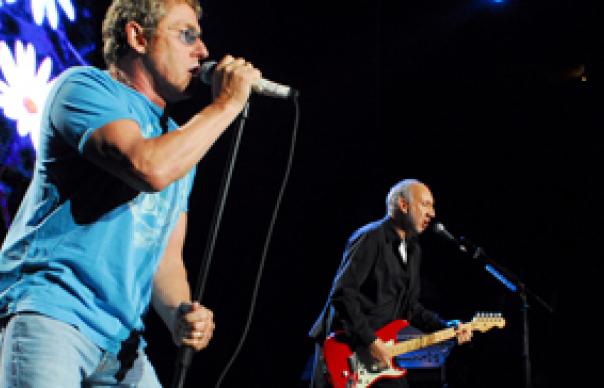 When Pete Townshend spoke to Uncut last year to promote the new Who documentary movie Amazing Journey, he spent more time inadvertently promoting a film made about the band 30 years earlier. “I still like to refer to The Kids Are Alright to remember who I used to be,” he said, a tad perversely. “[It] was made when The Who, Keith mainly, felt as though we were finished.”

If the drummer and the group thought themselves on the verge of extinction, it was not evidently a thought they allowed to affect their work. Filmed here at a Kilburn show in 1977 convened specifically to add new live colour to The Kids Are Alright, the band are observed to be battling gamely against Dr Moon’s worrying prognosis. Having struggled to get going on some better known – to be honest, just plain better – songs, here, the band hit their stride on, of all things, a John Entwistle composition, “My Wife”, the band’s primitive chemistry finally providing what we need from The Who: a satisfactorily loud explosion.

It’s one of the moments that make this set, rather against the odds, a worthwhile addition to the abundant audio-visual materials already on offer from this enduringly multi-platform band. Certainly, this is not visually exciting stuff, being in part an utterly no-frills filming of a live show (the Kilburn part) and in another a poorly lit home movie shot by the band’s then managers (the chronologically earlier, London Coliseum 1969 part). What makes it interesting is the hands-off nature of the presentation. Given that The Who’s entire career has been characterised by Pete Townshend’s urge to edit and re-edit, to explain and theorise about his work, this is remarkably unadorned. Strangely for a Townshend project, without footnotes or Extras, we are left to simply draw our own conclusions.

The result, it should be re-emphasised, is not likely to be thrilling to the neophyte. However, for the fans who have long urged for this footage to be released, the package does end up casting considerable and valuable light on how The Who went about their business.
The Coliseum footage – a partial recording of a show shot when the band took rock opera Tommy to the home of the ENO – is a neat encapsulation of this group’s schizophrenic character. For some of the show – “Substitute”, “Young Man Blues”, etc – they are the wild rock band of legend. At other times, say, their rendering of “A Quick One While He’s Away”, you wonder how such fragile conceits as these could ever have lived under one roof within such a noisy family. Those wanting such answers should be careful what they wish for, however. Here, after all, Townshend is, with several toe-curling minutes of explanation of exactly what the band are up to, complete with excruciating inter-ruptions from his drummer.

It is, of course, this drummer (even if the sound mix of that show bizarrely favours, of the four Who members, John Entwistle) who looms largest in this set. As Townshend recalled it in 2007, though he was in a terrible state when he returned from the US, the band had high hopes for the Moon’s eventual recovery in rehab, (even if Moon couldn’t see it himself) and even thought it possible that this rejuvenated figure could contribute to what would be an eventual “genuine renaissance” for The Who.
As it was, the 1977 Kilburn gig was destined to be the penultimate appearance by the drummer, the hoped-for renaissance never quite taking place. Moon, evidently, was unable to change his ways – and if that applied to his lifestyle, this proves it went double for his music. When Moon went into that good night, here there’s proof he did so very far from gently.