Heavy riffage! Mariachi blues! Meg and Jack are back 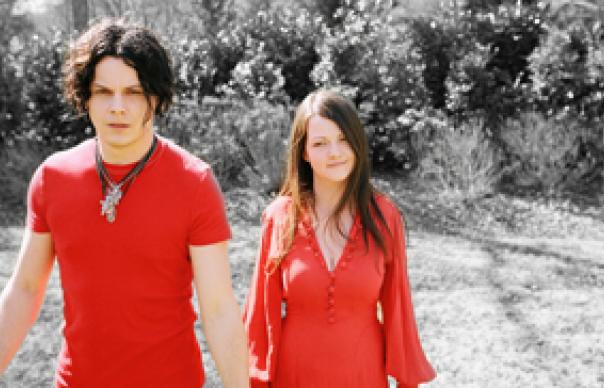 Recorded over three weeks at Nashville’s Blackbird Studio – an unaccountably lengthy process for one of rock’s most swift, efficient duos – *Icky Thump* is a strange beast indeed. By turns direct, quizzical, loose, and intense, it’s more eclectic in terms of approach than any previous White Stripes recording.

It’s named after the old Northern English expostulation Ecky Thump (meaning “Well I never!” or, more strongly, “Bugger me!”), one of the quaint Anglo idioms which appear to have reached Jack White via his English wife, Karen Elson. It might, however, have been more appropriately named after another, “Rag And Bone”, whose recycling motif better reflects the album’s varied styles and its application of old forms.
“Rag And Bone”, the song, is a comic rendering of the album’s method.

Here Mexican mariachi and Celtic folk lie alongside the band’s basic blues-rock riffs, while Jack yells out the band’s creation manifesto: “Bring out your junk and we’ll give it a home/A broken trumpet or a telephone”.
Not that Icky Thump is the first White Stripes album to reap the benefits of ad-hoc music making, of course. (i)Get Behind Me Satan(i) was remarkable for it’s use of piano and marimba – the materials which happened to be at hand in the studio. This time there’s nothing quite so left-field. Having set to work on this album after finishing touring his other concern, pop-rock band The Raconteurs, guitars are front and centre in this release.

Not only that, they are recorded such a way as to suggest this is a band looking to compete. Now on signed to Warner Bros in America, this features songs of a directness not seen since their eponymous 1999 debut – and ones which it’s not hard to imagine doing well in stadiums. So for all its moments of inspired juxtaposition, much of this album sounds like Led Zeppelin in a particularly crazed mood. The brutal drums and bass of tracks like “Catch Hell Blues”, “300MPH Torrential Outpour Blues” and the title track are periodically interrupted by lead guitar of such piercing fury that it’s almost as if the songs themselves are bursting apart at the seams.

As well they might, when lyrically-speaking, Jack’s either in a schizoid quandary – “Well, there’s three people in the mirror/And I’m wondering which of them I should choose” – or just looking for trouble. “If you’re trying to get into some hot water,” he intones, in “Catch Hell Blues”, “I can help you find it”.

The addition of organ and synthesiser to the band’s instrumental palette pushes the music in new and unforeseen directions. With its driving organ riff punctuated by heavy fuzz-guitar interjections, and Jack working at the upper limit of his register, “I’m Slowly Turning Into You” sounds like Led Zeppelin jamming with Atomic Rooster, than which there can be few heavier combinations. One of several ruminations here upon emotional change and development, it finds the singer slowly coming to the realisation that he’s been unconsciously imitating “all those little things that you do”, and that, moreover, he actually prefers this new, imitative self to his own character.

Sometimes, the change is neither forced nor welcomed, but arrives as a slowly dawning realisation, as in “A Martyr For My Love For You”, in which Jack finds himself feeling uncomfortable and ashamed for lusting after a teenage girl: “…as shaky as I must’ve seemed/Talking junk through her/Giggle little teenage dream”. In a sudden burst of self-denial, he decides to protect her from his darker side by just walking away, ignoring her claims of cowardice to bask in his new-found nobility. A song not likely to be covered by Motley Crue, one would imagine.

Of course, the band’s broader blues heritage is an important constituent of *Icky Thump*. It’s there most clearly in the no-money blues “Bone Broke”, and particularly “Effect And Cause”, the ramshackle steel-appendage guitar blues which closes the album – wherein Jack, whilst admitting he’s no angel, turns the tables on his complaining partner, rejecting her habit of getting annoyed at his reaction to her transgressions, rather than accepting the blame herself.

But ultimately the album’s blues undertow is lightened by the more unusual tracks, like Corky Robbins’s “Conquest”, a dramatic *norteño* blues spiced with mariachi trumpets, whose role-reversal-romance lyric Jack attacks with the theatrical gusto of a matador addressing the bull. Meanwhile, the album’s two-track centrepiece of “Prickly Thorn, But Sweetly Worn” and “St Andrew” – a pair of faux-Celtic folk pastiches featuring the bagpipe drones of Jim Drury alomgside Jack’s mandolin – pay tribute to the Whites’ professed “Scottish ancestry”.

The album’s definitive cut, however, is the title track, a reflection upon America’s problematic relations with immigrants, particularly the Mexican immigrants upon whose underpaid exertions it relies. “Who’s using who? What should we do?” asks Jack, “Well, you can’t be a pimp and a prostitute too.”

Sonically, it features everything that makes *Icky Thump* such a compellingly weird experience, including one of the album’s plethora of guitar solos (more than on any previous White Stripes record) and, it’s claimed, the very same waspish-sounding keyboard used on The Tornadoes’ epochal “Telstar”. A small point, seemingly, but a significant one. With “Icky Thump”, Jack and Meg’s music again makes them a rarefied perch from which they can gaze both back into rock’s past, and forward into its future.