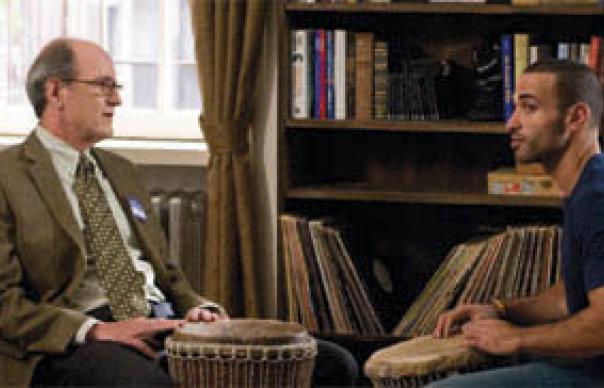 You might not know the name, but, unless you’ve avoided American movies and TV for the past 25 years, you will almost certainly recognise Richard Jenkins, a character actor par excellence who’s supplied uptight lawmen, crumbling husbands, distracted doctors and distant fathers in everything from There’s Something About Mary to Six Feet Under.

The first great joy of Thomas McCarthy’s movie is that, after a career spent providing pitch-perfect support, it finally gives Jenkins, at 61, the lead, and he responds in a manner beyond most of the stars he has helped prop up.

He plays Walter Vale, a lonely economics professor at a leafy Connecticut college. A widower, he has retreated from life, erecting the excuse of his work as a wall between himself and the world; but when work forces him back to New York City and the empty apartment he and his wife used to share, the world presents a surprise: a young couple living in his home, immigrants – Tarek (Sleiman), from Syria, and his Senegalese girlfriend, Zainab – conned into renting the place.

Walter’s wife was a pianist, and love of music remains his one tenuous lifeline. As it happens, Tarek is a musician, too, a drummer, and the two gradually hit it off, forming an odd couple as the fascinated Walter takes lessons from the younger man. Just as their friendship is cemented, however, disaster: Tarek, an illegal, is arrested and faced with deportation.

A familiar actor himself, it’s perhaps no surprise that McCarthy elicits uniformly exquisite performances, but he’s emerging as a writer-director of singular vision. As with his previous film, The Station Agent, here is a quiet comedy about healing, but the stakes have been upped.

Set against post-9/11 Manhattan, it casts Jenkins as a man learning to loosen up and open up in a world intent on shutting itself off and shutting itself down. McCarthy is hardly subtle: his plot is basically “white American sees black Muslims are people, too”, yet he handles a strident subject in a gentle way. This is a modest miracle of a movie – and, in Jenkins, you won’t see a more perfectly modulated performance this year.
DAMIEN LOVE