Stormy, heavenly and hymnal – it’s like they’ve never been away 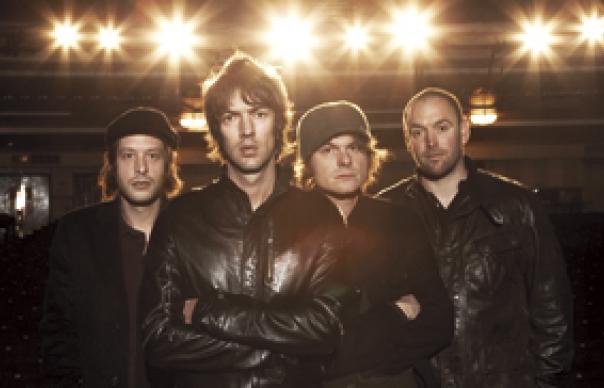 Some bands will attempt to schedule their album release for the time of year that best reflects the mood of the music contained therein: Halloween, say, or summer’s first golden murmurs. Others will have their release dates held back or rushed forward for more cynical reasons by record companies attempting to capitalise on the perky pre-Christmas market or to balance their books for the financial year.

The release of The Verve’s comeback album, on the other hand, has been deliberately scheduled to coincide with the start of the football season. According to a Parlophone marketing wonk quoted in Music Week, the timing is all part of their campaign to target “the 25- to 44-year-old male-biased market with a strong Northern regionality.”

This news is dispiriting. Football crowds, en masse, aren’t noted for their subtle musical discernment, as their ready adoption of such progressive works as DJ Otzi’s “Hey Baby” and The Fratellis’ “Chelsea Dagger” have shown. The Verve have always played on the tension between their laddish tendencies and their explorative impulses – the dominance of the former is, you suspect, why Nick McCabe split up the band, twice – but Parlophone’s strategy appears to betray the fact that, on Forth the blokeish anthems have won out.

Thankfully, that isn’t the case. Lead-off single “Love Is Noise” is as direct as Forth gets, and it is propelled by an insistent, high-frequency alien siren, surely McCabe’s doing. On the recorded version, this metallic wail is muted for radio palatability, compared to when The Verve unveiled the song at the awesome climax to their Glastonbury headline set, when it threatened to consume the entire valley. But as with “Bitter Sweet Symphony”, “Love Is Noise” achieves a transcendence that is greater than the sum of the band’s parts: the vivid, mesmeric swirl of the music lends Richard Ashcroft’s vocals a cool authority and allows the lines he’s borrowed and butchered from “Jerusalem” (“Will those feet in modern times/ Walk on soles that are made in China?”) to seem profound, rather than the meaningless twaddle they probably are – a classic Verve trick.

The febrile “Thaw Sessions” jam that circulated as an MP3 last year raised hopes that The Verve were back to their strange, soupy, psychedelic best. If there’s nothing quite as thrillingly loose here – Ashcroft has wrested control again, and rather than float with the undulating tide of the music, he feels compelled to direct and contain it – then at least McCabe is allowed to take over the running of the show as each track edges closer towards the seven-minute mark.

There are unexpected echoes of a pre-definite article Verve on Forth: the featherlight ripples of “Judas” bring to mind early single “She’s A Superstar”; “Columbo” is a distant cousin of “Man Called Sun”, toughened up with a spy-theme bassline and tugged in an unexpected direction by a tempo change midway through; and “Valium Skies” also boasts the kind of quicksilver chord changes and scrupulously-layered shimmers that The Verve seemed to forget about once they’d fallen under Oasis’s spell and confused making big music with courting big audiences.

The compromise that the band sometimes have to find between Ashcroft’s song structures and McCabe’s propensity to meander leaves “I See Houses” and “Appalachian Springs” sounding a little torpid, like Urban Hymns’ bloatier back end. However, even when The Verve plod, there are swoops, whirrs and inspired, slithering counterpoints that keep you transfixed.

They’ve ventured new ideas too. “Noise Epic”, although suggesting The Verve have run out of song titles, finds Simon Jones and Pete Salisbury working up a motorik groove, McCabe dousing it with static, and Ashcroft alternately whispering and raving over the top. It’s very Primal Scream, and dives impressively into a screechy, Stooges/XTRMNTR-style coda, with Ashcroft hollering “I got spirit!” and announcing “I don’t just use my fists/ Yeah, I use my feet” like an excitable kickboxer – notes of the old Mad Richard. Elsewhere his voice is serene and majestic, occasionally slipping into a sweet, soulful falsetto, and arguably sounding better than ever.

In an age when most British guitar bands strive to sound dry and down-to-earth, The Verve’s relentless quest for epic-ness and indifference to ridicule is welcome back. Forth certainly makes it seem like they’ve never been away, the stench of those woeful Ashcroft solo albums extinguished. Older fans hoping for an unfettered psychedelic voyage may not be completely satisfied with the way McCabe is largely made subservient to the songs, but the targeted football terrace casuals are certainly going to get more than they bargained for.