The Traveling Wilburys – Volumes 1 And 3 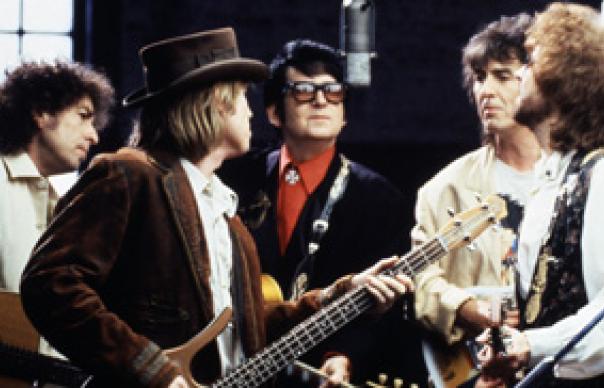 If it had taken place during the 1970s, the teaming of Bob Dylan, George Harrison, Roy Orbison, Tom Petty and ELO mastermind Jeff Lynne would have towered over supergroups like Blind Faith and Crosby, Stills, Nash & Young. But in 1988, when Traveling Wilburys, Vol. 1 appeared, Dylan was perceived as being in decline, Harrison was far removed from his post-Beatles landmark All Things Must Pass, Orbison was ancient history to most fans and Petty had yet to release the career-revitalizing Full Moon Fever. On top of that, the assembled legends deliberately downplayed the whole thing, adopting tongue-in-cheek fake names and subsuming their instantly recognizable styles into the leveling context of Lynne’s production.

The formation of the Wilburys was practically an afterthought. Lynne had just finished producing Cloud Nine for Harrison, and Warner Bros. Records asked them to come up with a B-side for the first single. Corraling their friends Petty, Dylan and Orbison, they came up with “Handle With Care,” featuring the swapping of lead vocals from one indelible voice to the next throughout the song, topped off by a rousing blend of those voices in the refrains. This sublime side brought the Traveling Wilburys to life.

Recorded in L.A. in just 10 days, the supremely accomplished Volume 1 now seems like a boxful of revelations. Dylan submits to the novelty of placing his unruly voice amid Lynne’s scrupulous, glossy production on “Dirty World,” “Congratulations” and the captivating “Tweeter and the Monkey Man”. Orbison absolutely blows the roof off what would be his last rock aria, “Not Alone Any More”. Petty’s “Last Night,” suffused with bonhomie, and the synth-meets-horns production number “Margarita” exemplify the extremes of his longstanding partnership with Lynne. And the reinvigorated Harrison’s “End of the Line” returns him to the form of his early solo work, while coming off as both more poignant and more life-affirming in retrospect.

Orbison died before the rest reconvened for the facetiously titled Vol. 3, and, not surprisingly, it’s a less spirited affair, with uniformly solid performance but only occasionally inspired material, the standout being Dylan’s lilting “If You Belonged To Me,” on which he updates his Blood On The Tracks style, and Petty’s “You Took My Breath Away,” a grand homage to their fallen comrade. But those voices and presences transcend any limitations, making the Wilburys one of rock’s most disarming aberrations.