The Thick Of It – Series One 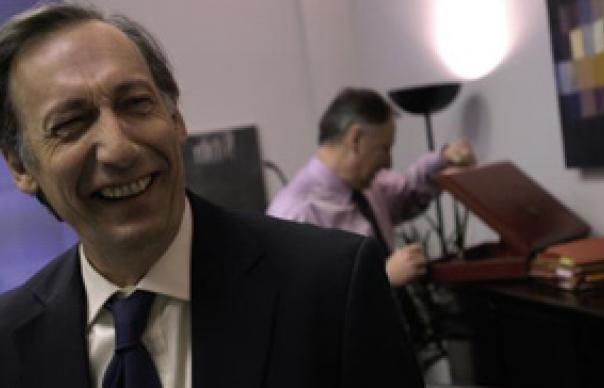 “The Thick Of It” turns on its head something we were all told when we were young – at times this is a programme that seems specifically designed to prove that swearing isn’t just big, it’s also very clever.
In this first series of Armando Iannucci’s political comedy, it’s also nearly impossible to escape. Here the show’s cast of beleaguered politicos are not left holding the baby, they’re left to “mop up a hurricane of piss”. They’re not being overruled by a colleague, so much as they are “fisted up to the gall bladder by a bald man”. It’s hilarious, occasionally terrifying stuff, and it gives additional momentum, to what is undoubtedly, the fastest paced, most highly satirical, not to mention funniest British political show of recent years.

Based in the newly-created Department of Social Affairs, “The Thick Of It” is essentially the tale of one minister’s fight to keep his head above water in a fast-paced political environment. Anxious to remain visible, but troubled by the notion that his “lack of click” with the Prime Minister’s wife may halt his rise through the ranks, Hugh Abbot (Chris Langham) has to run a department that’s essentially the dumping ground for poorly-conceived policies from other departments.

In his constant fight to remain on message he’s aided by civil servants Glen, Ollie and Terri, but he still remains under the constant threat of verbal assault from the Prime Minister’s enforcer, Malcolm Tucker (Peter Capaldi). “I don’t know what’s worse,” says Abbott of Tucker. “Seeing him rumble towards you, like prostate cancer. Or have him suddenly surprise you, like a stroke.”

It’s this element of the unpredictable, and the immoderate that gives “The Thick Of It” much of its edge. Though it’s traditionally a week that’s a long time in politics, spending even a half an hour watching the proceedings here can feel pretty nerve-racking – as the team’s efforts fail to live up to Tucker’s high standards, we live in a delighted kind of dread of his next foul-mouthed explosion. There have been political comedies before, of course, but Ianucci’s show strips away the smugness, and adds a wobbly mockumentary naturalism to proceedings, and as such a discernible air of panic becomes the x-factor in this occasionally farcical world.

In the Department of Social Affairs, this panic will often lead to the creation of policies “on the hoof”. This ad hoc, improvisational atmosphere isn’t just “The Thick Of it”‘s subject – it’s analogous to the show’s creation. Initially given a budget for a single pilot show, Ianucci reasoned that if it they were shot quicky enough, there would actually be enough money for three programmes. There are also plenty of occasions where the cast simply improvise – and this similarity between TV and political life is a relationship the show clearly relishes. In one episode, Malcolm berates a minister for “not knowing the lines”. It’s hard not to recall how in a recent documentary, Clare Short praised Tony Blair, though primarily as an actor.

What’s most impressive about this show is how lightly all its satire is worn. Contained within the six episodes here are comments on how the news is made and then repressed, funding for hospitals, how bureaucracy holds up government, and how focus groups can help pin down a target individual that doesn’t actually exist. So well is it all done, however, that one never feels even slightly hectored. What you remember are the jokes and the story, which as a TV news editor in one episode points out, is an old one, and a good one: “It’s called ‘Minister looks a tit’.”

Q&A – Armando Iannucci
UNCUT: Did you have any ideas who you wanted to play these roles?
IANNUCCI: Chris Langham I had in mind for the role of the minister, because I’d seen him as George Orwell, and he was very good. I didn’t have anyone in mind for Malcolm, but the casting director said “You (i)have(i) to see Peter Capaldi.” He said he normally plays kindly barristers, but we improvised this scenario and he was horrific, so instantly I knew. Since then he’s been given jobs as mass murderers.

Could you tell me about your “swearing consultant”?
That’s not his only job, but he’s sort of become that. He’s a guy called Ian Martin. It’s become traditional that when we’ve sort of finalised the script, which he contributes to anyway, I send it to him in Lancaster and he sends it back and it’s got all this baroque swearing in it. “Hurricane of piss” and all that – that’s Ian, so he’s become known as our swearing consultant.

Did you think the show was going to be full of laughs? Or was your intention more satirical?
I wanted to do something that felt very real and was shot very quickly, and wasn’t big budget, that didn’t look like a glossy drama, that had jump cuts. Something that didn’t pay attention to the sheen of TV drama. And somewhere in all that, we bury the standard comedy/farce structure. We take two unrelated stories and see if we can make one affect the other.