The Specials – Too Much, Too Young 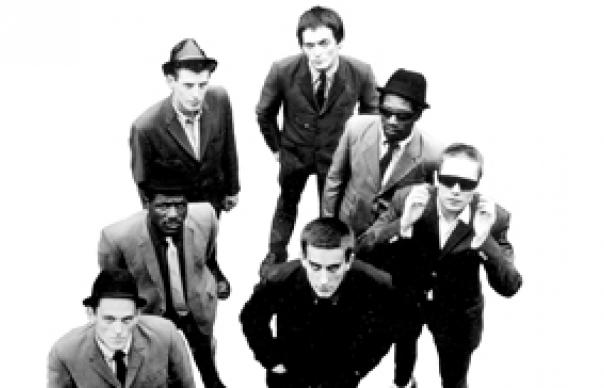 By 1979, with punk’s prime movers having either imploded (Sex Pistols) or gone west (The Clash), the prevailing gloom was fuelled by the arrival of one Margaret Hilda Thatcher in Downing Street. A creative ice age was on the horizon, and, for the nation’s teenagers, those grim prophecies of “No Future” appeared to be coming true. Until, that is, the arrival of The Specials.

Narrated by long-term fan and Soccer AM presenter Tim Lovejoy, this enthralling seventy minute documentary reminds us of 2-Tone’s intention to unite warring playground factions of punks, skinheads and mods under one monochrome banner.

Told via grainy super 8 footage, band videos and, by the looks of it, some hastily prepared photo montages, we hear the tale of the band’s rise from the ashes of The Coventry Automatics to national phenomenon in double quick time. So we discover Mick Jagger was eager to sign the band to Rolling Stones Records, how 2-Tone reflected both the label’s “racial diversity and the favoured shades of attire” and witness the band skanking their way through Dandy Livingstone’s “A Message To You Rudy” before debut single “Gangsters” even gets a mention.

Discussion of their constant run-ins with racist thugs – culminating in guitarist Lynval Golding being hospitalised with multiple stab wounds – comes with a random collection of skinhead images, including Tim Roth in Made In Britain and, rather oddly, This Is England’s Thomas Turgoose.

None of which detracts from the thrill of seeing the band in full flight. Lean, wiry, and decked out in a blur of tonik suits, pork pie hats and chequer-board accessories (say hello, Walt Jabsco!), Too Much, Too Young captures the band delivering arguably the most socially aware string of singles in British pop history. Tackling teen pregnancy (“Too Much Too Young”) the failing school system (“Rat Race”) and the debilitating effects of unemployment (“Do Nothing”) without a hint of moralistic fervour, The Specials were unlike anything before them, an uneasy alliance – inter band relations were always tense – who channelled post-punk anger with a razor-sharp wardrobe and a wicked sense of humour.

Seeing the band perform “Do Nothing” on TOTP in December 1980 dressed in matching Christmas jumpers – Terry Hall had originally suggested balaclavas – says more about the “Fuck art, let’s dance” spirit of the times than Dick Hebdige ever could. The country was in a mess, clearly, but The Specials weren’t about to lose their sense of fun over it (eagle eyed viewers will also spot David Steele from The Beat moonlighting on bass, in an impromptu show of 2-Tone camaraderie).
If 1981’s prophetic anti-Thatcher swansong “Ghost Town” provided the perfect soundtrack to such dismal times – it’s release was shortly followed by the Brixton Riots – it also marked the death knell for the band, with Hall, Golding and singer Neville Staple leaving shortly afterwards to form Fun Boy Three.

There are, it has to be said, major grumbles. Their US breakthrough appearance on Saturday Night Live is absent, presumably for licensing reasons, while the split – sparked by the sacking of manager Rick Rodgers by Dammers on tour in Toronto – is glossed over almost entirely.
Disappointingly, too, there’s not a single interview with a band member to provide some much-needed perspective, and the factual inaccuracies (“Ghost Town” is credited as their first UK number one) are shoddy. Fascinating, rarely seen videos of The Special AKA’s singles output, meanwhile, illustrate Dammers’ noble attempts to keep the flame burning, though there’s something faintly disturbing about the video for “Housebound”, that finds him sitting on the lavatory staring blankly into the distance.

Most intriguing of all is The Specials apparent lack of influence on future generations. Put it down to their indivisible links to the socio-political climate of the early Eighties, their idiosyncratic influences – everything from punk to bluebeat to lift muzak – or just today’s increasingly factionalised indie scene, but, barring the obvious exceptions (Tricky, Massive Attack, Blur’s Think Tank) elements of their brooding, multi-racial mash up in the music of subsequent generations are few and far between.
But, ultimately, none of this matters. With rumours of the band’s reformation in the air, Too Much Too Young will whet the appetite for fans prior to – hopefully – the deluge of Specials-related activity to come.
How we could do with an equivalent today.