THE SECRET IN THEIR EYES 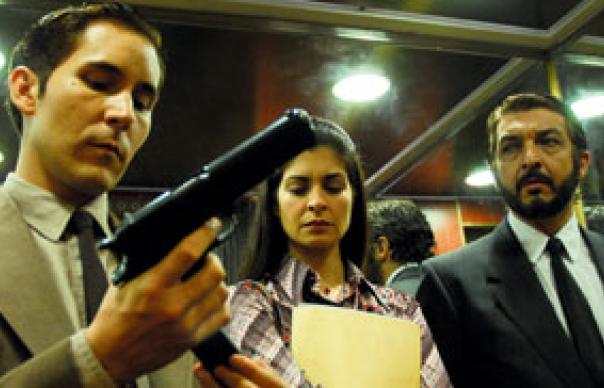 The Secret In Their Eyes won this year’s Oscar for Best Foreign Language Film – and that can be cause for suspicion. The prize is sometimes considered the safe option for conservative Academy voters when there’s tougher material in the running. Could Juan José Campanella’s genre piece – a very approachable thriller with a touch of middle-aged romance – really be worthy of beating heavyweight contenders The Prophet and The White Ribbon? Certainly, the Jacques Audiard and Michael Haneke films come across as the equivalent of hefty literary novels, where Campanella’s is more an upmarket genre beach read.

This ingenious police-procedural drama is elegantly crafted and more than watchable: it’s also a finely observed character study that, in its second hour, proves more politically charged than you might at first expect.

The story starts in Buenos Aires in 2000, where retired court investigator Benjamin (Ricardo Darín, likeably careworn) returns to his old office to see Irene (Soledad Villamil), a judge he hasn’t seen for decades. Benjamin can’t stop thinking about a rape and murder case they worked on in 1974. He has turned the episode into a novel, and would like Irene’s opinion, but all the evidence – in the two lawyers’ eyes, as the title says – suggests that what has inspired Benjamin is not the rape and murder, but the unresolved romantic tension between the duo.

Flashback to the much younger pair investigating an obsessive admirer of the dead woman. The suspect is tracked down, in an elaborately choreographed chase around a football stadium, the dazzling centrepiece of an otherwise quiet, largely interior-bound piece. Then Argentinian history itself plays a hand and we realise that, even in an ostensibly straight genre exercise, the horrors of the dictatorship years aren’t easily forgotten.

The drama leads – a touch laboriously in its final stretch – to a grim exposition of the way that private justice works itself out in the wake of political trauma. Meanwhile, the film is held together by the warm, somewhat spiky interaction of Darín and Villamil, seen at two different ages (the make-up, especially when making Darín a younger man, requires a leap of faith). One of Latin America’s few internationally recognised stars, Darín – best known here for con-game thriller Nine Queens – faintly recalls Al Pacino with a quizzical, impish streak, and he’s on arresting form here, perfectly matched by the razor-sharp Villamil.

Much of the film’s pleasure lies in this old-fashioned slow-burning romance between two maturely attractive, somewhat cerebral characters. The Secret In Their Eyes is one of those more-than-solid middle-brow foreign-language thrillers, like Tell No-One, that manage to combine genre thrills and upmarket mainstream pleasures to satisfying, if hardly ground-breaking effect.