The Rolling Stones – The Biggest Bang

The tour to end them all explodes over four discs 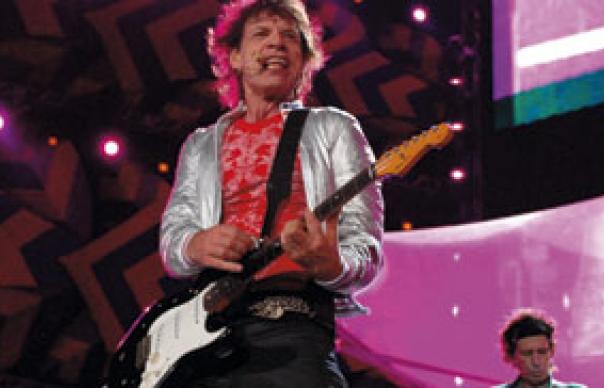 “What,” Martin Scorsese wondered rhetorically when discussing his forthcoming Rolling Stones concert film with Uncut last month, “am I going to bring to *that*?”

Faced with the sheer enormity of the Stones’ 2006-2007 tour, its six-storey stage set spewing fire like Hell’s own multi-storey parking lot, Scorsese opted to get intimate for his upcoming movie ‘[Shine a Light’, shooting the band on as small a stage as he could find instead. What this 4-disc set attempts to capture, though, is the very *that* he was talking about: the spectacle of A Bigger Bang, the biggest rock’n’roll tour in history, as the Stones go sashaying their imperious way across the planet, leaving unimaginable carbon footprints behind.

Given how unchanging their setlists can be, it’s a deftly assembled box, with Discs 1 and 2 devoted to two of the tour’s most distinctive shows. We open in Austin, Texas, in October 2006 to find the Stones at their most relaxed, departing from the blueprint for extremely unexpected, Texas-friendly covers: Jagger rediscovering his “Dead Flowers” twang for Waylon Jennings’ “Bob Wills is Still the King”; Richards demonstrating his band remain Buddy Holly fans with a characteristically smoky “Learning the Game.” More thrillingly, though, the spirit of adventure extends to them dusting off incomprehensibly neglected gems from their own catalogue, unveiling a truly epic “Sway,” Ron Wood’s razor-wire-and-knuckle-duster slide solo practically scorching the stage.

Disc 2 hops a continent, to Brazil and the epochal free gig on Rio’s Copacabana Beach in February 2006 – the night the Stones played to an estimated two million. The DVD is sequenced with the option of playing the pre-gig documentary included among the extras as prelude, and doing so adds another dimension of drama. Watching as the Stones’ crew rolls into town days in advance to begin construction like an army of Egyptian labourers, the insane scale of the undertaking grows increasingly apparent. By showtime on the night – the band walking to the stage via a specially-built bridge from their hotel, grinning with the kind of excitement you might have thought they could no longer feel – the energy crackles in the steaming air.

The sense of some vast, timeless, ritual is incredible. As searchlights beam out across the crowd, the endless sea of people dwarfs the real sea, lapping darkly by their side, with yet more people looking on from the decks of the bobbing flotilla of boats moored out there to catch the show. At the apex of it all, the Stones pull out a leviathan performance, unleashing definitive readings of “Miss You” and “Midnight Rambler”. It’s hard to say if you’re watching 2006 or 1978. Disc 3 casually hoovers up the rest of the world, offering selected highlights from Japan, an out-of control Argentina, and China, while Disc 4 is given over to a documentary laying out the whole the tour, from initial, stripped-down rehearsals through to the final night of the first leg, 116 shows later.

It’s a suitably monumental set, but there are flaws. While both concerts are billed as “full-length,” three of the songs performed from Austin and four from Rio are actually, inexplicably and needlessly omitted. The most desperately missed is a storming “Bitch” from the Austin show. Given the seven hours of footage that is included, that might seem a minor quibble, but it’s hugely irritating not to have the complete performances documented. The really bad news for Stones fans who already shelled out for 2003’s *Four Flicks* box, though, is that this is a must-have. Just remember to leave a Scorsese-sized gap on your shelf…