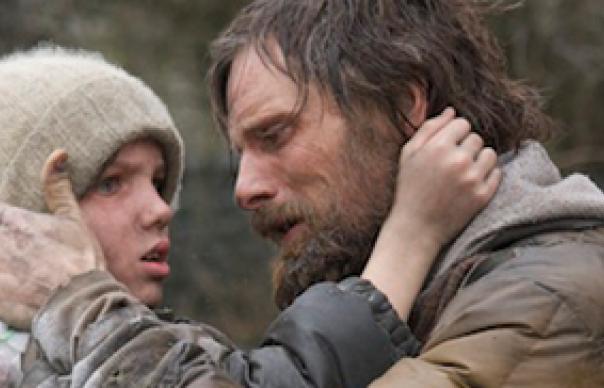 You’ve seen “post-apocalyptic landscapes” in movies before, but none so convincingly barren, dark and cold as this. The air hangs with ash, cinders, smoke: you can feel the temperature, the survivors’ despair and fear. And it’s through this uncompromising bleakness that The Road earns its grace note of redemption, ultimately sings its small hymn to the human spirit and admits a tiny chink of hope.

It’s a simple story, an almost Biblical parable. An unnamed man and his young son walk on through the devastated roads of a destroyed America, which has been wiped out by a mysterious (to us) catastrophe. They have one gun, the rags on their backs, whatever scraps of food they can scavenge, and each other. They pass burned corpses, rifled buildings. They believe they are the “good guys”. “Bad guys” might lurk around every corner, some of them hunting in packs, more than prepared to resort to cannibalism to continue existing. The boy has no choice but to trust his father’s decisions. The father, refusing to give in to sickness and pain, knows only that he must keep himself alive to protect the boy. He insists they keep moving, towards the coast. “Is it blue?” asks the boy. “The sea?” says the man. “I don’t know. It used to be.” Everything they and we see here is brown, grey, drained, jaundiced. Theirs is an essential yet futile mission straight out of Beckett, informed by Tarkovsky’s “Stalker”. It can’t end happily, but it can end strongly.

The performances by Viggo Mortensen (heroic) and Kodi Smit-McPhee are acutely credible, with the boy avoiding all the pitfalls of child actors. Along the road they meet a weathered Robert Duvall, who in 10 minutes offers his most affecting work in years. (Guy Pearce also cameos). In poetic flashbacks, Mortensen recalls the boy’s mother (Charlize Theron): these are the only scenes extended beyond the book’s minimalism and understatement, perhaps because the producers wanted a female lead and an extra star name. If they’re the only suspect note, they’re still very finely played.

It must have been tempting to make The Road a big noisy Mad Max-style blast of sturm und drang, a 2012 for people who read books, but Hillcoat, having shown in The Proposition that he can merge character and landscape, has paid the best kind of quiet tribute to McCarthy’s achievements here. He again uses a Nick Cave and Warren Ellis score subtly. If fans of No Country For Old Men may find the film insufficiently quirky (do not expect humour, not even the darkest kind), the decimated world created is wholly compelling and a submersive experience.