The Rise And Fall Of The Clash

...but mostly, the fall. An awkward, insightful account of how it all went sour for Strummer & Co... 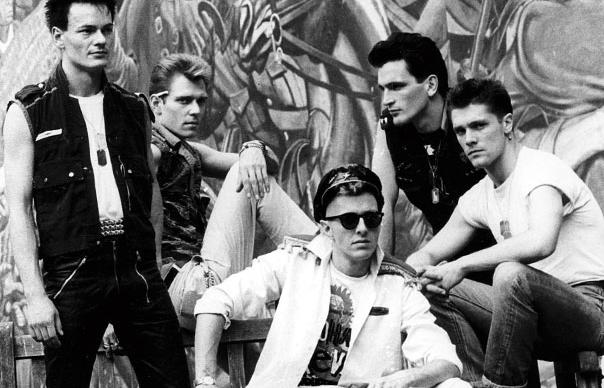 …but mostly, the fall. An awkward, insightful account of how it all went sour for Strummer & Co…

We don’t need another Clash documentary. There will never be a better profile than Don Letts’s superb Westway To The World. The story has been told and retold to death. All the same, every year some new Clash cash-in pops up. Here’s another. Miraculously, it turns out to be vital.

The first directing effort by Spanish Clash fan Danny Garcia, The Rise And Fall… scores because it’s about the messy, inconvenient part of the story Letts’s great film shies away from. Specifically: the end. And, more specifically, after the end, when that other Clash thing staggered on zombielike for a while, releasing Cut The Crap, the awful 1985 album which, true to stubbornly contradictory form, contained the last great Clash song, “This Is England”.

Garcia’s film is no great shakes as a cinematic experience. Mostly, it’s meat-and-potatoes rock doc stuff, low-budget talking heads interviews, interspersed with archive footage. It should also be noted it is no place for your Clash neophyte to begin. Those unacquainted with names like Kosmo Vinyl, or unfamiliar with the elusive ways of Svengali-like manager Bernie Rhodes, may find it heavy going.

For those who know, though, Garcia’s film overcomes its rudimentary style because the substance becomes so involving. He begins in 1981, with Rhodes being begged to return to manage the band he’d helped create, having been sacked in 1978.

In his absence, The Clash had recorded arguably their greatest album, London Calling, and their most ambitious, Sandinista. With America beginning to break, they stood poised to become one of the world’s biggest groups – but they also, it’s claimed, were half-a-million dollars in debt. The pressing issue became how to make money, while still talking the radical talk.

The new Rhodesian era began in triumph, with the fabled Bonds residency in New York, but soon fell apart, first with the sacking of Topper Headon, then, as the group tried to reconcile their espoused beliefs with the realities of playing Shea Stadium alongside The Who, the notorious ousting of Mick Jones, for “rock star tendencies.”

This is well-worn territory, but Garcia teases life from it, focussing on the band’s inner split: Joe and Paul Simonon in a Bernie-led Stalinist bootcamp on one side; Mick on the other, in a huff. Of the surviving members of the classic line-up, only Jones agreed to be interviewed, and, while funny, careful and gentlemanly, he gives away something of the bad moods and division. Not to mention his balking at Rhodes’s plan for them to start playing “New Orleans music.”

Rhodes refused to participate, but he can be heard in enigmatic audio clips, and his presence is everywhere, as contributors debate whether he is a maverick pop Situationist genius, or, as Clash security man Ray Jordan suggests, “an asshole.”

It’s the second half that becomes compulsive, as Garcia builds a sobering, nightmarish picture of life in the post-Jones The Clash Mk II, through the weary, vivid testimony of drummer Pete Howard and Nick Shepherd and Vince White, the hapless guitarists drafted to fill Mick’s shoes. We learn details of Rhodes’s heavy manners management, and Strummer’s curious willingness to go along with it, despite rising despair about where it was going.

While public bollocks were spouted about getting “back to basics” and the new band being all for one, White recalls the new members being treated by “The Clash machine” as hired help, there to “sweep the floors,” and handed weekly wages of £150. As rhetoric and hypocrisy flew about their heads, and Rhodes issued diktats on approved rebel rock attire (“A checked shirt, what do you think this is, Big fucking Country?”), Howard recalls how he and White secretly shared the love that dared not speak its name in Clashland, by both being fans of Yes.

How did it happen? Ever-insightful Strummer biographer Chris Salewicz points to Joe being in crisis – his father had died, his mother was dying – and clinging to Rhodes’s manifestos and manipulations as the pressure of his own legend mounted, hoping against hope it was the right thing. “Joe was naive,” Salewicz sums up, nailing a simple truth often unrecognised, one that explains as much about why Strummer was great as it does his flaws.

Garcia ends with a brief account of how, following Strummer’s departure, Rhodes seriously considered keeping a Clash going, putting together new bands under the brandname, and running things like a football manager. None of this is official Clash history; Cut The Crap itself was airbrushed from existence on the canonical Sound System box set. But Garcia’s film is a useful supplement to Westway To The World. It’s important to remember this thorny, shabby, sad and stupidly funny flameout. It was never slogans or even ideals that mattered, so much as The Clash’s very human passion, the messy confusion that drove them to try, to fall, and to try again.
EXTRAS: None.
Damien Love