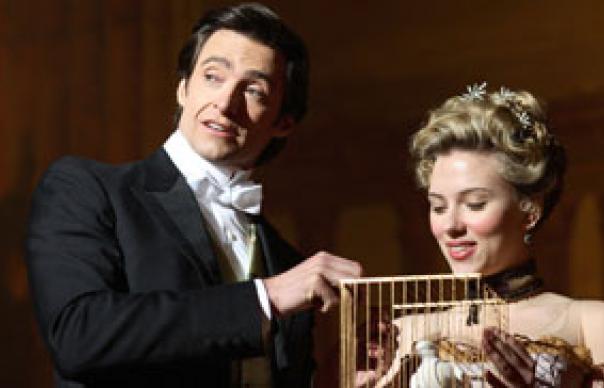 Batman director Christopher Nolan has been interested in adapting Christopher Priest’s novel about two feuding Victorian magicians since the week he finished shooting Memento back in 2001. Nolan’s movies have always been concerned with identity, trompe d’oeil and sleight of hand all of which are central to Priest’s novel.

Co-writing with brother Jonathan, the director’s developed a story that exhibits his avowed love of Welles’ alchemy of angles and perspective. Boasting a heaven-sent cast, The Prestige is a heart-pumping thriller and mesmerising mind-game. There hasn’t been a tighter, more every-second-counts movie since, well, Memento. You immediately want to see it again, to fathom where the smoke and mirrors fooled you, where this brilliant director wilfully misdirected you.

The title refers to the third and final “act” of any successful conjuring trick; the transformative moment when the magic happens. In fin de siecle England, Robert Angier (Jackman) and Alfred Borden (Bale) are up-and-coming illusionists, mentored by sage-like Cutter (Caine). Angier’s a flashy, elegant showman, Borden a Cockney tough with more natural talent and, initially, greater keenness to get his hands dirty. When Angier’s wife (Piper Perabo) is killed in an onstage accident, he lays the blame at Borden’s door.

The rivalry escalates, as does their fame. Soon it’s out of control, with neither baulking at inflicting physical/psychological harm on each other. Glamorous assistant Olivia (Scarlett Johansson in a minor, bosomy role) is a trophy pawn. Using complex flashback structures, we’re read their diaries as Borden faces trial for Angier’s murder.

We learn that a tormented Angier travelled to Colorado to seek out electrical pioneer Nikola Tesla (David Bowie, rueful, precise) whose inspiration helps him create the ultimate trick to better his foe; meanwhile both anti-heroes allowed spiralling obsession to wound those closest to them.

The intensity is palpable; how it’s achieved, less so. Breathtaking fast edits and multiple cut-aways bounce you between various time frames until the truth behind the bells and whistles is (perhaps) revealed. From its opening line – “Are you watching closely?” – to the final heartbeat, this is Nolan at his best – pushing every inch of the form’s envelope yet keeping you twitching on the seat-edge.