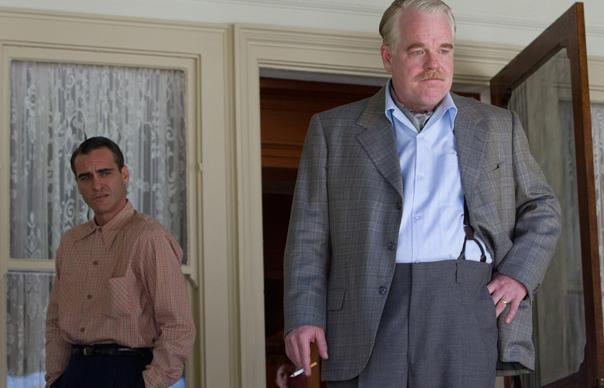 Paul Thomas Anderson begins and ends The Master with the same image: Freddie Quell (Joaquin Phoenix), lying on a beach in the South Pacific in the closing days of World War II, nestled up close to the figure of a woman carved in the sand. Bent out of shape by the war, he is alcoholic and possibly deranged. In a series of weird, unconnected images, we see Freddie siphoning petrol from the tank of an aircraft, masturbating into the Pacific surf, lying in a hammock on a warship. These are near-silent passages, sountracked by Jonny Greenwood’s arrhythmic, percussive score that brings to mind Jerry Goldsmith’s music for Planet Of The Apes.

Anderson follows Freddie as he gradually slips between the cracks in post-war America. We see him working as a photographer in a department store, brewing up hooch in the dark room and seducing a store model; he’s sacked for fighting with a customer and ends up chopping cabbages, finally chased across a field in the early morning light. In 1950, he crosses paths with Lancaster Dodd (Philip Seymour Hoffman), leader of modest pseudo-scientific cult The Cause – the one man who might be able to anchor Freddie, if only he’d let him. This, effectively, the opening 30 minutes of the film, is among the best work Anderson has done – exquisitely photographed, perfectly paced, packing so much data and information in. It promises much more, sadly, then the rest of the film delivers.

The Master is Anderson’s first film since There Will Be Blood, and the two films share some similarities, at least superficially. They are both epic in scale, both have period settings, and both feature two men locked in conflict (and both films feature Jonny Greenwood scores). But The Master felt like a more intimate film that its predecessor and arguably more closely resembled Boogie Nights in its depiction of characters on the margins of society. Also, The Master doesn’t feel as odd or psychotic as its predecessor; nor does it feel quite as meaty. Although set in a cult, it isn’t really a film about Scientology. Although Freddie and Dodd are meant to be in opposition to one another, often this comes across as thespy jousting, the roasting of ham. Freddie’s inarticulate rages are dialled-up too far. Hoffman’s Dodd is more interesting: a spiritual entrepreneur of extraordinary charisma, he is nevertheless paranoid, prone to sudden outbursts of anger, possibly sexually rapacious. As one character observes, Dodd is “making it up as he goes along.” What does he see in Freddie? Is it the challenge? Is it paternal? We’re never clear. After lengthy scenes where Dodd interrogates Freddie, you sense the meat of the conflict between the two men is over; Anderson doesn’t know quite where to take the picture.

Amy Adams is terrific as Dodd’s wife, the steely power behind the throne, bitterly mistrusting of Freddie. Anderson creates a beautiful if strange version of 1950s America, shot in a kind of period Kodachrome by Mihai Malaimare Jr (the early sequences, of Freddie working as a photographer in a department store, are astonishingly authentic, from Malaimare’s camera stock to the period detail). But it’s full of disturbing and arresting things, imperceptible shifts in reality: Steinbeck via John Wyndham. This is more character study than story. Yet, it feels as shallow as The Cause itself, as maddeningly opaque as Dodd’s motivations.
Michael Bonner