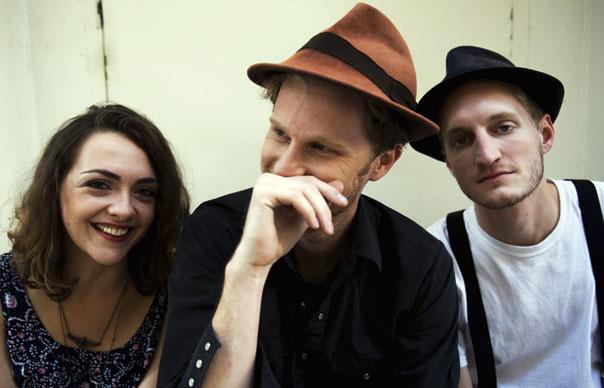 A rambunctious trio based, rather incongruously, in Colorado, The Lumineers create primal, pounding folk music which lead singer Wesley Schulz has likened to the sound of a “bunch of sailors on a ship, arm-in-arm”. But it’s not just that they make music worth hearing; in their lengthy slog to overnight success the band also have a tale worth telling.

Originally from New Jersey, Schulz spent the best part of the last decade writing, demoing, performing and working numerous side-jobs, only to end up somewhere close to nowhere. Having landed in London, China and finally New York, he and Jeremiah Fraites, his songwriting partner-in-crime for the past seven years, found themselves feeling increasingly marooned among the hipsters and tricksters of Brooklyn.

In the end they struck gold in the Rockies. In 2009 Schulz and Fraites decamped to Denver. Enlisting cellist Neyla Pekarek, they honed their songs and let a little mountain air into their music, before heading up to Seattle last summer to record these eleven tracks. Even before the US release of their debut album in April The Lumineers had begun to build a buzz, partly down to incessant touring but also thanks to key exposure on TV and radio. By this summer their album had risen to 11 in the US charts; the single “Ho Hey” has to date shipped somewhere north of half a million copies.

In truth they have better songs, but as their vanguard anthem “Ho Hey” makes for a broadly representative advance party as they attempt to replicate their Stateside success in the UK. A cross between a briny sea-shanty and a chain gang stomp, the chanted verse is lifted by a chorus straight from a back room hootenanny. At these moments The Lumineers sound like nothing more adventurous than above-average roots revivalists. A propensity for pounding acoustic music, combined with period clobber, invite parallels with Mumford and Sons, the Avett Brothers or a more earthy Arcade Fire, comparisons which hold water through at least half of this record. The likes of “Flowers In Your Hair” and “Stubborn Love” are all stamped rhythm, simple chord changes, fast finger-picking and propulsive forward motion. With its cannoning drums and primal hollers, “Submarines” wouldn’t sound out of place on Funeral. The celebratory “Big Parade” features decidedly analogue handclaps, while its borrowed words – “I was blind but now I see” – snare the aura of slightly shapeless spirituality which infuses the entire album.

This is all fine, but the best of The Lumineers lies closer to a kind of raw, spooked midnight music, suggestive of A. A. Bondy’s When The Devil’s Loose , Ryan Adams’ Heartbreaker and The Cave Singers’ No Witch. Of particular note is “Slow It Down”, a racked tale of violence, fear and tenderness which requires nothing more than Schulz’s voice and an unadorned electric guitar to conjure late-night malevolence. “Charlie Boy”, an anti-war hymn which trades platitudes for something more opaque and unsettling, is equally spine-tingling, Fraites’ mournful mandolin and Schulz’s cracked voice combining to moving affect. Crunching finale “Morning Song”, meanwhile, proves Schulz can pen a gut-twisting lyric worthy of Costello at his most self-torturing: “Did you think of me when you made love to him/Was it the same as us?”

There is sporadic evidence of a desire to stretch out into other territories. On the quietly epic “Dead Sea” Pekarek’s cello and a well-turned minor chord add a Beatlesy undertow, while “Flapper Girl” is a graceful sing-along which sounds like it was written to accompany the flickering images of a silent movie. It’s all accomplished with a nicely understated sense of drama. Nothing is overcooked, and there’s no sound or texture you couldn’t imagine being easily recreated by the band on some makeshift stage. Yet for all its attributes, this fine debut stirs as much for its sense of what The Lumineers may yet become as for what they currently are.
Graeme Thomson

Q&A
WESLEY SCHULZ
Did you deliberately want to make a very uncomplicated sounding record?
The rough edges and flaws, the humanity, is something we were consciously going for. A lot of our favourite records aren’t over produced, and we wanted a record that could be played through, front to back.

New York to Denver is an unlikely path to glory…
It was driven by economics. The cost of living in Brooklyn was too high, I had to work a number of jobs to pay rent and I didn’t have enough time to work on music. We unknowingly stumbled upon a thriving musical scene in Denver. We’d already hit our stride, the move only solidified the work because we had time to work the ideas out.

How are you coping with all the success in the US?
I don’t even know quite what it is that’s happened! It means I don’t have to work my side job anymore, and it means I get to live the life I thought I wanted for a long time. That’s an odd thing. When you get exactly what you think you’re after you have to set new goals. It’s like a dog chasing a car: what does it do when it’s caught it? In our case, we’ve caught the car. What now?
INTERVIEW: GRAEME THOMSON