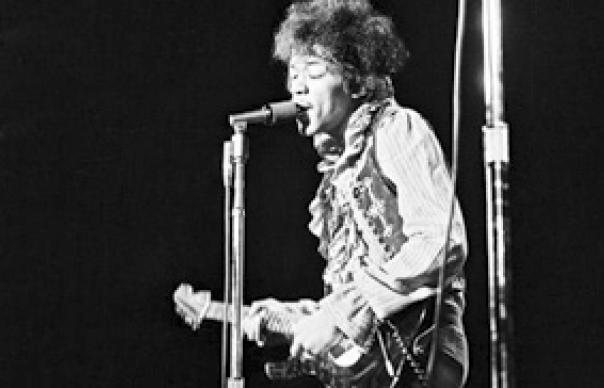 For many years, only a mad person would have entered the world of rockby collecting the music of Jimi Hendrix. Considering he’s one of themost important and exciting and so on figures in the history ofpopular music, his back catalogue was largely in worse order thanthatof, say, Candyflip.

From virtual bootlegs to identical re-reisssues, Hendrix’s legacy wasall but dumped in a skip over the years. Recently, things have got better. The catalogue has been treated with some respect and a worldwhere we can get Hendrix’s performance of “Sunshine Of Your Love” on the Lulu show is surely a good one.

And now we have the Monterey appearance. This live show from 1967 is probably Jimi’s most together, hit-crammed and enjoyable recorded gig(and he even set fire to his guitar). Other shows are louder, contain more rarities, and longer guitar breaks, but Monterey was recorded when both festivals and Jimi were younger, faster and more ebullient. Hendrix here talks more than Billy Bragg before each number and, forthe only time on a live recording, seems cheerfulrather thanstoned-cool.

Live At Monterey has been with us before – once the year of Hendrix’s death, in truncated form on a shared LP with Otis Redding, and more recently on a CD with a cover that was bad even for a Hendrix reissue (wrong burning axe!). And now it comes along in better nick, with a special stereo mix by Eddie Kramer, which doesn’t sound that different to last time around but is nice and clear and takes us away from the’60s mud of much of Hendrix’s work.

The only hard-to-understand partis Brian Jones‘s introduction, and that’s due to drug lag rather than recording quality. And it’s very good, from its delivery of Jimi’s hits (a snappy”Purple Haze”) and other people’s (a thunderously languid Like A Rolling Stone) to its wholesale devastation of The Troggs‘ “Wild Thing”. Bothbrilliant Hendrix starter pack and summary of everything great aboutabout his music (“Killing Floor” still sounds like an avalanche onfire), this is something everyone should own.