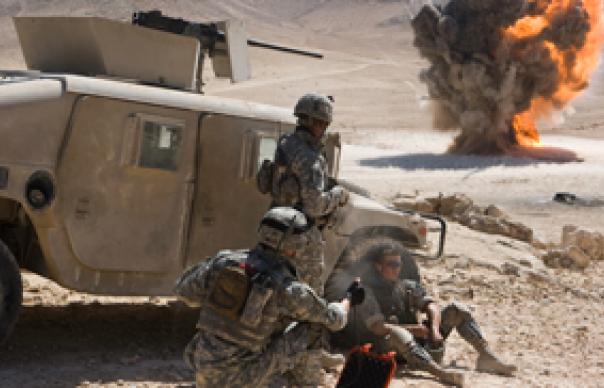 What we commonly acknowledge as the great American films about the war in Vietnam all came after the conflict had been decided. Hollywood’s response to what was happening there when the bombs were actually falling was confined principally to John Wayne’s gung-ho 1968 flag-waver The Green Berets and the same year’s cheapo exploitation flick The Losers, a Quentin Tarantino favourite, a glimpse of which we see in Jackie Brown, about a gang of Hell’s Angels who go east to kick VC ass with predictably noisy results.

The Boys In Company C and Go Tell The Spartans followed eventually in 1977, but were both essentially reiterations of WW2 combat movies uneasily relocated to the recent past and uncertain of the moral and political context in which they now found themselves. The Deer Hunter, the first of the great Nam movies, came out in 1978, Apocalypse Now a year later, with Oliver Stone’s Platoon, Kubrick’s Full Metal Jacket and Brian De Palma’s Casualties Of War, much later additions, all coming over a decade after the war’s bitter end.

Hollywood’s engagement with the current insanity in Iraq has been less tawdry, but so far variable. Stone deals caustically with the build-up to the 2003 invasion as part of the Bush administration’s War On Terror in the blackly comic W, while the under-rated In The Valley Of Elah examines the domestic impact of the war. Elsewhere, Robert Redford’s Lions For Lambs is dim-wittedly worthy and largely unwatchable, unlike De Palma’s Redacted, almost a remake of Casualties Of War, whose angry disgust is not easily ignored and worth a second look.

You’d have to say, though, that none of these has matched to any reasonable extent David Simon and Ed Burns’ HBO mini-series Generation Kill, brilliantly based on the book by Rolling Stone journalist Evan Wright, who was embedded during the first months of the invasion with Bravo Company of the First Reconnaissance Battalion, which ends not long after the so-called liberation of Baghdad, where even as Bravo Company pull out insurgent bombs are starting to go off, Saddam successfully deposed but the war far from over.

Until I saw Kathryn Bigelow’s stunning new movie, I would have thought it impossible to improve on Generation Kill’s re-creation of the messy calamity authored by the Bush-Blair alliance. But The Hurt Locker is more harrowing still, one of the greatest American films of the decade, certainly the best American movie since There Will Be Blood, shocking, overwhelming and unforgettable.

It’s set in Baghdad in 2004, during the last 38 days of a year-long tour of duty by a three-man unit of the US Army’s Explosive Ordnance Disposal Squad, a volunteer elite, specially trained to dismantle IEDs (improvised explosive devices). When the film opens, Bravo Company have lost their team leader, a brave and sensible, by-the-book sergeant whose replacement, Staff Sergeant William James (Jeremy Renner) whose approach to his work is what you might call unconventional. In fact, in the worried opinion of his new colleagues, JT Sanborn and Owen Eldridge (Mackie and Geraghty), James is wholly reckless, as dangerous to their continued well-being as any of the devices they are asked to deal with.

Written by former Village Voice columnist Mark Boal(who also co-scripted In the Valley Of Elah) and based on his own experience as a journalist embedded with a bomb squad in Baghdad, The Hurt Locker follows the fractious three-man squad through the fraught final days of their posting via a series of increasingly terrifying, unbearably tense set-pieces, incredibly staged, to which Bigelow fully brings her unbeatable gifts for action and suspense – including several absolutely nerve-shredding bomb disposals, one of which features the dismantling of a so-called ‘body bomb’, crudely stitched inside the mutilated corpse of a young Iraqi, that will have audiences looking anywhere but the screen.

There’s also a brutal desert ambush, in which Bravo Company and a group of contract bounty hunters led by Ralph Fiennes, who memorably starred in Bigelow’s terrific millennial noir, Strange Days, are pinned down by insurgents, in which by their actions rather than what they have to say to each other, which is not much at all, we learn volumes about the characters of James and Sanborn.

Great as she is at outstanding action sequences of often awesome ferocity – as evidenced previously in films like Near Dark and Point Break – what most interests Bigelow isn’t so much the war itself or the political ideologies that led so inevitably to it. What she is most concerned with is how these men react to the daily crisis of being where they are, how they individually cope with accumulative stress, anxiety and danger. You think, as a consequence, of Hawks and Ford and the male communities around which so many of their films are set and the various notions of heroism explored therein, these men defined by what they do and how well they do it.

In an outstanding ensemble cast, Renner is astonishing as the fatalistic, apparently fearless James, a character who in a lesser film may have been not much more than a macho cipher, but who is here intricately drawn, as complicatedly wired as any of the explosives he is called upon to defuse. Renner has something of the swagger of the young Harvey Keitel, a raw energy barely contained. James offers no view on the war he has found himself part of, the rights or wrongs of it. He just gets on with the job he has volunteered to do and takes professional pleasure in doing it expertly. As well he might. After all, if he fucks up he’s dead.

There’s a thrill in it for him, for sure. But beyond this, with nothing more between himself and death by detonation than his own wit, cool intelligence and a pair of pliers, he is master of his own fate, free of the common realities by which, back in the world, he feels reduced. In the face of death, he becomes wholly alive and the feeling for him is addictive. While Sanborn and Eldridge can’t wait for their tour of duty to come to a blessed end, we begin to understand that James dreads a return to ‘normal’ life perhaps more than the daily terror he faces on the streets of Baghdad.

The Hurt Locker’s almost wordless domestic coda, with James returned to his estranged wife and child, a quietly harrowing scene in a vast supermarket in which he stands mute and alone, overwhelmed by an unnameable loss, is as harrowing in its way as any of the more obvious horrors we have previously seen and we are perhaps not surprised by what happens next, which we recognise as agonisingly inevitable.