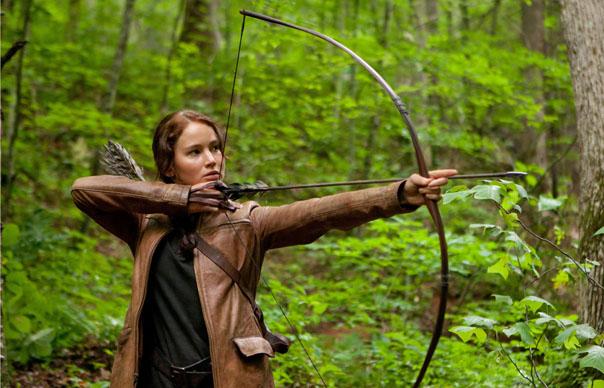 The Hunger Games arrives in cinemas accompanied by a flurry of statistics. We are told that that the day advance tickets went on sale in America one online retailer reported that the film accounted for 83% of the sites total sales. Elsewhere, tracking reports claim 23% of cinema audiences listed The Hunger Games as their ‘First Choice’ pick of forthcoming movies and 54% claim ‘definite interest’ in the film. Forecasters, meanwhile, are predicting it could take between $75 and 100 million in its opening weekend.

Although undeniably impressive, these numbers conversely suggest a mild nervousness at work here. The Hunger Games, adapted from a trilogy of teen novels, operate on a very different business model from Twilight, the property to which they’ve become routinely compared. For all its supernatural attributes, the Twilight series was deeply conservative at heart. But The Hunger Games offers different, more interesting vibes. Its roots lie in that strand of dystopian science fiction from the 1970s that gave us Rollerball or Logan’s Run, or more recent films like Battle Royale. There’s no real box office precedent for this kind of movie among teen audiences, and with Harry Potter done and only one more Twilight movie to come, Hollywood might understandably appear especially anxious to keep those audiences happy.

Out in the boondocks of post-apocalypse America, contestants are selected by lottery and sent to the Capitol as “tributes”, where in the name of TV entertainment, they will kill one another in pretty woodland surroundings in The Hunger Games. The purpose of this seems to be to amuse the dandified denizens of the Capitol, while also serving to keep the poor folks out in the Districts in check. Donald Sutherland, as the Capitol’s President Snow speaks knowingly about keeping the downtrodden trodden down while lovingly pruning his roses in his expansive garden – always a sign of a bad guy. Meanwhile, Jennifer Lawrence, as District 12’s ‘tribute’ Katniss Everdean, struggles to stay one step ahead from both her fellow contestants and various perils deployed by TV producer, Seneca Crane (Wes Bentley).

The film is played totally straight. With its tin shacks and feral-looking children, District 12 looks like the Ozarks of Winter’s Bone – indeed, as she eludes her pursuers here, you might think Jennifer Lawrence is channelling the same kind of ingenuity she displayed as Ree in Debra Granik’s film. The Capitol itself looks like the Emerald City from Return To Oz, a vast metropolis where everyone has blue hair and spray-on make-up. Woody Harrelson delivers a good extended cameo as Katniss’ mentor, a former champion himself, who suggests she “embrace the possibility of your imminent death” with the right degree of cynicism. Stanley Tucci and Toby Jones, as co-anchors of The Hunger Games TV show, provide commentary straight from the Simon Cowell school of cliché.

Indeed, if there is one obvious target here it’s reality TV shows, and director Gary Ross doesn’t entirely shirk from displaying some satirical teeth. The idea of a future society where the state controls the population through lethal games is familiar from films like Rollerball, The Running Man and even Doctor Who, but retooled in the era of Simon Cowell gives is some fresh purpose. There are plot holes in the narrative, and there’s no clearly defined bad guy for Katniss to face-off against (apart from a couple of posho bullies from District 1). Sutherland is too remote a presence while Wes Bentley’s beard is too silly for him to be taken seriously as a baddie. The success of The Hunger Games, though, rests with Jennifer Lawrence, who brings the right degree of resourcefulness and vulnerability to Katniss. And she is good with a crossbow, too.