Up, up and away! Epic art-rock set from outsider heroes... 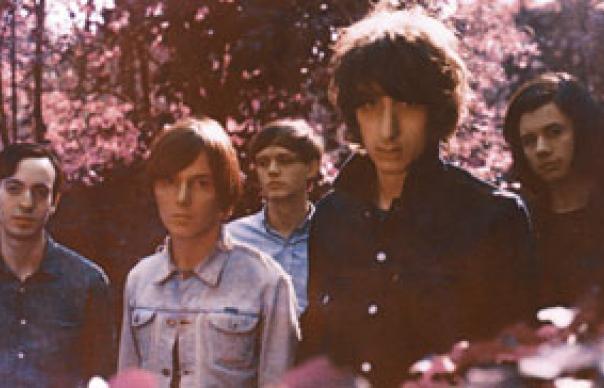 The Horrors were viewed with some suspicion when they first emerged from Southend six years ago. A provincial gang of five exotically coiffed teenagers going by such names as Coffin Joe, Joshua Von Grimm and Spider Webb, they resembled a Tim Burton vision of The Cramps, and sounded like one, too, lacing their white-knuckle garage-rock with a macabre, cartoon viciousness.

They made the cover of NME and won influential fans, such as dark-arts filmmaking maestro Chris Cunningham, who came out of promo-directing retirement to shoot the video for “Sheena Is A Parasite”. They did not, however, immediately resemble the sort of band built to last. The look was fine-honed, but debut album Strange House<.strong> was somewhat slight, and it was hard to shake the impression that this was a band that privileged style over substance.

Behind the image, though, The Horrors were deadly serious about the music. They were DJs, and collectors – of obscure vintage musical equipment, and of equally obscure records. They put on club nights like the Cave Club and the Convex Club, in underground London drinking dens. Like Primal Scream, they were seduced by the idea of being in a band as much as the desire to play music together, and The Horrors became a vessel to fill with arcane influences and sonic touchstones: The Stooges and The MC5, Phil Spector and Joe Meek, Detroit techno and Chicago house.

Assimilating such diverse influences might, in the hands of some, feel contrived – but the beauty of their second record, 2009’s Primary Colours, is that it sounded entirely like a band being true to themselves. Ten tracks of luminous, expansive post-punk, it was a handsome blend of Neu!, Motown and MBV that enchanted critics, and sold nicely, too, swelling The Horrors’ already sizeable fanbase. It was nominated for the Mercury Prize, NME voted it album of the year. But it wasn’t just the contents that impressed; it was the manner in which these misfits knuckled down and returned with such an assured new sound. One thinks of Screamadelica following Primal Scream, or The Cure releasing Seventeen Seconds after Three Imaginary Boys – the feeling of, wait, where did that come from?

Skying, The Horrors’ third, again brilliantly confounds expectations. Its roots lie in early 2009, towards the end of the sessions for Primary Colours, when the young band met for an Indian meal in Bath with their producer, Geoff Barrow of Portishead. Talk turned to plans for the next record, whereupon Barrow makes it clear he believes they no longer need any help in the studio. They are more than capable of producing this third one themselves, he reckons. The band are amazed, flattered. So, back in London, they set to work building a home studio, from which Skying would, two years later, emerge.

Richer, heavier, more lustrous than Primary Colours, this is the band left to their own devices, shut away from the outside world, writing and playing their version of pop – pulsating six-minute songs called “Dive In” and “Endless Blue” that start with a canter only to soar beyond the clouds. Simple Minds may not be the most fashionable reference, but there’s a cocksure, anthemic lift to surging power-ballads such as “Still Life” and “You Said” that recalls the Breakfast Club prime of the Scots band. Whether this is by accident or design, it’s a sign that The Horrors are daring to make music for the grand occasion. If Primary Colours established The Horrors as outsider icons, the record acting as a gateway to a world of krautrock, noise, ’60s beat-pop and psych, then Skying finds them greatly improved as musicians, their horizons broadened and technique honed, ready for the big time.

‘Skying’ itself is an early technical term for phasing or flanging, an effect commonly found on guitar pedals and analogue synths that gently distorts a signal to produce a satisfyingly ragged sound. No doubt it’s a favourite setting of Joshua Hayward, The Horrors’ endlessly inventive guitarist whose fondness for circuit-bending means he’s on first-name terms with the staff of his local Maplin’s and leads him to build his own pedals and contraptions through which he coaxes an extraordinary range of sounds. His solo four minutes into the album’s finest song, “Moving Further Away”, when a throaty lick rips through soft electronics like silk being torn apart, has a primitive sensuality that’s almost shocking. The beautiful cacophony he generates on “Monica Gems” suggests The Horrors have their own Kevin Shields.

Written during a session in a country house in Devon, “Moving Further Away” was the only song recorded outside their new east London studio; ironically, for a set of songs largely concerned with nature, they found that the countryside wasn’t a particularly stimulating place to make music. Taking Barrow’s advice, the five set about producing the album themselves, which was not, perhaps, as idyllic as it sounds.

There was no one there to say, “So, what do you think of that?”, so the band had to weigh up the options and execute the best ones. They do have extracurricular studio experience: keyboardist Tom Furse has turned in several disco-slanted remixes, while, as Cat’s Eyes, frontman Faris Badwan recently cut an album of spooked girl group-inspired pop with Canadian soprano Rachel Zeffira.

More obviously, the images the title conjures seem appropriate for the record: with Skying, the band wanted to capture that feeling of rushing down a hill, of propulsion and elevation, both spiritual and emotional. That they’ve partly achieved this by innocently turning the clock back 20 years to that golden age of British indie is more a reflection of their youthful idealism than anything else. Shades of shoegazers Ride, Slowdive and The House Of Love colour the vivid swoon of “You Said” and “I Can See Through You”, and the prevailing mood of the album – one of frazzled, delirious joy – combined with the elemental imagery in Badwan’s lyrics reveals an unlikely but welcome affinity with late-’80s Julian Cope. “Wild Eyed” might be a groovier number from Peggy Suicide, although as of now, Badwan still falls a little short of the shamanic conviction of the bard of Avebury.

Give him time. When they formed, The Horrors’ sole aim was to put out a 7” and contribute in a small way to the wealth that had enriched their lives. Six years on, they’ve become one of our most cherished bands, a genuine cult act who’ve managed to preserve their mystique while growing in stature with each new record. If it’s taken them this long to go from nothing to Skying, where on earth will they take us in the next five years?
Piers Martin