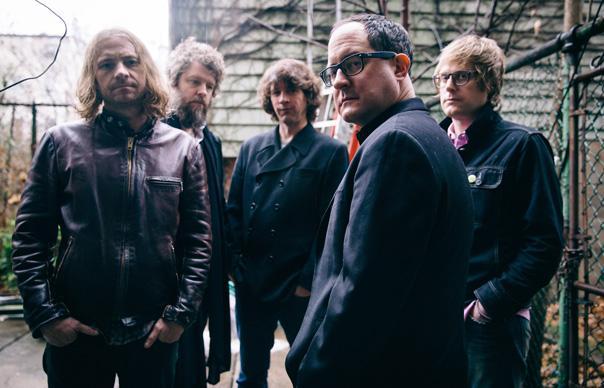 It has been four years since we last heard from The Hold Steady. This has been an uncharacteristically protracted silence: the same length of time in which they issued their first four albums, in that feverish, urgent burst between 2004’s Almost Killed Me and 2008’s Stay Positive. During this layoff, The Hold Steady’s lineup has been slightly reshuffled – guitarist Steve Selvidge, late of the under-regarded Lucero, has been promoted from touring adjutant to full member. This completes a significant evolution in The Hold Steady’s sound, from a heavy reliance on the thunderous keyboards of Franz Nicolay – who left before the recording of 2010’s Heaven Is Whenever – to a triple-guitar attack including incumbent lead player Tad Kubler and frontman Craig Finn. It suits them: Teeth Dreams is The Hold Steady’s least fussy, least mannered, least arch album. Not coincidentally, it’s very possibly their best.

Fine though The Hold Steady’s previous albums have been, there’s always been something somewhat over-eager and over-anxious about the group, a self-consciousness that made them sound too keen to impress, and therefore – as is the cruelly paradoxical way of these things – less likely to actually do so. Listening to them often prompted the same unease as watching Finn’s frenetic, hyperactive stage demeanour: an admiration for the energy being brought to bear on proceedings, competing with a somewhat exhausted wish that he’d just settle down and let the songs – and their audience – breathe a little.

If there’s one song on Teeth Dreams emblematic of this looser-limbed incarnation of The Hold Steady, it’s the second track here, “Spinners”. In some respects it’s another great big Hold Steady anthem, in the manner of “Massive Nights”, or “Stay Positive”, but it lopes and slouches amiably where its predecessors were clenched, sweaty and seething. It’s not the last point at which Teeth Dreams reminds uncannily of “English Oceans”, the imminent and surprisingly pretty new album by The Hold Steady’s former touring companions, Drive-By Truckers.

Similarly, the fantastic “On With The Business” sees The Hold Steady sounding less like they’re giving some sort of lecture in how to be a literate, intelligent rock’n’roll band, and more like theyve settled in to just being one. Kubler’s solo here is sensationally unreconstructed: another defining delight of Teeth Dreams is his resignation to his status as an old-school guitar hero: he has already admitted that the Elvis Costello-joins-Aerosmith rocker “Wait A While”, another highlight here, was a consequence of fiddling around with the opening riff of Joe Walsh’s “Life’s Been Good”. At which point one recalls that Kubler is possibly the only guitarist who has unironically deployed a twin-neck Gibson in the last forty years, and one wonders if this is the album he has always wanted to make. It sounds like it, especially on the likes of “Runner’s High”, which Kubler closes with a gleefully Skynyrd solo.

Finn’s words are also noticeably less forced and prolix than previously – usually an indication of a solidifying confidence. It’s visible in the very track listing. Only one song has an instantly recognisable Hold Steady title – the opening “I Hope This Whole Thing Didn’t Frighten You”, which sounds something like a choking, claustrophobic Thin Lizzy (a compliment, in this context). Every other title is barely a fistful of syllables, Finn no longer so determined to tell the whole story in the headline.

Finn’s lyrical preoccupations haven’t evolved significantly. He’s still drawn to the lost and lonely, like the damaged drifter “sleeping at a storage space by the airport,” in the swaggering, Gaslight Anthem-ish “The Only Thing”, or the barfly losing her buzz in the stately ballad “The Ambassador” – an establishment in which “The nights were hot and hissing like an iron/The days spent climbing walls like a vine.” But he’s more content than previously to let the characters stand (or, as is more often the case in Finn’s universe, fall) on their own merits: nothing on Teeth Dreams feels oversold, not even the nine-minutes-and-change closing epic “Oaks”, the fade-out of which suggests that there was plenty more where it came from.

None of which is to suggest that Finn has embraced a regime of clipped, Elmore Leonard-esque terseness – the lyric sheet for Teeth Dreams comfortably clears 3,000 words, few of them repeated. And this is a good thing – Finn remains one of very few rock lyricists whose voice is audible from the page as well as the record. If a song begins, as “On With The Business” does, with the line “I’m really sorry about that prick in the parking lot/I wanted this to be our year,” you want to find out what happens next (in this case, a hint of what might result were Buffalo Tom commissioned to write “Breaking Bad: The Musical”). And when, on penultimate track “Almost Everything”, The Hold Steady permit themselves the indulgence of the acoustic lament of life on the road, they evade hubris deftly with a hallucination of humility: “The bus it rolled up into Franklin at dawn and everything seemed super slo-mo/The Waffle House waitress that asked us if we were Pink Floyd.” It’s a lovely moment, though by this point on such a musically exuberant album the lack of a head-back, scrunch-eyed “Wanted: Dead Or Alive” solo by Kubler seems rather a shame.

Another absence from Teeth Dreams is more significant. Give or take the refrain of “I served my purpose” on “Big Cig” – far and away the most old-school Hold Steady song here – there are none of The Hold Steady’s signature oh-woh-woh singalong choruses. Crucially, triumphantly, they’re not missed. Now that The Hold Steady have stopped clamouring for our attention, they deserve it more than ever.
ANDREW MUELLER

Q&A
Craig Finn
Why Teeth Dreams?
They’re anxiety dreams, and a lot of people have them. I was thinking a lot about anxiety, and these anxious times, and whether all times are anxious and that’s just the human condition.

It has been four years. Was there a point at which you doubted there’d be another Hold Steady album?
Before we made Heaven Is Whenever, we’d released so much music in such a short time, and everyone was kind of fatigued, which showed its head on the last tour. The shows were starting to suffer, everyone had spent too much time on a bus, and physically, singing-wise, things felt like a strain.

Did your solo album and touring acoustically – by yourself and with Patterson Hood and Will Johnson – teach you anything you could bring back?
The Hold Steady are really loud, and I’m pretty much just the lyricist, so when we go and blow it out, and I can’t hear the vocals, I can end up feeling like I’m serving no purpose. So going out and doing these quiet shows allowed me to cut through and deal with the storytelling. But it did get me excited about playing loud again. You play quiet, and crowds react quietly. Nobody throws beer in the air – and after ten years in The Hold Steady, you kind of need that for validation.

On the subject of ten years, you recently celebrated that anniversary by returning to the first venue you played at (Brooklyn’s Music Hall of Williamsburg, previously known as Northsix). Thinking back to that show, did you have a ten-year plan then?
There was no plan. We were literally having conversations: we were never going to make a record or play a show, because those are no fun. The only fun is drinking beer in a practice space. I’m not sure there was a plan for a second show. So we exceeded expectations after about three weeks.

Did you decide to make such a big rock album on Teeth Dreams, or did it just work out that way?
The addition of Steve [Selvidge, ex-Lucero], who joined to tour the last record, makes everything much bigger. Also, the producer, Nick Raskulinecz is a big rock guy [credits include Foo Fighters, Alice In Chains, Rush, Deftones, Evanescence] and he brought his own sensibility. And at 42 years old and six records in, making a mellow record would have been obvious.”

You do allow yourself the gently-strummed acoustic lament for life on the road, on “Almost Everything”.
That was originally an electric thing, but Nick, the producer, said we should do it acoustic. It hopefully has a level of self-awareness. There’s so much character-driven stuff on the album, it was nice to have one song to say, here’s where we’re at.

On the subject of characters, this isn’t The Hold Steady album where you suddenly start writing about confident, fulfilled, self-assured winners.
No, it’s not. But that’s also partly because the album became this big rock thing, so when I wrote the words, I wanted to write something cinematic. I’m still attracted to people making those decisions which lead to dramatic outcomes, those dislocated people who are just trying to get ahead, or trying to escape things.

How did the writing work? Did someone call someone to end the hiatus, or had work always been going on?
It varied. Steve lives in Memphis, and we all live in Brooklyn, so we’d fly him up here and say ‘Write,’ but that felt too formal. So when I did my solo tour, the other guys went to Memphis and wrote, and sent me stuff, and then we eventually got together and wrote a tonne more. We played the producer 20, he chose thirteen, and I think there were another ten we didn’t even play him.”

You’ve also been working on a covers EP.
We have. It’s called ‘Rags’. It’s for our fan club, The Unified Scene, trying to raise money for the family of a friend of ours, a promoter in Harrisburg, who passed away and left two kids. We each brought in a song. So there’s Dr Feelgood’s “All Through The City”, “Hard Luck Woman” by Kiss – we had to do a Kiss song – “I Gotta Get Drunk” by Willie Nelson and “Closer To The Stars” by Soul Asylum. My choice was Those Bastard Souls’ “The Last Thing I ever Wanted Was To Show Up And Blow Your Mind”.

Which sounds like a Hold Steady title. Which, aside from the opening track, “I Hope This Whole Thing Didn’t Frighten You”, can’t be said for any of the titles on Teeth Dreams.
Yeah, I noticed that, as well. It does have a lack of long titles. It’s just how it worked out. I think some of the ones we ditched might have sounded more familiar.

Are you personally thinking of future projects beyond The Hold Steady?
Eventually, yes. But I’m hoping I won’t have time for any of them this year. I just want to go out with The Hold Steady, and go hard.
INTERVIEW: ANDEW MUELLER