Here’s no mud in your ear! The Johnny Thunders gang’s epochal 1977 album restored (yet again), with demos, alternative mixes... and badges! 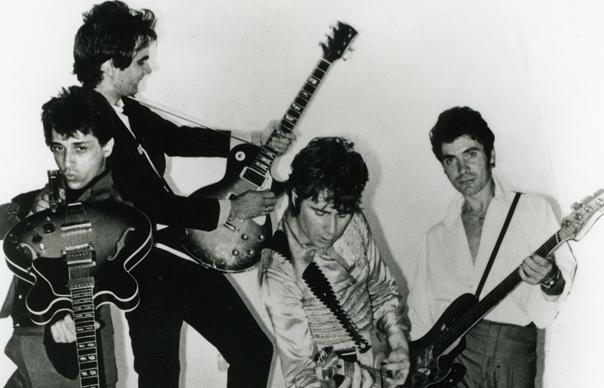 Here’s no mud in your ear! The Johnny Thunders gang’s epochal 1977 album restored (yet again), with demos, alternative mixes… and badges!

Veterans of this campaign may well raise a weary eyebrow over that “definitive” claim. That L.A.M.F., the only album by Johnny Thunders’s swaggering, smacked-up post-New York Dolls outfit, The Heartbreakers, is one of New York punk’s defining artifacts (despite being recorded in Britain) is beyond dispute: twelve songs that put the guitarist’s abiding passions – Chuck Berry, the Stones, Phil Spector and Shadow Morton girl groups, glam, garage, trash and junk – in perfect, speedy collision.

What’s equally undeniable, though, is that it has been victim to one of the most tortuous release histories in popular music. Feverishly anticipated, L.A.M.F. – inspired by graffiti New York gangs used to tag their turf, it stands, of course, for “Like A Motherfucker” – was met with widespread dismay in 1977, due to a mysterious sound fault that notoriously submerged the band’s switchblade style deep in murk.

Attempts to rectify the sonic situation have been ongoing ever since, with the result the album has now been issued and reissued in a plethora of differently “restored” iterations. But trying to get back to the record the band intended has proven a thorny business.

The first sleazoid supergroup of New York’s downtown scene, The Heartbreakers formed in April 1975, when Thunders and drummer Jerry Nolan acrimoniously quit The Dolls and hooked up with Richard Hell, who had left Television in similarly bitter circumstances the same week, and was developing a similarly heavy heroin habit. Recruiting louche and looming guitarist Walter Lure, the original Heartbreakers fused Hell’s wired poetic concerns with a simpler, rawer rock sound, led by Thunders’ swashbuckling guitar, but the volatile combination of ego and addiction saw Hell quitting after a year, replaced on bass by sometime gigolo Billy Rath.

A more straightforwardly rock’n’roll proposition, Heartbreakers Mk II built a ferocious live reputation on the CBGBs circuit, but also had another reputation – for drugs, bad news and trouble – that meant no American record label would touch them. So when one-time Dolls manager Malcolm McLaren invited them to the UK to join the Sex Pistols’ Anarchy Tour, they were ready to try their luck in pastures new.

Luck, though, was something the Heartbreakers never really had. Arriving just as Grundygate outraged the nation’s tabloids, they found the tour disintegrating as sixteen of nineteen gigs were cancelled, leaving the band stranded without wages over the winter of 1976. A string of hastily arranged London shows built another fervent following, however, and attracted Track Records, The Who’s label, with who they finally signed early in ’77 – blissfully unaware that Track was in financial disarray.

Despite some junkie monkey business, and Track’s debatable choice of Thunderclap Newman vocalist Speedy Keen as producer, recording sessions for *L.A.M.F* passed off relatively smoothly. It was only when the band heard pressings of “Chinese Rocks,” the my-life-under-smack anthem written by an eternally disputed combination of Dee Dee Ramone, Hell and Thunders, selected as the ideal lead single, that the trouble began.

Deeply unhappy with how the record sounded, the group launched into a protracted period of remixing all the songs. With Nolan in particular growing obsessed the mix was to blame, but unable to pinpoint the problem, the Heartbreakers spent months tinkering in an increasingly frantic cabin fever atmosphere. Eventually, they amassed over 250 mixes. It might have gone on forever, but Track ordered the record released in October ’77, to the fury of Nolan, who quit. Ironically, much later, it emerged the mix was never the problem: it was a persistent mastering flaw, as the tapes were transferred to vinyl.

Taking a lead from rumours leaking from the studio, reviewers zeroed in on the album’s sound problems: “[The Heartbreakers] are mutilated beyond all dignity,” frothed Julie Burchill in the NME, “[producers] Speedy Keen and Daniel Secunda deserve at the very least to have their ears cut off.” In Sounds, Jon Savage was less savage, but flung the word that stuck: “the songs… sound muddy.”

Confirming suspicions that the Heartbreakers were too messed up and sloppy to deal with, the response to the album hastened their demise. But the idea of restoring L.A.M.F. to its intended glory became a punk holy grail.

When Track went under in 1978, Heartbreakers manager Leee Black Childers broke into the offices to liberate the tapes. The masters were missing, but those 250-odd remixes remained. The first major reconstruction came in 1982, when Thunders reworked the tapes as L.A.M.F. Revisited, hailed as the
definitive version. In 1994, three years after Thunders’s death, there came another complete overhaul with L.A.M.F: The Lost ’77 Mixes, hailed as… well, you get the idea. Personality crisis, indeed.

Still preferred by many, Lost ’77 Mixes is included again here, but the centrepiece of this excellent 4-disc box is a carefully “de-muddied” new restoration of the original Track LP, created, in the absence of the masters, by running the 1977 vinyl through the latest mastering software. The results are, if not revelatory, at least deeply rewarding.

This restoration doesn’t have the sheer (some might argue shrill) in-your-face attack of Lost ’77 Mixes, but L.A.M.F. is revealed to have a thicker, warmer sound that proves much easier to spend time with. The bad news for fans is, you need to hear this one.

The worse news, though, is that L.A.M.F: Definitive Edition appears hot on the heels of *another* recent, highly significant, online restoration by the fans behind the whitetrashsoul blog, who discovered that various European pressings of the 1977 album were actually cut using different mixes again, and sound infinitely superior to the UK release. (I was sceptical, until I heard the aching “It’s Not Enough” unearthed from the French ’77 LP, and was gobsmacked by how its strumming bed of acoustic guitars chimed out like never before.)

The painstaking whitetrashsoul compilation is worth investigating, and comparing against the other alternative mixes amassed for Disc 4 here. The danger is, you’ll be sucked into the endless maze of trying to assemble your own “ultimate” L.A.M.F from various sources. As you wade through several subtly different versions of “Baby Talk” trying to find The One, you may find your bleeding ears going cross-eyed, and sympathise with what The Heartbreakers endured. Still one thing remains unaltered throughout: this really is one motherfucker of an album. That’s definitive.

EXTRAS: Alongside the restoration of the Track LP and The Lost ’77 Mixes, there’s a disc of early Heartbreakers demos, including four previously (officially) unreleased from the Richard Hell incarnation. The final disc offers more alternative mixes, including a “Born To Lose” that bizarrely buries Thunders’s guitar until it’s barely audible. There’s also a well-illustrated, 44-page booklet laying out the Heartbreakers’ saga, and four wee badges, to make you the envy of every punk in town.
Damien Love

Q&A
WALTER LURE
What’s your take on what happened with the sound?
WL: Everybody blamed the mix. Jerry in particular. I didn’t think the mix was bad, because when we played it back in the studio, it sounded fine. For me it was something that had happened when it got transferred from tape to vinyl. It lost the edge, got this muffled sound. To me, that pointed to the mastering. But, anyway, the mix was being blamed. We tried everything. We went to various studios, Abbey Road, I don’t know how many mastering studios, and tried to redo it. And every time: it sounded great in the studio, but as soon as went onto vinyl, it sounded like it was underwater. Jerry kept insisting it was the mix, so they gave him a few weeks in the studio alone to work on it. And his stuff came out sounding worse than the original. By this point, it was October ‘77, and the record company said, “Listen: this has got to be released.” Because they were going to miss the Christmas rush, they’d lose sales, and we’d lose our contract. They’d spent a lot of money on it by then, with all this time, eight, nine months, in different studios, bouncing around trying to fix it. So, Johnny, Billy and me said, “Well, okay.” But Jerry said if it was going to come out like that, he was going to quit the band right there. And he did. And the record came out, and that was what we were stuck with.

Leaving aside the sound problem, how was it recording?
WL: Well, we knew the songs inside out, because we had been playing them live for two years. So that was no problem. Toward the end, the sessions got more and more wild, because Johnny and Jerry would show up five or six hours late, because they were running around London trying to find their next pile of abusive substances. It got a bit hectic, people showing up to find they’d missed the session by 12 hours, but nothing really bad. But it was getting to the point that, if we *had* done another record, it would have been complete madness, because Johnny was getting increasingly out of control.

You were all sharing a house during that time, like some degenerate version of The Monkees…
WL: When we first got over there, we were crashing around at Sebastian Conran’s parent’s house, that December around the Anarchy Tour. Then, once we got the record contract, we moved into Pimlico, and that’s where we lived during most of the recording. A small basement flat. Me and Jerry shared a room, Billy had a room, and Johnny had a room. It got pretty nutty. Up all night. All sorts of weird people popping in and out. There’d be dealers coming over, we’d let them crash, then people would be going through their clothes in the middle of the night, trying to find their stash. Nancy Spungen came over, because she’d gotten a guitar of Jerry’s out of the pawnshop – that’s the only reason he let her in the house. And twenty minutes after she showed up, he threw her out. That’s when she went on to meet Sid, and, well, another story happened. It wasn’t like *complete* mayhem. A couple of us OD’d from time to time, and the others would throw us into the bathtub to wake us up. But other than that, it was pretty run of the mill.
INTERVIEW: DAMIEN LOVE