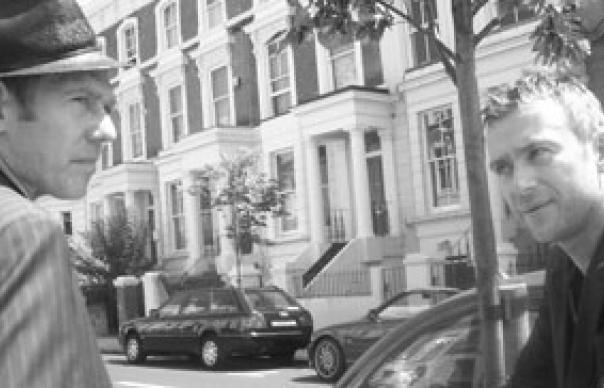 What’s driving Damon Albarn? While his contemporaries fulfil contractual obligations, noodle away on solo projects or stage belated comebacks, he continues to plot an intensely idiosyncratic, absurdly successful course through modern music. A lot of people might have considered taking a breather last year, after a holographic Gorillaz duetted with Madonna and then sold out a residency at the Harlem Apollo. Maybe sketched plans for 2007: let’s see, a theatrical collaboration with the Peking Opera and then a feature film with Terry Gilliam? Instead Albarn found the time to hook up with Afrobeat legend Tony Allen, rope in one-time Clashman and neighbour Paul Simonon and, with Danger Mouse (aka Gnarls Barkley’s Brian Burton) at the controls and right-hand man Simon Tong on guitar, cook up a psychogeographic London song suite – all debuted at the freshly renovated Roundhouse for the inaugural Electric Proms.

The energy, urgency and ambition are admirable: maybe more so than the finished record. The Good, The Bad And The Queen has been trailed as a tangential successor to Blur’s Parklife, with all the chirpy Parkway comedy soured to dreamy Westway dolour. But you could also imagine it as a sequel to The Specials’ “Ghost Town”, Ewan MacColl’s “Dirty Old Town” or even The Clash’s “London Calling”: there are spooks and echoes of them all in this cityscape of gasworks and canals, rising rivers and looming dread. “It’s the record Peter Ackroyd might have made,” Simonon told Uncut a couple of months back, and, like the historian, the record succeeds in evoking a rich lineage and atmosphere, even if it doesn’t always significantly add to it.

“History Song” sets the tone: a scratchy acoustic guitar figure, a doomy cloud of Hammond organ and those ghostly, ominous Simonon backing vocals. Out across the estuary there’s a storm brewing, and, as Albarn repeats, “If you don’t know it now, then you will do”. It’s supposedly inspired by the etymology of the expression “hangers on” – people who would clutch on to people condemned to hang in order to cut short their agony and hasten their demise. But it feels more like atmospheric mood music than a focused insight into England’s dread and dreaming. Funnily enough, what songs like this and “Green Fields” (with its evocation of “the tidal wave and war [that] engulfed us all”) really put me in mind of is the linocut artwork Stanley Donwood created for Thom Yorke’s solo album last year: an updated apocalyptic panorama stretching from the Thames estuary upstream to the Gherkin, depicting the NatWest tower, Big Ben and Battersea Power Station awash in a modern-day deluge, with a lonely Canute powerless to turn back the waves.

Like Yorke’s record, in mood if not texture, The Good, The Bad And The Queen feels under the weather, downcast and dejected. The typically titled “Kingdom Of Doom” – a grotto of Floydian feedback, and a sign of Burton’s infatuation with old-school psychedelia – turns away from the spectacle of war and finds some consolation down the pub. The rave-up of the closing title track, meanwhile, tries rather desperately to muster a bit of optimism in the thought that the same sun shines down on both the Queen and the crackheads.

The biggest surprise is how rarely this scratch supergroup really swings to its full potential. Tony Allen – described by Brian Eno as “perhaps the greatest drummer who ever lived”, and supposedly the beating heart of the project – seems oddly anonymous on half the songs. He only really cuts loose on the skittering, frenetic “Three Changes”. Simonon, similarly, seems rather underemployed. Listening to the fey grey wail and rudimentary piano of “’80s Life”, or even the lovely, meandering pastoral of “A Soldier’s Tale”, if you didn’t know better you’d readily believe this was an Albarn solo record. Both Simonon and Albarn have spoken about how relaxed recording was compared to the fractious sessions of Blur and The Clash, and you suspect what’s missing is precisely that tension and spark vital to a working band, a sense that anything is really at stake.
What ultimately saves TGTB&TQ is Albarn’s unwavering pop compass, his knack for hook and melody. Like Bowie (with whom he has a thing or two in common) however far afield may wander, his heart remains in Tin Pan Alley. It’s this pop sensibility that’s made his greatest hits, from the baggy boyband of early Blur, through Britpop and its lo-fi escape, on to the Tex Avery trip hop of Gorillaz and his present-day pan-cultural pop ambassadorship, one of the most consistently rewarding of recent years.

A couple of songs here could wind up on that collection: the gales and gloom of “Behind The Sun” clear to reveal a chorus as bright and frail as winter sunlight. And “Green Fields” (adapted from “Last Song”, donated to Marianne Faithfull for her Before The Poison album a couple of years ago) is a beautiful Goldhawk Road twilight ballad which, unusually for Albarn, is genuinely touching. He may have declared that he’s had it with the big band and public spectacle, but Damon Albarn’s feel for the secret heart of pop remains thankfully intact.