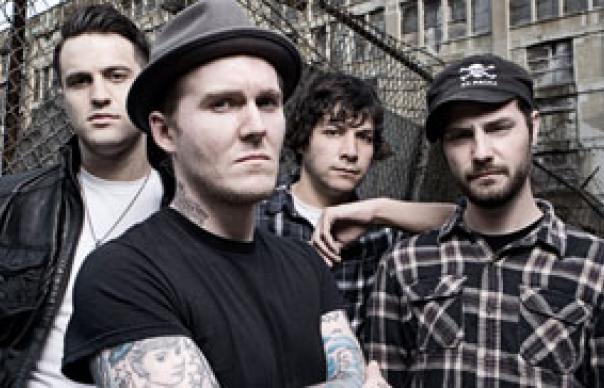 What’s American Slang? On the one hand, you could say it’s the poetry of hope, the nation’s real voice, the hardy truth unsullied by spin, the language of people let down by the American Dream, and the hot air of the politicians peddling it, salesmen practised in the grammar of deceit and dubious promise.

There’s merit also in the notion of American Slang as a reference to the diverse colloquialism of American music, the myriad vernaculars of the blues, folk, gospel, country, jazz, rock’n’roll, pop, soul, punk and rap and the single tongue in which they speak to the disenfranchised many, words and music at this point combining to lift embattled spirits, rally the troops.

American Slang is also, of course, the title of the third album by New Jersey’s Gaslight Anthem, the follow-up therefore to 2008’s The ’59 Sound, which reached out to fans of Bruce Springsteen in the same way as The Hold Steady, whose unshakeable belief in rock music as a rowdy salvation Brian Fallon’s band unswervingly share.

Because they are reckoned to owe so much to Springsteen, who famously put in an appearance with them last year at Glastonbury and was on stage with them again a few days later when he headlined Hyde Park, there has been a perhaps inevitable suggestion that American Slang will be The Gaslight Anthem’s Born To Run. The record, in other words, that will carry them into the mainstream after years of making-do and scuffling, playing anywhere that would have them and in earlier days less hospitable places, all the hard work about to pay off now in a possibly big way.

It remains to be seen, of course, where American Slang will take them, but they certainly sound here like a band going places in a hurry. American Slang is one of the most exciting rock’n’roll records since global warming hit the headlines. It’s an album of electrifying rapture, massive riffs, songs with verses that sound like choruses and choruses that sound, yes, like anthems, meant to be sung by multitudes. Listening to it, you can almost hear the stadium roar that played live these songs will likely inspire.

The ’59 Sound wasn’t exactly short of similarly communal moments, as audience sing-a-longs to many of its songs last year so noisily attested, particularly when the band played the NME Stage at Reading in front of a word-perfect crowd who were perfectly happy to sing most of their songs for them. Neither, it should be said, was their debut album, Sink Or Swim, which was likewise brimful of tracks that crude as they sometimes were still made you want to wave a flag or set fire to something and dance around it, possibly whooping.

American Slang delivers spectacularly on all expected fronts. Everything that was great about The ’59 Sound is here, but the sound is even bigger, epic without getting blustery. And there have been great leaps forward in production and the musical arrangements, which have greater depth, atmosphere and texture. Brian Fallon’s writing has moved on, too. Previously, he’s written descriptive vignettes, tales of teenage trauma, frustration and heartbreak, narratives about the lives of others.

There’s a great example of that here, a celebratory song about not forgetting where you’re from called “The Diamond Church Street Choir”, whose soulful, finger-clicking swagger owes much to the Van Morrison of “Wild Night” and “Domino” and a little to Mink De Ville, too. By and large, though, Fallon’s new songs are more personal than ever, in many respects the most autobiographical he’s written. In a general sense, they are about being who you want to be, not who you’re told you are. Songs like “Orphans”, “Boxer”, Stay Lucky” and “Bring It On” are about standing your ground, being true to yourself and what you believe in, sacrifice and hard work, a determination to make something of yourself that you may have been told you’d never be. They rail against the definition of self by others, the idea of knowing your place and staying there.

They’re a call therefore to a certain kind of insurrection – “Look what you started! I seem to be coming out of my skin,” he roars on the title track, which opens the album with the declamatory knell of “London Calling”. In many ways, they are about Fallon’s own sense of ambition, his career to date an example of where self-belief can take you, Fallon offering himself as an inspiration to others, as Springsteen and Strummer were an inspiration to him. And a consolation, too, when times were tough. “Only I can heal your wounds when you can’t go on, when you can’t go on anymore,” he sings on “The Spirit Of Jazz”, assuming a paternal role quite new to him. “Give me the children you don’t want to raise,” he sings on “Bring It On”.

Nothing irks Fallon more than the wasting of opportunity, the settling for easy options. “The Queen Of Lower Chelsea”, which has the strut of The Pretenders’ “Brass In Pocket” and quotes also from the Stones’ “Some Girls” castigates the somewhat easy target of a rich young girl who squanders her life – “Did you grow up a good girl, your Daddy’s pride? Did you make all the right moves, take all the right drugs, right on time?” – but Fallon’s full wrath is exposed on the staggering “Old Haunts”. He clearly has no patience with rueful reflection, and is similarly impatient with the solace some people find in nostalgia for a time before life got tough, a yen for the safety of an usually imagined gilded past.

“Don’t sing me your songs about the good times, those times are gone and you should just let them go,” Fallon fairly rages. “And God help the man who says, ‘You shoulda known me when’. . .Shame, shame, shame, shame on you, you sold your youth away.”

At the time of writing, a broadsheet has just published a 2010 festival guide, which includes a witty feature on what bands will provide “the definitive fists-in-the-air anthem” this summer. They list U2, Guns N’Roses, AC/DC, Muse and The Libertines. But when at whatever festival they fetch up at in the months to come The Gaslight Anthem close out their set, as they surely will, with “We Did It When We Were Young”, whose haunted atmosphere, so redolent of The Clash’s “Straight To Hell”, also brings American Slang to a dramatic climax, everyone else might as well run for cover. This is the song everyone will be singing, in a language everyone will understand.
Allan Jones