The Felice Brothers refine their sound... 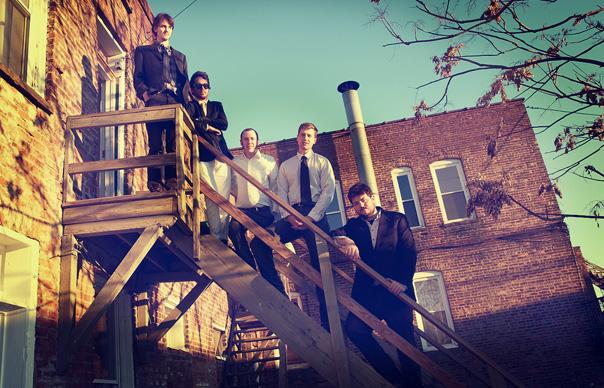 The Felice Brothers refine their sound…

The Felice Brothers’ previous proper album, 2011’s Celebration, Florida was by far their least characteristic to date – and, for that reason, arguably their most admirable. Having earned a reputation for robust, stirring, if somewhat orthodox Americana, The Felice Brothers took an abrupt left turn, incorporating electronic and hip-hop influences into a semi-conceptual conceit about a planned community built by the Disney Corporation. As startling diversions went, it wasn’t quite comparable to Radiohead unveiling an exciting new banjo-led direction, but it wasn’t far off.

The Brothers began a return to their roots with 2012’s God Bless You Amigo – a lo-fi, home-recorded collection of standards and unrecorded Felice Brothers songs, sold from their website on a pay-what-you-like basis. It seems to have resuscitated the Felices’ enthusiasm for what they started out doing, jamming in the family home in upstate in New York, busking on the New York City subway. Favourite Waitress aims for a certain pastoral simplicity. Among the very first sounds it yields are the yaps of a dog – gambolling, it seems safe to assume, in view of a porchful of strumming musicians clad substantially in dungarees and beards. The opening couplet of the opening track, the Uncle Tupelo-ish trundle “Bird On Broken Wing”, rhymes “street” with “meet”.

The Felices haven’t left behind absolutely everything they discovered in Celebration, Florida – “Saturday Night”, by far the album’s most successful ballad, suggests Tom Waits with his plinking pub piano replaced by a Roland, and a wobbly synthesizer underpins the slow verses of “Katie Cruel” before being spectacularly obliterated by the clattering, punky guitars of the album’s best chorus. In general, however, throughout these thirteen tracks, unconquered sonic frontiers are permitted to remain unconquered.

It’s to The Felice Brothers’ credit that Favourite Waitress never quite becomes oppressively earnest, though it’s a near thing at a couple of points. As a general rule, the slower the tempo, the greater the temptation to fling an empty towards the chicken wire. Favourite Waitress assuredly has its moments, but it also has its hours – the ballads are too frequent and, in the main, way too much like hard work. “Meadow Of A Dream” has a certain grandeur, but it’s difficult to listen to the words, riddled as they are with references to factory whistles, boxcars, bottles, Butch and Sundance, without checking one’s way through an imaginary Americana bingo card. “Constituents” is pretty, but impossible to listen to without anticipating, at the end of every verse, the “1-2-3-4” that might launch it higher and faster. “Alien”, again, almost works, but a heavy-handed arrangement gives it more the feel of a lecture than a hymn.

Mostly and fortunately, the Felices manage to avoid the curatorial piety which is often an unfortunate consequence of buying into a heritage, and realise that you’re allowed have fun with this stuff. The playful “Cherry Licorice” is a gleeful homage to John Prine at his daftest – think “Grandpa Was Carpenter”, “Spanish Pipedream” – right down to the cheerfully forced rhymes (“licorice”/“ridicklish”). “Lion”, lurching around a seasick accordion riff, summons something of the giddy dementia of DeVotchKa via the more anthemic tendencies of The Decemberists. “Woman Next Door” is a wondrous cowpunk romp, its churning guitars and daffy lyrics (“I came to a field of posies/I asked them how they grow/Some said ‘By the sunshine’/Some said ‘I don’t know’”) suggesting an unwritten history in which Donovan has recruited Drive-By Truckers as his backing group.

Favourite Waitress is, then, a kind of homecoming for The Felice Brothers after their exploratory digression, and by and large it’s good to have them back. It would be a shame, however, if from hereon they entirely forgot that there’s a big world out there.
Andrew Mueller

Q&A
JAMES FELICE
Why the decision to record in Omaha?
The studio is owned by friends of ours [Bright Eyes’ Coner Oberst and Mike Mogis]. And going there from here [upstate New York] gave us an opportunity to play the songs on the way. It took four days to drive there, so we played some places as we went. We took our producer [Jeremy Backofen] with us, and he listened to us play the songs, and gave us notes after the shows.

Did the songs change at all as you went?
Honestly, not much. It was good to have Jeremy in the audience, for sure, but it was mostly to get the performances right. The songs were 90% of the way there before we left, but it’s always good to hone. It was like a big camping trip.

Was the idea to reconnect with your live sound?
Yes. The idea was that if we liked how they sounded live, we’d like ’em on the record, and then we wouldn’t have to adjust anything when we toured. The songs on ‘Celebration, Florida’ we had to modify a lot to get them into the live show.

How do you feel now about the different tack you took on “Celebration, Florida”?
We’re extremely proud of that album. I think we had to make that reord, to prove we could do something different. It was a fun departure, and an interesting way to look at music – to escape the trappings of Americana or folk and stretch our arms a little bit.

Was recording this one a very different experience?
Totally. We were in Omaha for a week. ‘Celebration’ was a slog – months, on and off, with lots of experimentation. We knew what we were doing this time.
INTERVIEW: ANDREW MUELLER