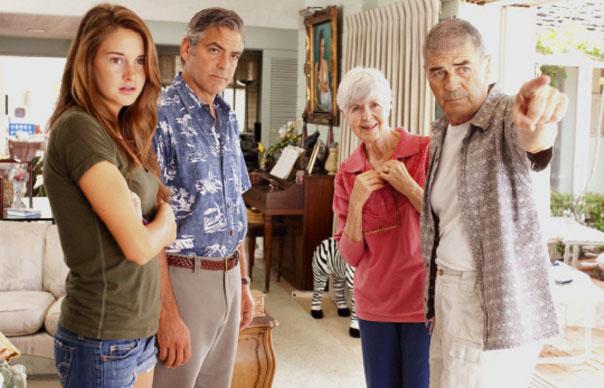 These days, only a handful of American directors can be relied on to make intelligent, enjoyable, properly grown-up films. Among them are Jason Reitman (Up In The Air, the forthcoming Young Adult), the seldom-seen Todd Haynes and – perhaps most consistently of all – Alexander Payne. The Omaha-born writer-director may have made his reputation with a high school political satire (1999 Reece Witherspoon starrer Election). But since then, Payne has specialized in stories about older males looking ruefully back at chances missed and wrong roads taken: About Schmidt, which allowed Jack Nicholson to act his weary age, and wine-steeped mid-life-crisis road movie Sideways.

At first glance, his new offering The Descendants is Payne’s straightest film yet, a tragi-comic family story about life, love, death and inter-generational misunderstanding. But this deceptively simple film – based on the 2008 novel by Kaui Hart Hemmings – is distinguished by its unusual Hawaiian location, a superb cast headed by George Clooney on top of his game, and an audacious way of wrong-footing all the expectations that accompany the gentle family melodrama this initially resembles.

Clooney plays Hawaii resident Matt King, who begins proceedings by telling us in voice-over that he’s sick of hearing that life on the island must be paradise – a point proved by shots of freeways and drab parking lots. Matt’s own life is certainly anything but blissful – his wife Elizabeth is in a coma following a waterskiing accident, and Matt is looking after the two daughters he barely knows – 10-year-old Scottie (mara Miller) and contemptuous, wayward teen Alexandra (Shailene Woodley). In addition, he has to decide how best to sell the magnificent tract of family land that’s been handed down through generations, going right back to the Hawaiian royalty who were his ancestors.

Then Matt discovers that his wife had been having an affair, and decides that it’s time to track down her lover – ostensibly so that the man can say his farewells before Elizabeth dies, but partly also in the spirit of good old-fashioned stalking. What ensues is a road trip – or in this case, an island hop – as Matt goes on the trail of the other man, accompanied by his daughters and by Alex’s clueless pal Sid (a hilariously lunkish Nick Krause) who can be relied on to say the wrong thing in any possible situation.

The film is superbly acted, both by its young unknowns and by familiar faces including Beau Bridges (rheumy-eyed and laid-back as one of Matt’s sprawling clan), a formidably blunt Robert Forster (of Jackie Brown fame) as Matt’s disapproving father-in-law, and by Matthew Lillard as the other man. You may remember Lillard as the goofy arch-slacker of the Scream films, or as Scooby-Doo’s sidekick Shaggy; it’s quite alarming how quickly he’s aged, but Lillard seems to have discovered fruitful new career prospects playing smarmy middle-aged dorks, and he rises to the challenge wonderfully.

What makes The Descendants – scripted by Payne with Nat Faxon and Jim Rash – so exceptional is its ill-mannered mischief, its willingness to step on conventional emotional sensibilities. It’s not enough that Matt and family are living through a uniquely painful situation, Payne makes the emotional comedy that much more excruciating too. In one scene, Matt steps into the hospital room for what we expect to be a tear-stained tête-à-tête with the comatose Elizabeth – only to heartily lambast her for messing up his life. Later in the film, a superb and affecting Judy Greer, as the lover’s wronged wife, gets her chance to speak some bedside home truths too. Yet, no matter how far the film goes in a black comedy direction, there’s always a sense of emotional fragility and tenderness that makes The Descendants feel not just bearable but compellingly wise too.

Few of today’s Hollywood male leads could have carried off the delicacy of this drama, or given the essentially stolid, self-absorbed Matt some substance without grandstanding or laying on the redemptive humanity too thick. But Clooney – having revealed several new layers of subtlety in Up In The Air – pushes his register even further here, and gives us cinema’s best Harassed Middle-aged Man for some time – with an ordinary vulnerability to match the greying hair. The Descendants is another film, like Sideways, that shows Payne to be a master in making something exceptional out of the almost exaggeratedly ordinary. And like Sideways, it’s at once hugely entertaining and at the same time, deep in an almost throwaway fashion. It’s about as classy and mature as contemporary American cinema gets.
JONATHAN ROMNEY