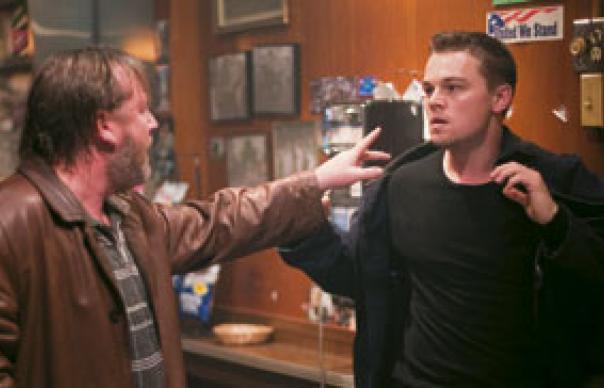 The Departed returns us with a vengeance to the wiseguy territory Scorsese last occupied 11 years ago in Casino – for many, his last great movie. The opening sequence alone is thrilling, vintage Scorsese: a burst of rock ‘n’ roll chaos – a street riot scored to the Stones’s “Gimme Shelter” – and Jack Nicholson growling in voice-over: “I don’t want to be a product of my environment, I want my environment to be a product of me.” Certainly what follows finds the Scorsese engaging with many of his favourite themes – guilt, betrayal, retribution and redemption. But for the first time, Scorsese focuses on the cops as well as the crooks.

A remake of Hong Kong action movie Infernal Affairs, The Departed is an extended cat and mouse game between Boston’s criminal fraternity and the city’s Police Department, with each side planting a mole in the other’s camp. So just as undercover cop Billy Costigan (Di Caprio) infiltrates a gang of mobsters led by the malevolent Frank Costello (Nicholson), so Costello has his own man, Colin Sullivan (Damon), inside the police department. Costigan and Sullivan are mirror images of each other: both men are from the wrong side of the tracks, both are pretending to be someone they’re not, both stand to lose their lives if they’re caught out. Scorsese explores this symmetry, letting their respective stories play out in roughly parallel arcs. He also makes much of the father-son dynamic that forms between Costello and Costigan. There’s a riff here on the relationship between Bill the Butcher and Amsterdam Vallon in Gangs Of New York: both Costigan and Amsterdam are insinuating themselves with their bosses in order to undermine them.

Perhaps inevitably, Scorsese sees similarities between the impoverished Irish families in Boston and the ItalianAmericans who populate the tenement blocks in his earlier films. He connects the levels of grinding poverty experienced by both communities, how they lead to violence, crime, drugs. But he also understands that they are worlds which inspire fierce loyalty and a rock-solid sense of community, where much currency is placed on the right surname.

Nicholson’s character is a familiar figure in Scorsese’s universe: a larger-than-life presence at the heart of the movie, a towering force of evil to rank alongside De Niro’s Max Cady in Cape Fear or Daniel Day-Lewis’ Bill the Butcher. Costello is dissolute, sadistic and, in Nicholson’s hands, spectacularly volatile. Like Mean Streets’ Johnny Boy or GoodFellas’ Tommy DeVito, you don’t know whether Costello is going to crack a joke or put a bullet in somone’s brain. In one scene, he goofs around with a dildo in a porn theatre, in another he enters a room covered in gore up to his elbows as if it’s the most natural thing in the world and casually strikes up conversation. Such flashes of tongue-in-cheek flamboyance balance Costello’s psychotic tendencies. At one point, he shoots a woman in the back of the head, then mutters to himself: “She fell kinda funny.”
This kind of grim gallows humour runs through The Departed, but there ae also many legitimate laughs, particularly the manly banter between the policemen: Alec Baldwin’s Ellerby, head of the Special Investigations Unit, and Mark Wahlberg’s abrasive sergeant Dignam exchange rapid-fire insults straight out of David Mamet. Scorsese’s cast of Alpha Males is rounded out by Ray Winstone, memorably brutal as Costello’s Number 2, Mr French, and Martin Sheen, suitably paternal as the Boston police chief Queenan, who sends Costigan into Costello’s vipers nest. The only female to venture into this boys’ locker room is Madolyn (Vera Farmiga), a police psychiatrist whose life intersects with both Costigan and Sullivan. Farmiga’s a light, lively presence caught between the bullets and the blood.

Following Gangs… and The Aviator, this is DiCaprio’s third film in a row with Scorsese, and their relationship has hit its stride. DiCaprio is outstanding as a man on the brink of mental and physical breakdown; his fierce generation of conflict and panic as Costello begins to look around for the traitor in his camp involves a phenomenal degree of stamina. Damon, too, delivers a strong performance, there’s echoes of Jason Bourne’s hard edge in Sullivan, while Scorsese deftly exploits Damon’s natural cocky charm so it becomes the engine of the character’s downfall.

It’s certainly a thrill to see Scorsese poking round those dark corners familiar from his signature movies, and the idea of remaking a Hong Kong movie itself makes perfect sense: after all, you can see much of his influence in the movies of John Woo and Wong Kar-Wai as well as the original Infernal Affairs. But this is far more than a remake: Scorsese cannot help but bring his own distinct touches to a tightly focusded crime drama, bristling with energy, tension and drama. The best of its kind since Michael Mann’s Heat.