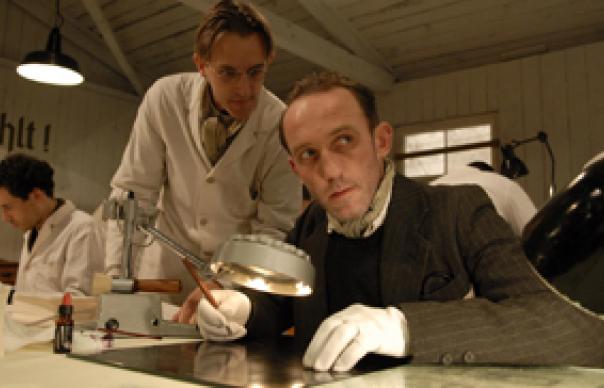 In late-’30s Berlin, Sorowitsch (Markovics) has beaten the system. A genius counterfeiter, he simply prints his own money, splashing it on gambling and women. But then comes the War, and he’s shunted between concentration camps, his life a living hell.

One day he’s mysteriously “promoted” to comparatively comfortable barracks at Sachsenhausen, to help the desperate Nazis deploy an ambitious scam. They want to forge millions of pound notes, and then dollars, flooding their enemies’ economies. Sorowitsch will lead the team. A frustrated artist, he’s good at his work, but is he that good? While the pound’s manageable, the dollar’s difficult. Failure means execution.

A pragmatist disturbed by idealists, Markovics gives a brilliantly understated performance in an engrossing, powerful film that justifies its billing as this season’s The Lives Of Others. Unspeakable horrors occur, some off screen, some in your face. The printers sabotage their own work to subvert the war effort. Frantic handheld camerawork gives the drama a wrenching, anxious undertow that dovetails with Markovics’ hangdog expression. Based on the real-life Operation Bernhard and the notorious Russian-Jewish forger, Smolianoff, this is rich with the kind of absurd truths Kurt Vonnegut would have relished.