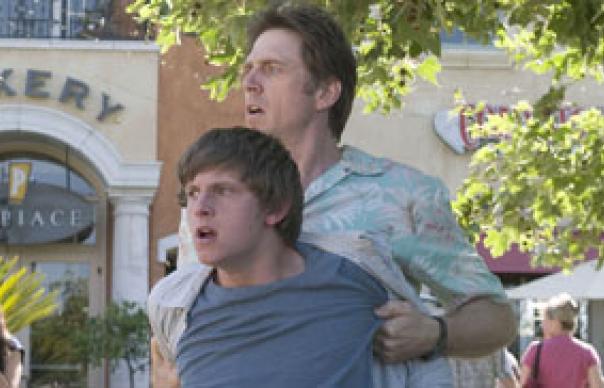 Dean (Jamie Bell) visits his only friend in the world, Troy, but finds he’s hanged himself. He doesn’t tell anyone, because “nobody will care”. Eventually, they do, but only because they want to force Dean to recover Troy’s drugs stash. Dean’s pop-psychologist father (William Fichtner) fills him to the eyeballs with medication, while his mother (Allison Janney) is herself too high to notice. In upper-class Hillside, California, both young and old are too doped-up or self-obsessed to realise there’s mayhem going on in front of their chemically-numbed noses, ravaging their bland, safe “community”.

Somewhere between Donnie Darko and Desperate Housewives, Posin’s debut is often funny and incisive, although every character is so whacked-out that it verges on the plain ludicrous. Its themes of dysfunctional families (parents as addled as teen kids) and communication breakdowns have been dealt with repeatedly before.

In what you might call the school of American Beauty, The Squid And The Whale did this best and Thumbsucker did it most similarly to what’s on view here. It’s hard to like these cosseted narcissists. Yet an acidic script that goes to some shockingly dark corners and a who’s-who of quality acting make this cynical cackle morbidly compelling.

You can watch the trailer for the movie here. Click on the links below: