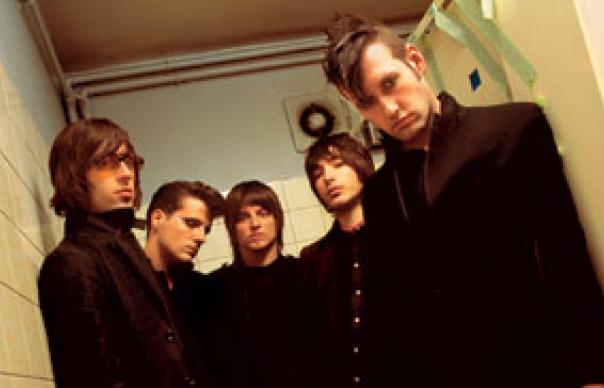 Apparently they’ve developed a new computer programme which can accurately predict the hit potential of any prospective record release. One spin of The Bravery’s debut album should blow it to smithereens. So very now it hurts, The Bravery are every record executive’s wet dream. Five ruggedly handsome Noo Yawk dudes with Lothario’s eyes for the ladies and a pervy penchant for leather and eyeliner, they make a gritty New Wave noise that is a suspiciously precise fusion of Duran Duran and The Strokes. They’re so perfect, in fact, that, to paraphrase the late Billy Mackenzie, the fault is, I can find no fault in them. This album really is just too good to be true.

Crooner Sam Endicott practically sobs with narcissistic regret, wondering over and over why the world isn’t as wonderful as he is and apologising profusely for past romantic misdemeanours he’s about to commit all over again. A liar, a cheat and yet a victim of his own dark passions, this Casablancas clone is handsomely aided and abetted by the kind of muscular whiteboy would-be funk that underpinned the New Romantic giants, while John Conway‘s pompous keyboards and Michael Zakarin‘s razor slash guitar are the very aching epitome of tacky ‘80s grandeur.

There are at least seven Killer(s) hits on the album. “Honest Mistake”, “Unconditional” and “Fearless” ( which boasts the wonderful line: “I know that’s why you love me Chico”) all recall the strident majesty of vintage Simple Minds. “Public Service Announcement”, “Ring Song” and “Out Of Line” (“Hey sweet Cassandra, remember me?”) have that sultry something of the young Lou Reed about them. And the truly vicious “Tyrant Mouth” finds our hero “stuck just like a pig roasting in your eyes”. All are pumped up to bursting by a production strung out on steroids; not so much songs as mini-melodramas frantic with testosterone, tailor-made to soundtrack future series of The OC. This album is already one of the debuts of the year. All hail The Bravery and their new bold dream.